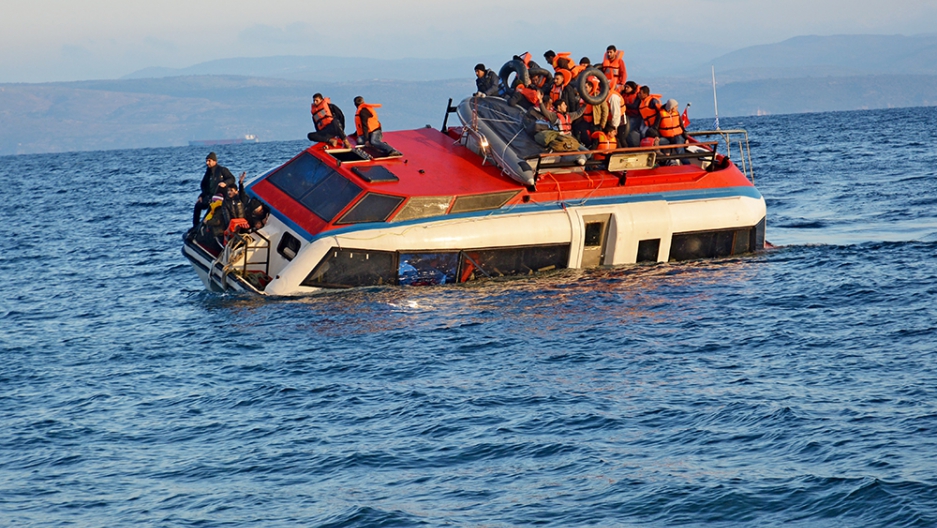 A boat with refugees sinks off the coast of Lesbos near Sykaminia on October 30, 2015. Local residents and volunteers jumped into the sea to rescue them. All were safe.

On Wednesday Lesbos was in the news again — more refugees died in another tragic incident here on the edge of Europe.

Instead of crossing from Turkey to Greece in a normal boat or ferry, refugees and migrants must pay the Turkish mafia and their collaborators to take them. This means thousands of people every day get into unsafe dinghies and wooden boats and risk a dangerous sea crossing. Now that it’s colder and high winds and rain are more frequent, we’re seeing more deaths and more strain — for the refugees on the move, for all the aid groups and for the Greek authorities and local residents who grapple with this in their towns and villages.

The toll is enormous. In the incident on Wednesday, smugglers stuffed around 300 refugees into a wooden trawler, which sank in rough seas between Turkey and Lesbos, with many trapped inside. In a major operation by the Greek Coast Guard, Frontex and local fishing boats out of the port of Molyvos, 242 people were rescued. So far, 15 people are confirmed dead. This morning, eight bodies, presumably some of the 50 to 100 people still missing, were reported to have washed up on a beach to the south. More bodies will doubtless be found.

I was on the cliffs of Efftalou in northern Lesbos watching the rescue out at sea with two off-duty officers from the Portuguese Frontex patrol currently stationed here. A helicopter hovered just over the water for a long time, bringing up survivors and dead bodies. The view of the wine dark Aegean Sea, with the green hills of the Turkish coastline across the way, is spectacular.

Sadly, this magnificent bowl of water and light has become a theater for a lethal farce. From Lesbos, using powerful binoculars you can make out the smuggler’s camps over in Turkey where they launch the boats. Turkish Coast Guard vessels troll the waters; they stop some boats but most pass. About 120,000 refugees arrived in Lesbos this month alone. That’s about 2,000 boats, 50 a day — and as the weather gets worse, there are more and more severe accidents.

On the northern coastline of Lesbos, where most of these people arrive, the stress on local communities is intense. The same day the large trawler sank, a Frontex ship rescued several rubber dinghies at sea and brought in the wet, frightened passengers to the tiny port of Sykaminia. Three children had severe hypothermia and were rushed into a tavern, which was transformed into an emergency medical clinic. I watched through the window as a doctor pumped the chest of a little girl whose heart had stopped; she was laid out on a wooden dining table with a paper tablecloth.

Almost all tourism has ceased in the village since the crisis, but this day one Greek restaurant owner arranged to have an excursion of Turkish tourists to dine at his place. Their bus pulled in just as the ambulance arrived and the tourists disembarked into the middle of a rescue. 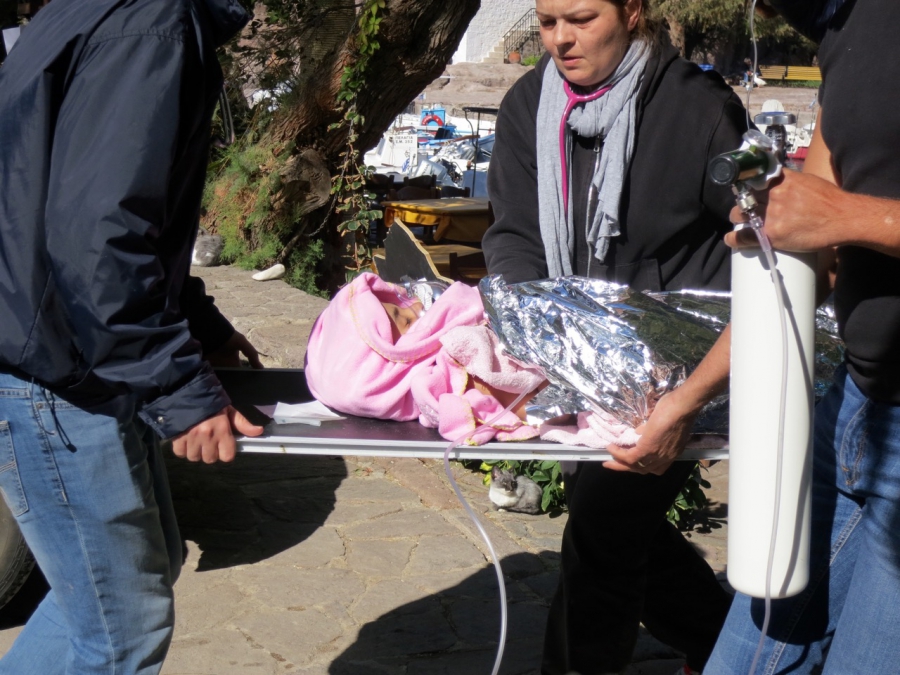 Local and international volunteers carry a 6-year-old girl from a makeshift clinic in a taverna in Sykaminia, Lesbos to an ambulance on Oct. 28, 2015

An hour later I was having lunch in a tavern a kilometer away on the beach, near the trailer that has been set up as a temporary hospital, mostly to treat children and babies. One half of the trailer is stuffed with dry clothing and the other half has a few narrow tables where an international team of Greek, Dutch and other doctors treat the children. Dr. Alison Thompson, an Australian rescue physician, is one of the volunteers. She told me 10 boats had arrived that morning in just an hour.

I was about to eat some green beans with feta when I saw the tavern owner jump up and run outside. The Spanish Proactiva Open Arms lifeguards, who are an important part of the network of small aid groups here, keep their rescue jetskis in his parking area. I went out and watched as the owner and the lifeguards heaved huge jet skis and rescue equipment down a narrow ramp into big waves to go save more lives. Once they were launched, the owner went back inside and continued his lunch with his young daughter. 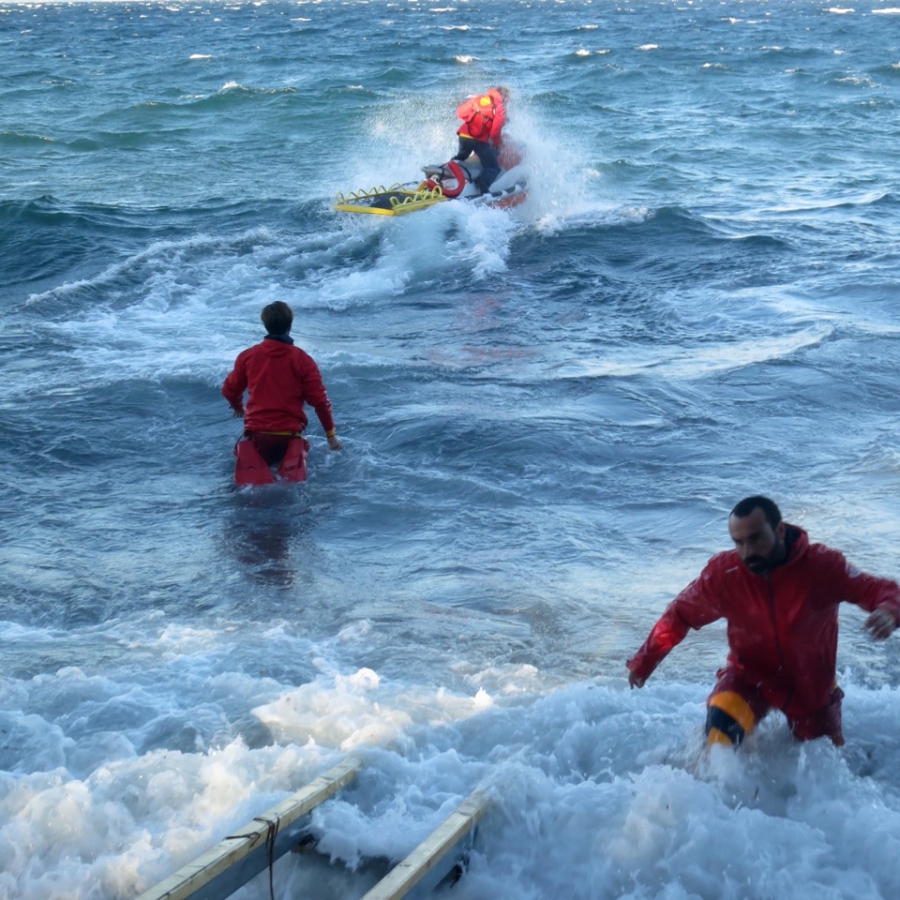 By 7 p.m. I was in Molyvos, the gorgeous city with an ancient history that rises up out of a rocky bluff topped by a well-preserved Medieval castle that has an imposing view of nearby Turkey. Like Skyaminia, Molyvos has been slammed by the refugee crisis for many months. The port, one of the most beautiful on an island with many beautiful ports, was a disaster scene with survivors from the trawler wreck huddled everywhere under metallic emergency blankets.

The small one-room church of St. Nicholas was filled with sobbing people wrapped in blankets, a scene that has a deep resonance for local Greeks who remember the Greek refugees who fled Turkey in 1922, their parents and grandparents, also sheltered inside the church.

Among the many aid workers swirling around the port was Dr. Karl Tosterud of Sweden, who had treated the girl in the tavern in Sykaminia in the morning. He told me that he had just heard from a colleague in the hospital in Mytilene that the girl was OK.

“It gives me the chills because we actually brought her back from death. We really did.” He and other colleagues revived at least three people from the trawler disaster.

My friend in Sykaminia Skyped me with the news that she and many local residents and volunteers jumped into the sea this morning at 7:30 a.m. to rescue a wooden boat crammed with 200 refugees that was sinking close to shore with people trapped inside. Thankfully, no one died this time.