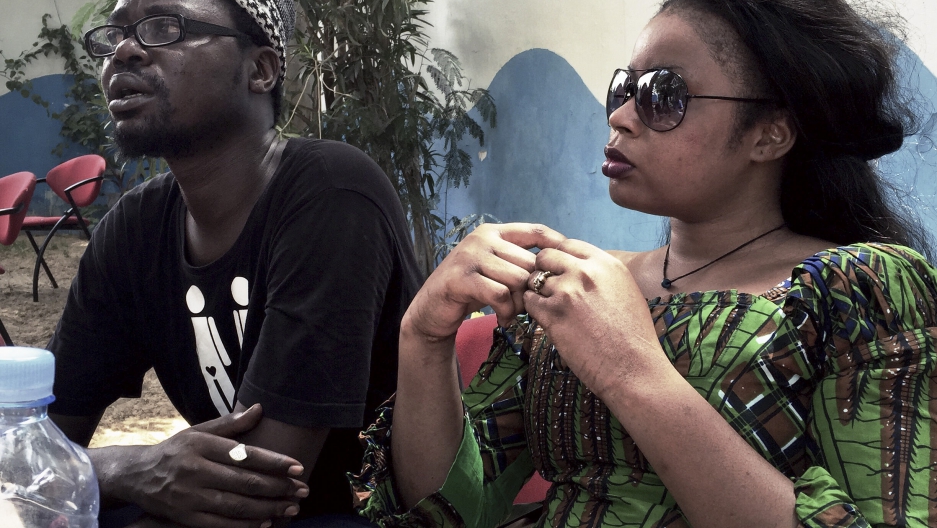 In a four-act “slam,” as it's known here — basically an episodic mix of spoken-word poetry and hip-hop — he returns to the 16th century and the trans-Atlantic slave trade. The piece is elegantly paced, structured into scenes “like a play,” Mister X explains. But the final act is one that’s still being written: “It is about the current situation of slavery in Mauritania.”

Perhaps only here in Mauritania, in northwest Africa, do musicians talk about slavery in the present tense. Hundreds of thousands of Mauritanians remain enslaved under a centuries-old, caste-like system that treats people like chattel. While the practice is illegal, there is little enforcement of the law.

More from GlobalPost: 'Slaves by the will of God': Why Mauritania has the highest percentage of slaves in the world

In the capital Nouakchott, rap has emerged as political protest music, taking on topics including slavery, racism, poverty and inequality. “Rap RIM,” as the scene is known, from the French acronym for the Islamic Republic of Mauritania, is influenced by neighboring Senegal — a cultural force — but the subject matter is distinctly local.

Mister X describes rap as both a tool of protest and “a way to unite all the ethnic groups under one banner.”

“They say this is American culture. But we understand it is something that belongs to the planet,” the 39-year-old says. “For us it’s the best way to communicate a message.”

Mister X (his real name is Cheikh Diagne) performs in 2013.

Mauritania is one of the poorest countries in the world, dominated by an Arab-Berber elite known as White Moors. The population is also made up of Black Moors, the Arabic-speaking descendants of slaves — sometimes called Haratines, which broadly means people who are current or former slaves. There are also Afro-Mauritanians, belonging to ethnic groups including Fulani, Soninke and Wolof, who were not enslaved.

“Here in Mauritania, everything is political,” says DJ MJ, who performs alongside many Mauritanian rappers at concerts including the yearly Assalamalekum festival here. “Most of the rappers are outspoken.”

One rap music video commemorates the Afro-Mauritanians targeted in state-sponsored violence between 1989 and 1991, that saw some tens of thousands expelled from the country, and hundreds killed.

This one takes on racism in Mauritania:

According to DJ MJ, rappers performing in Hassaniya — the local dialect of Arabic, spoken by White and Black Moors — are considered particularly political because they are speaking the language of power.

One such group, a popular trio called Ewlad Leblad (“Sons of the Country”), released a song late last year that criticized the government for corruption and restrictions on basic freedoms, and called for the president to “get out”:

Not long after, a member of Ewlad Leblad who is a White Moor was arrested on charges of drug trafficking and sexual assault. The other two members of the group fled to Senegal. A Mauritanian human rights group decried the arrest of Hamada Sidibouna as an attack on freedom of expression, and said the charges were politically motivated.

Mister X (his real name is Cheikh Diagne) says that when Sidibouna criticized the government, as a White Moor, people listened to him. “He is considered dangerous,” he says.

N’dat Bouwaner is a rebel for a different reason: She is one of the very few women rapping in Mauritania, defying cultural taboos.

“I had my father’s permission before starting to rap,” the 23-year-old graduate student says. “My mother was worried that music would take away from my studies.”

“They can’t imagine a young woman rapping in Mauritania,” she adds. “My lyrics are a bit macho.”

Bouwaner’s father is White Moor and her mother is of the Fulani ethnic group. She recalls appearing on a national TV show in Mauritania wearing a traditional West African dress without hijab — a common style for Muslim women in Senegal and most West African countries, but not those in Mauritania.

Instead of focusing on her music, the female host of the show interrogated her about why she wasn’t wearing a head covering.

“The woman asked me why I wasn’t wearing a veil. I replied that I am not a White Moor — I am an African,” she says. “After this encounter, I wrote a song about racism.”

"Rap gives me the chance to express myself,” Bouwaner says. “When you have something to say and you express through rap, all the young people listen.”