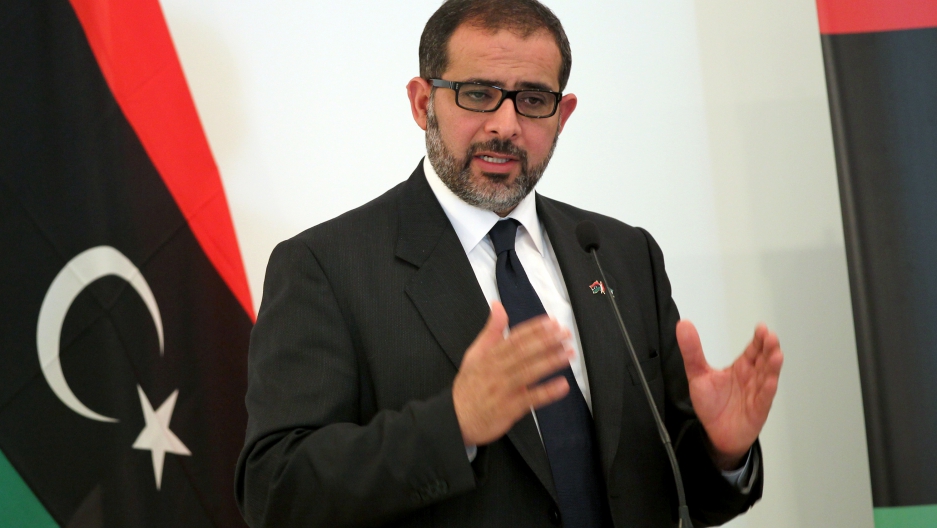 Libyan Ambassador to the United Arab Emirates Aref Ali Nayed gestures during a press conference at the Libyan consulate in Dubai on Sept. 21, 2011.
Share

Normally, that kind of thing would be big, international news.

Nayed is Libya's ambassador to the United Arab Emirates, a key player in the Middle East, and he represents the House of Representatives (HoR) faction in Libya — the one supported by the United States. He has met with leaders in Washington and London and been welcomed in the halls of Western power. Nayed is widely considered a front-runner to be the next prime minister of Libya, should the UN-sponsored talks succeed — which the US wants.

In September, Libyan operatives (and there are plenty on all sides these days) released a tape of a phone conversation between Ambassador Nayed and a military leader loyal to the HoR. In the tape, the ambassador seems to reference a previous assassination attempt and tells his colleague, “Think about the same for Khalid Shrief. How the same thing could be done for him.” Shrief, the proposed target, is a former deputy defense minister.

That there is no international political outcry for an investigation, that there have been no demands for his resignation or calls for arrest, is shocking.

One possible explanation is that the world has become desensitized to this level of political brutality in the Middle East and North Africa. Or, it’s possible that Westerners are simply distracted by migration pressures in Europe and Donald Trump in the US.

The other, less palatable explanation for the yawning over what would normally be a major scandal is the ambassador’s Western support. Mr. Nayed has access to huge resources allowing him to secure support and protection from many.

Either way, overlooking such inexcusable conduct won’t serve anyone’s long term interests. Collective silence or ambivalence on this issue will affirm the suspicions of those in the world who speak ill of the US, and embolden those who do more than speak. Inaction will also be another blow to those of us who still cling to the idea that laws matter — even in Libya.

After all, just a handful of years ago, with significant Western support, Libyans fought and won a revolution, overthrowing a regime which liberally mixed political ambitions with violence and murder. The Libyans who risked everything to make that change wanted a country in which crime was met with punishment irrespective of political ideology or influence.

Even though the political and military outcomes are far from settled, an environment of planned political killings feels more like pre-revolution Libya than the nation many expected would take hold.

That’s tragic on its own. But it’s even more so because condemning assassination and calling for justice does not feel like an act of unique bravery. Yet precious few condemnations have come. And even those are just words where action is needed.

A criminal inquiry with international participation should commence immediately. And Western governments that received and met with the ambassador should call for his removal from office pending the outcome or, at least, revoke his diplomatic access. He should be answering questions from a judge, not breaking bread with prime ministers.

It is possible that these tapes are doctored to implicate Nayed and he’s done nothing wrong. It’s also possible that he’s complicit in at least one assassination attempt and involved in planning another. All sides — even those internationally — should want the truth. He should either be in jail or have his name cleared. That’s why there needs to be an inquiry and probably a criminal trial.

Emadeddin Zahri Muntasser is a founding board member of the Libyan American Public Affairs Council. He lives in Boston and has met recently with leaders at the US State Department, US Congress and Libyan delegates to the UN peace process.