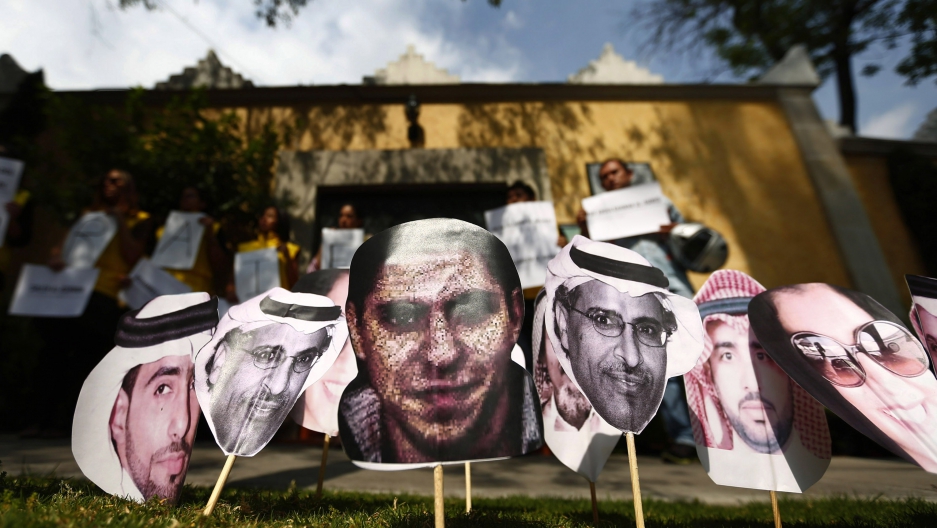 A picture of Saudi blogger Raif Badawi (C) is seen between others photos of prisoners in Saudi Arabia during a demonstration for his release from jail outside the Embassy of Saudi Arabia in Mexico City.

The Saudi government ordered that Badawi receive 50 lashes every Friday for 20 weeks. Video of the first round of lashes on Jan. 9 sparked outrage around the world.

Badawi’s scheduled floggings were soon postponed on medical grounds, according to Amnesty International. As the group has pointed out, flogging — a punishment for a number of crimes in Saudi Arabia — is “prohibited under international law, along with other forms of corporal punishment.”

The UN has called upon Saudi Arabia to end Badawi’s flogging, and to review the “harsh” form of punishment.

First arrested in 2012 for insulting Islam as well as disobedience, Badawi founded a site called Free Saudi Liberals in 2008. Originally, prosecutors wanted to place the blogger on trial for apostasy — which carries the death penalty — but a high court tossed out the charge in 2013. Authorities shut down Badawi’s website in 2012, shortly after his arrest.

On Thursday, Badawi was awarded the European Union's Sakharov prize for human rights and freedom of thought. The head of European Parliament Martin Schulz took the opportunity to call on Saudi Arabia to set the blogger free.

"This man has had ... imposed on him one of the most cruel penalties, which can only be described as brutal torture," Schulz said. "I call on the Saudi king to immediately free him."

Apart from casting an international eye on Saudi Arabia’s brutal brand of punishment, some believe that this case ultimately highlights the government’s fear of dissent.

Hala al-Dosari, a US-based Saudi activist, told the Independent that the country silences dissident voices because “they don’t want people to start questioning religion, the legitimacy of the Saudi ruling family, or the distribution of wealth.”

Badawi’s story comes at a time when free speech is in the international spotlight, following the Charlie Hebdo attacks in Paris. As millions marched in Paris last week in support of freedom of expression, Saudi Arabia's ambassador to Lebanon attended a solidarity rally in Beirut.

But Saudi Arabia, like many of the countries represented, has a bad habit of violating free speech.

The same year of Badawi’s arrest, a blogger named Hamza Kashgari faced the death penalty for tweets allegedly insulting Prophet Muhammad. While he was not executed in the end, he was still jailed for two years.

While online censorship is nothing new for Saudi Arabia, the country has become more rigorous in policing speech online in recent years, particularly after the so-called Arab Spring in 2011.

The law, passed last April, says that terrorism is anything that "disturbs public order, shakes the security of society, or subjects its national unity to danger, or obstructs the primary system of rule or harms the reputation of the state."

So what’s the reason behind the heightened crackdown on dissent? Stability. The government has been fearful of being touched by wider turmoil in the region.

But Saudi Arabia’s east, home to the country’s marginalized Shia minority, has seen unrest since 2011. Their demands are not far off from those heard across the region: “government reform, a constitution, and greater power for elected bodies.”

Back in 2011, Saudi Arabia even sent in troops to neighboring Bahrain, in order to help clear out popular protests at Manama’s Pearl Roundabout.

All eyes on Saudi Arabia

While it looks like Saudi Arabia’s war on dissent is here to stay, international pressure might be the key to securing Badawi’s release.

Badawi's wife, Ensaf Haidar, who now lives in Canada with the couples’ three children, told the Guardian that if “all the governments in the world” placed pressure on Saudi authorities, it could secure her husband’s release.

While the US, as well as other governments have raised concern over the blogger’s case, some believe that the only way to send a clear message is through economic pressure. Saudi Arabia and Bahrain, which enjoy cozy relationships with both the US and UK, have been accused of prioritizing their strategic relationships over human rights.

Still, Haidar has refused to give up:

“I won’t stop [fighting] until Raif is free,” she told CBC.

This story is cross-posted by our partners at GlobalPost.