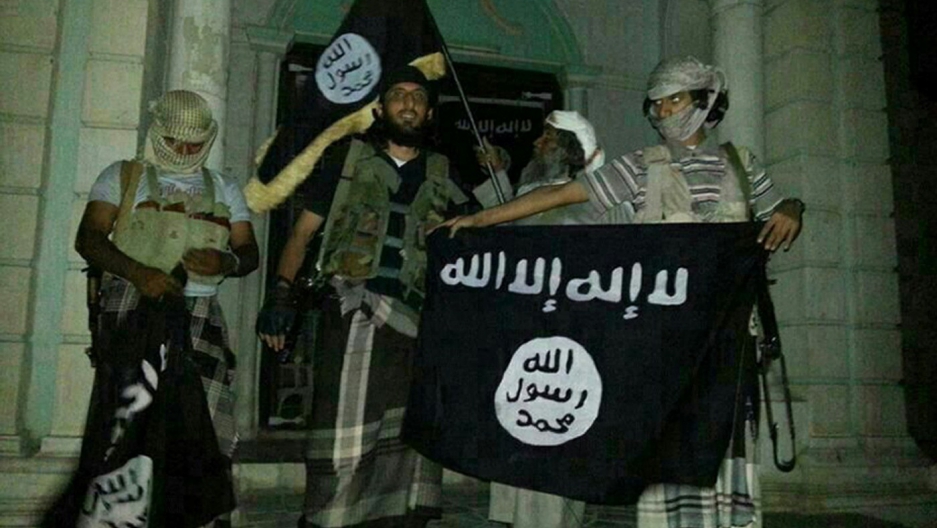 A picture taken with a mobile phone early on May 24, 2014 shows Al Qaeda militants posing with Al Qaeda flags in front of a museum in Seiyun, second Yemeni city of Hadramawt province, after launching a massive pre-dawn assault that killed at least 15 soldiers and police.
Share

Remember the underwear bomber who almost blew up a plane over Detroit? How about the explosives-packed printer cartridges that were found on US-bound cargo planes? Those attacks on the US were foiled, but the folks who launched them are still in business.

Al Qaeda in the Arabian Peninsula, or AQAP, has maintained its operations in Yemen — and expanded, filling the security vacuum created by the Yemeni civil war. The group has been spared from air strikes by the Saudi-led coalition, and only nominally threatened by the rebel Houthis, who are pre-occupied with defending previous territorial gains.

AQAP has shored up tribal support in parts of the east and south of Yemen, and it effectively controls the huge Hadramout province, stretching from the Saudi Arabian border to the Arabian Sea, including a major seaport, Al Mukalla. "It has been using the port city as a base from which to support a front line against the Houthis," says Katherine Zimmerman of the American Enterprise Institute. She monitors events in Yemen via Arabic language news sources and social media.

"AQAP is effectively moving in supplies, training individuals and then shipping those forward to the front lines to fight against the Houthis within Yemen's civil war," she says. "AQAP actually sits on top of a tribal network. It has local knowledge of who can deliver what arms, and these are historic black market smuggling networks that haven't been shut down in decades — centuries. They're not going to be closed that easily."

Al Qaeda in the Arabian Peninsula, founded in 2009, was built up from previously established Al Qaeda branches in Saudi Arabia and Yemen. Its jihadist message, training expertise and weapons-making ability make it a potent force for radical Islam. In its inaugural year, AQAP's name was invoked following two deadly attacks in the US: at an Army recruiting station in Little Rock, Arkansas and at Fort Hood in Texas. On Christmas Day that year an AQAP-trained suicide bomber — the "Underwear Bomber" — attempted to blow up a Detroit-bound jet. In 2010, AQAP tried twice to bomb Chicago-bound cargo planes with explosive printer cartridges.

AQAP's online magazine, Inspire, began publishing in 2010. An article in it's debut issue, "Make A Bomb in the Kitchen of Your Mom,” showed how to build a lethal weapon from items found around the house, including a pressure cooker. The 2013 Boston Marathon bombers may have taken their lead from that issue of Inspire, which was found on a computer belonging to convicted bomber Dzhokhar Tsarnaev.

In January this year, AQAP claimed credit for the attack in Paris that left twelve people dead at the offices of the magazine Charlie Hebdo, and killed five others in subsequent attacks. Recently, Inspire published an article that lays out how the Charlie Hebdo killings were planned and executed.

"The Yemeni branch of al-Qaeda is the al-Qaeda node that has actually conducted the most transnational attacks against the United States since 9/11," says the AEI's Zimmerman.

The United States, until last year, relied on the Yemeni government to help it keep the local branch of Al Qaeda in check. Yemen's civil war has put an end to that. "The Yemeni military [is not] in any condition to resume a counterinsurgency or even counterterrorism campaign against AQAP," says Zimmerman in "A New Model for Defeating al Qaeda in Yemen," a white paper published as part of the AEI's Critical Threats project. "The security forces are fractured, badly damaged (in part by the Saudi air campaign), and preoccupied with fighting each other. The entire basis of the US strategy in Yemen hitherto has been utterly destroyed."

With no partners on the ground to fight Al Qaeda in Yemen, the United States must rely on targeted air strikes against AQAP leaders. "Targeted airstrikes by the US have removed key leaders from the battlefield in 2015, although [AQAP] will probably be able to recover from those losses." Zimmerman argues that AQAP's strength does not rely on particular leaders, but on the group's broad appeal to Yemen's disenfranchised tribal groups. "Part of its resilience has come from AQAP's ability to exploit local popular grievances," she says. For example, Hadramout, which is governed in concert with AQAP, gets high marks from the World Food Program for making food and fuel widely available.

As AQAP is increasingly seen to be meeting basic needs of Yemenis, its local support can only grow. "The problems in Yemen are long-term grievances against the Yemeni state," reminds Zimmerman. "That's what's behind the current civil war."

Right now, Zimmerman believes the US should be taking a more active role in resolving the conflict in Yemen, "because the longer the war drags out, the stronger al-Qaeda — and ISIS — are getting in Yemen." She also proposes that the US work with non-state actors to fight against al-Qaeda in the east. "There are tribal groups that are both anti-government ... but also very much anti-al-Qaeda. And they are willing to fight [against AQAP]. ... They just need some sort of support and backing."

Zimmerman admits that getting the United States involved on the ground in Yemen may be a challenge. "It's really hard to put Yemen on top of the priority list, and frankly its not. When you are looking at the threats the United States faces, Syria is certainly much higher than Yemen," she observes. "But when you are looking at the threat from the global jihadist movement, then Yemen falls into place."

This story is cross-posted from our partners at PRI's The World.