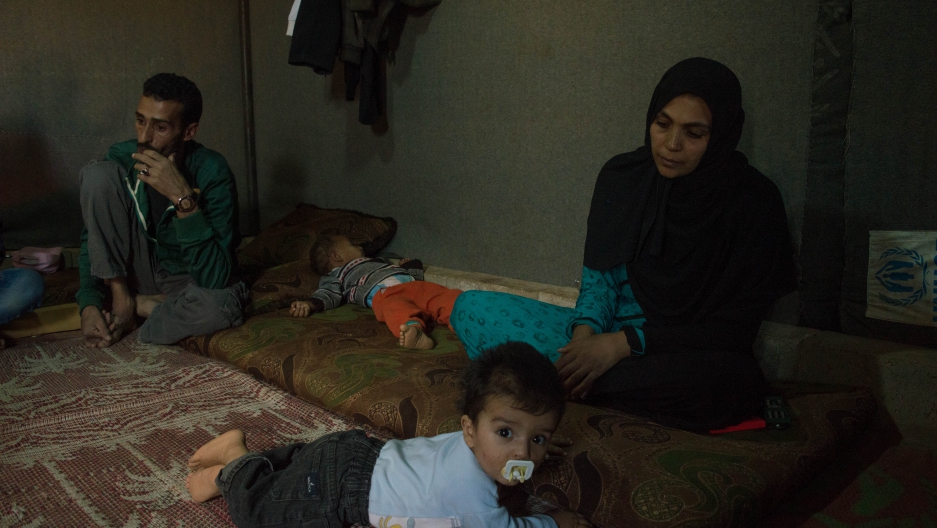 ZAATARI, Jordan — It was four years ago, when war broke out in Homs, that Khaled al-Nibeeti and his family fled their home for the first time.

They traveled to Palmyra, then to the desert nearby. When airstrikes there made them too afraid to light their tent at night they left Syria altogether, spending their last money on checkpoint taxes and a rented car to reach Jordan.

In Jordan, they moved from Zaatari refugee camp to the overcrowded city of Mafraq, eventually finding safety in Zaatari village, six miles from the Syrian border. They stayed there for a year and a half.

This week, they’ll travel again. But at a time when hundreds of thousands of refugees are making their way to Europe, this family is doing the unthinkable: returning to the war-ravaged country they once fled.

“I’d prefer to die in Syria,” Khaled al-Nibeeti told GlobalPost, rocking his 1-year-old son Mohammed to a fitful sleep. The baby has been ill for seven days, but the family can’t afford to pay for transport to see a doctor or get medicine. “It’s better for me to die in Syria than live here, when life in Jordan is so hard.”

More from GlobalPost: The daily hustle to survive: This is the life of a Syrian refugee

Al-Nibeeti is one of thousands of Syrian refugees returning to their home country — a decision that increasing numbers have been driven to in recent months. This week he’ll sell his belongings, speak with the UNHCR at Zaatari camp, and take his family to board the bus to the border. It’s a journey with no return ticket and an uncertain end: Khaled knows his brother, who lives near Palmyra, will help him out, but he has no idea what dangers might prevent him from reaching his destination safely, if at all.

“We’re not thinking about the future,” he said. “We’re thinking just about how we live day to day. Here, there is no future.”

According to the United Nations, more than 100 Syrians have been leaving Jordan for Syria every day in recent months. They’re fleeing poverty, frustration and hopelessness: the sharp end of a humanitarian crisis that has dragged on for more than four years. With some 630,000 Syrian refugees currently registered in Jordan, the resources to provide them with food, shelter and support have been thinly stretched for too long. Now, aid cuts mean the most vulnerable are struggling to survive.

Um Faisal, a Syrian refugee living in Amman, is among the thousands thinking of heading back to Syria.

“Before, there was always something. People would come with a food box, a bit of help,” al-Nibeeti said. “Now there’s nothing. We go to the supermarket and we just buy everything on credit. There’s nothing new.”

The gravity of the crisis facing al-Nibeeti and others like him is perhaps best illustrated by the World Food Program’s rapidly shrinking allowance for refugees. In the past, Syrians received 24 Jordanian dinars (about $34) per person, per month to buy food. By September, that had been cut completely for 229,000 people, and reduced to just 10 dinars for the most vulnerable.

The aid is the only source of sustenance for many refugees. Although it’s been reinstated this month, al-Nibeeti says he only receives enough assistance to feed his family for about ten days.

For the vast majority of Syrians who, like al-Nibeeti, live outside the camps, the situation is most serious. The cost of living is high in Jordan: Many struggle to make rent, and it’s now commonplace for families to take children out of school so they can work. An estimated 86 percent of urban Syrian refugees are living below the Jordanian poverty line.

More from GlobalPost: One village in Lebanon is hosting more refugees than the entire United States

“What people don’t always understand is that the World Food Program cuts coincided with cuts in other organizations — smaller NGOS that have been helping the refugees out with rent and so on,” Shada Moghraby, a spokesperson for the WFP, said. “Needless to say, with the impact of the cuts we’ve seen families resorting to emergency coping mechanisms. We’ve seen early childhood marriage, begging.”

“In Syria there is only death. But it’s better to die in Syria than to live here in the dirt.”

Among refugees poverty has led to despair; constantly changing news about the help they can access, delivered by text message, is leading many to feel angry with the UN. In the clean, sparsely furnished tent where al-Nibeeti lives with his wife and five children, he and his neighbors debate rumors that food aid for Syrians will be cut altogether.

“If the food allowance stops for good, you won’t find any refugees in Jordan,” Khaled Faris argues. For him, returning to Syria still means death, and going back to a war zone is unthinkable. But he, too, is looking for a way out of Jordan, preferably to Europe.

An hour’s drive from Zaatari, Um Faisal is making the same decision. Her home in Amman is almost empty now: Three suitcases surrounded by scattered belongings sit waiting for the trip she and her two sons will make to Istanbul at the beginning of November. After that, she says, she’s not sure what she will do.

After landing in Turkey, Um Faisal has no idea what she will do aside from connecting with other family members. “You tell me, what should we do? We’ll take anything.” The vague plan is to head for Reyhanli, close to the Syrian border. It would be better to stay in the desert, she says, than come back to Jordan.

Poverty is only part of the problem. Both Um Faisal and al-Nibeeti only stayed in Zaatari, Jordan’s largest camp, for a few hours — they say being trapped in the overcrowded tent city, where crime is reportedly rife, was unbearable. But in Jordan’s towns and cities, they’re unable to work legally and see no opportunity to improve their circumstances.

Once he’s left for Syria al-Nibeeti won’t be able to return to Jordan, but he remains single-mindedly committed to the dangerous journey. “I’m out of my mind. I’m up awake all night until the morning, all the time I’m thinking of what I can do for my family, how I’ll live. There’s nothing I can do.”

Last month, UN reports indicated that the flow of refugees back to Syria stabilized — a development related partly to the heightened civilian risk brought by Russian airstrikes in Syria. Whether the trend will continue as conditions worsen into the winter, however, remains to be seen. In a survey of 500 refugees released by the UN in September, 49 percent said they were considering leaving Jordan. The majority of those wanted to leave because they had no means to survive, and 13 percent said they’d go because they saw no future in the host country.

“There’s no future in Syria, in Syria there is only death,” she said. “But it’s better to die in Syria than to live here in the dirt.”