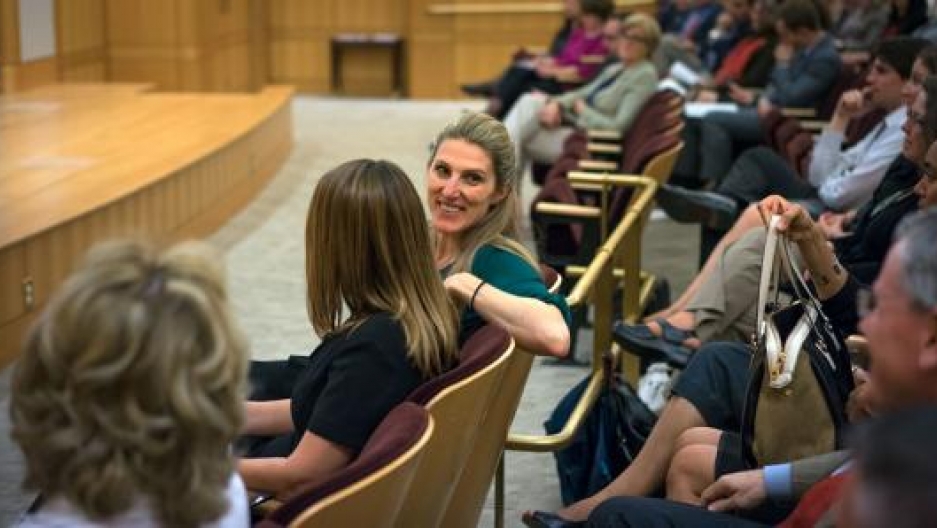 Dr. Vanessa Kerry at the Global Health Speaker Series in 2014.

US Department of State

Growing up, Vanessa Kerry always knew she wanted to be a doctor, but when she was 14 she visited Vietnam with her father, current Secretary of State John Kerry, and what she saw there has haunted her ever since.

"There was a true poverty that pervaded every corner of the country," she said. "There were so many children with ripped clothing, [and] no shoes. There were no stores, often no electricity, [and] no running water. Houses were concrete blocks with cloth for doors, if they had anything at all."

Through that experience, Kerry found her calling. She would strive to close the gap in health care between her world and the world’s poorest. It's that same gap that led to last year’s Ebola outbreak in West Africa, she says.

"Ebola would not have happened in the way it happened, and the size it happened, if there had been a strong enough health system in place, and enough skilled professionals to recognize the disease early and be able to quarantine and act on the appropriate steps to shut the disease down,” Kerry said.

Today Kerry is a physician at Massachusetts General Hospital. She is also the co-founder and CEO of the nonprofit Seed Global Health. For the past couple of years, Kerry’s organization has partnered with the Peace Corps and the President’s Emergency Plan for AIDS Relief. Together they run a program called the Global Health Service Partnership, which is trying to address the lack of skilled doctors and nurses in several African countries.

According to Kerry, last year the partnership sent out 42 American volunteers who trained more than 4,000 medical professionals in Tanzania, Malawi and Uganda. Their service fulfills one of the original goals of the Peace Corps when it was first proposed by John F. Kennedy back in 1960.

Kerry recalls how during a presidential campaign speech, Kennedy asked a crowd of students at the University of Michigan in Ann Arbor, “How many of you, who are going to be doctors, are willing to spend your days in Ghana?”

Kerry says her volunteers are helping east African countries build a credible health care system — one that can take on many illnesses, including infectious disease.

“To stop a pandemic from reaching the United States or France or wherever, you’ve got to go to the root of where that pandemic is,” Kerry said. “If that is Sub-Saharan Africa, that is where our folks are working, and I think that contribution is going to be critically important to any surveillance and prevention that we do.”

Kerry’s approach is similar to another Boston-based group: Partners in Health.

“It seems to be common sense, really, that if you’re always putting out fires and you don’t invest in your sprinkler system, then you’re not going to be able to deal with the small emergencies when they arrive,” said Dr. Louise Ivers, a physician at Brigham and Women’s Hospital, and an advisor to the aid organization.

In Sierra Leone and Liberia, investing in your “sprinkler system” means supporting local health care workers. It is something that is especially important now that most foreign volunteers who helped during the Ebola crisis, have gone home.

“Partners in Health has hired a large number of Ebola survivors to work as community health workers,” Ivers said. “This has been seen as a very important contribution, both to the reintegration of survivors into their livelihoods and offering them an opportunity to start over again.”

Ivers says investing in local health care systems can make a big difference. She points to Haiti, where she has worked for the past 12 years. The Haitian physicians and nurses supported by Partners in Health were able to respond to the country’s earthquake in 2010, and they also helped contain a major cholera epidemic with a vaccination campaign against the disease.

There may be challenges ahead, but if Kerry and Ivers are successful, Kerry believes that one day there will be an army of well trained health care workers in Africa. She is now planning to extend her program to Swaziland.

“We can’t answer what the next thing is going to be, but we can ensure that there is a cadre of smart people ready to respond and to recognize a problem when it happens early,” Kerry said.

Those people will be ready the next time an epidemic strikes.

A version of this story first appeared on WGBHNews.org. It is part of a series by WGBH News, The GroundTruth Project and NOVA called "Next Outbreak."