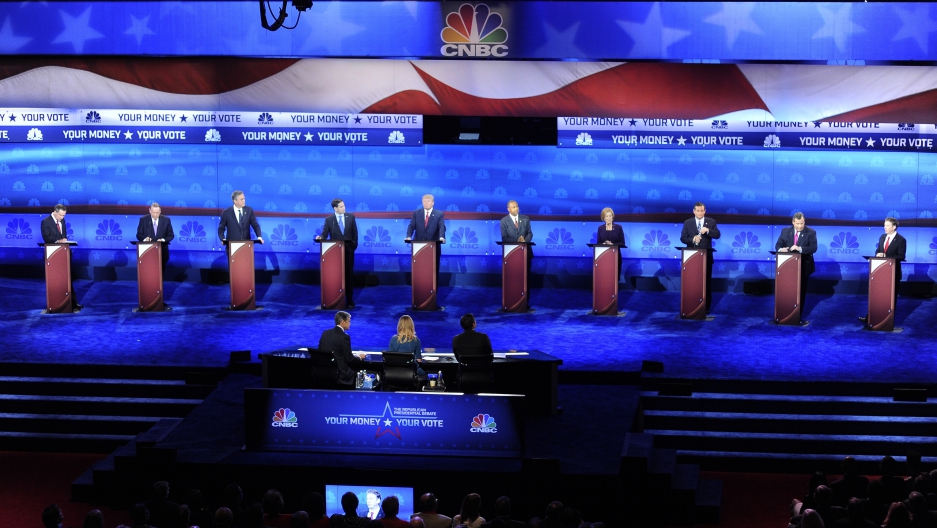 For Republican politicians, whining about the media comes as naturally as invoking misty memories of Ronald Reagan. It’s a sure-fire applause line, as complaints about the liberal press play into the right’s extravagant sense of victimhood. And there are occasions when those complaints are actually on the mark.

Wednesday night’s presidential debate was one of those occasions. The CNBC panelists turned in a performance that I’m sure was intended as an aggressive attempt to hold the Republican candidates to account. It came off instead as sneering and disrespectful in tone, petty and irrelevant in substance.

Asked about the compromise on the debt limit that Congress seems likely to approve, Ted Cruz responded with a devastatingly accurate summary of the proceedings that had unfolded up to that point.

“The questions that have been asked so far in this debate illustrate why the American people don’t trust the media,” Cruz said as the audience applauded (exact quotes based on a transcript published by The Washington Post). “This is not a cage match. And, you look at the questions — ‘Donald Trump, are you a comic-book villain?’ ‘Ben Carson, can you do math?’ ‘John Kasich, will you insult two people over here?’ ‘Marco Rubio, why don’t you resign?’ ‘Jeb Bush, why have your numbers fallen?’ How about talking about the substantive issues the people care about?”

In case you missed the debate, let me assure you that Cruz was not exaggerating. Those were actual questions asked by debate panelists Carl Quintanilla, John Harwood and Becky Quick. Several other CNBC hosts popped up in cameos, with the unhinged stock-market cheerleader Jim Cramer and the original Tea Party instigator Rick Santelli competing to see who could yell louder.

“All of the highlights — ALL of them — will be about candidates slamming the terrible questions and conduct of debate,” tweeted conservative commentator Hugh Hewitt afterwards.

On CNN, Republican National Committee chair Reince Priebus seethed with righteous indignation when Dana Bash stuck a microphone in his face. “I’m very disappointed in the moderators, and I’m very disappointed in CNBC,” he said. Bash and Anderson Cooper, who was on the anchor desk, agreed that they’d never seen anything quite like Priebus’ pique. “For him to come out and bash the network, I was pretty surprised,” said Bash.

If there was a takeaway worth noting, other than CNBC’s conduct, it involves who might have actually won the encounter. Count me among those who believed the most important contest was between Jeb Bush and Marco Rubio, the theory being that one of them is likely to emerge as the nominee after the novelty candidacies of Donald Trump and Ben Carson fade.

And yes, there was a clear winner. That’s Rubio you see bouncing around the ring, fists in the air, while Bush is lying unconscious on the canvas with his tongue hanging out of his mouth. With his campaign fading and his continued viability on the line, Bush delivered what may have been the worst in a series of uninspiring debate performances, although I would have no problem letting him make my fantasy-football picks for me. (He’s 7-0!)

Rubio, meanwhile, was crisp, focused and able to turn aside tough questions without quite answering them, as he did with one from Harwood about the Tax Foundation’s criticism of his tax plan.

Rubio skillfully went after the media as well. When Quintanilla asked him about an editorial in the Sun Sentinel of Fort Lauderdale, Florida, suggesting that he resign for missing too many Senate votes, Rubio responded that the paper had endorsed Democratic presidential candidates John Kerry and Barack Obama despite their having compiled similar records. “This is another example of the double standard that exists in this country between the mainstream media and the conservative movement,” Rubio said. Later, after Trump denounced Super PACs (with no follow-up from the intrepid panelists about Trump’s recent close encounter with a Super PAC), Rubio interjected, “The Democrats have the ultimate Super PAC — it’s called the mainstream media.”

But Bush versus Rubio was the undercard. The main event matched Trump against Carson. According to the most recent New York Times-CBS News poll, Carson now leads Trump nationally for the first time, with a margin of 26 percent to 22 percent. Everyone else is in single-digit territory.

So how did they do? I’m not in a good position to judge. I have no patience for Trump’s arrogant anger about Mexican immigrants or for Carson’s soft-spoken absurdities about the Holocaust. For what it’s worth, social-media analyst Dan Diamond tweeted that Carson led the field after the debate by gaining 6,200 new followers on Twitter (he has 838,000 overall). Coming in second was Rubio with 4,200 (924,000 overall) and Trump third with 3,500 (4.7 million). We’ll probably have to wait a day or two for a more scientific poll.

The story that’s likely to linger, though, is CNBC’s conduct. Two generations ago, Spiro Agnew denounced the press as “nattering nabobs of negativism,” thus helping to define the conservative case against the media. On Wednesday night, Carl Quintanilla and company turned in a performance that will be remembered by the media’s conservative critics for a long time to come.

Update: A Harwood tweet cited above was posted on October 14 and obviously did not refer to anything that happened at the debate. The line has been removed.