Standing passengers on a crowded bus in Bogotá might not feel so lucky, but at least they’re burning more calories than people who sit during the commute.

We all hate traffic. But did you know that sitting in traffic can be bad for your health? And I’m not talking about your mental health.

I’m not trying to make you feel guilty about driving to work, if that’s what you do. I drive into the office most days. But city and regional planner Daniel Rodriquez at the University of North Carolina has some bad news for us.

“If you think about the automobile, motorization means that we live in a more sedentary way, we’re physically inactive,” says Rodriguez. “And that has consequences in the long-run for obesity, and probably for diabetes and other diseases.”

We all understand that it would be better to bike or walk to work. But what if you live clear across town and that’s just not practical? Or, you don’t like biking? Or you don’t want to arrive at work all sweaty?

Olga Lucia Sarmiento at the University of the Andes School of Medicine in Bogotá says for a healthier commute, don’t overlook the bus.

“If you use your car, you just go to the garage and take the car,” says Sarmiento. “But we have found that when you ride your bus, you at least walk to a station.”

Bogotá has an extensive rapid transit bus system called TransMilenio. Sarmiento’s research shows the average bus passenger in Bogotá walks 12 minutes a day to get to their stops. That might not sound like much, but it adds up to an hour a week, which is 40 percent of the weekly cardiovascular exercise we need, according to guidelines from both the Centers for Disease Control and Prevention and the World Health Organization. (The CDC also recommends muscle-strengthening activities twice a week.)

Most people in Bogotá walk those extra steps to the bus because they have to — it’s estimated that only 20 percent of Bogotános own cars. Car ownership is some four times higher in the US. Here's another statistic: 86 percent of Americans commute by private vehicle.

Sarmiento pulled up some numbers looking at the health of Colombians: 34 percent of men and 35 percent of women are overweight. By comparison, 69 percent of Americans are reported as overweight.

Of course, this dramatic difference can’t entirely be attributed to more Americans sitting in cars. There’s diet, exercise, genetics and other variables.

Still, before you dismiss the bus vs. car healthy living theory, as I’m now trademarking it, let’s hear from another Colombian doctor who studies public health issue. Luis Fernando Gomez, a professor with the School of Medicine at the Pontificia Universidad Javeriana in Bogotá, says not only does walking to the bus deliver health benefits — standing during your commute helps too.

“We have conducted several studies: people who use the car in Colombia are more likely to have abdominal obesity,” says Gomez. (That’s the medical term for having a pot belly.) “Sitting is very bad, it’s very bad.”

And you get a little bonus workout standing on the bus in Bogotá — when bus drivers slam on the brakes, you need to hold on tight.

“You need to burn energy,” says Gomez with a chuckle. 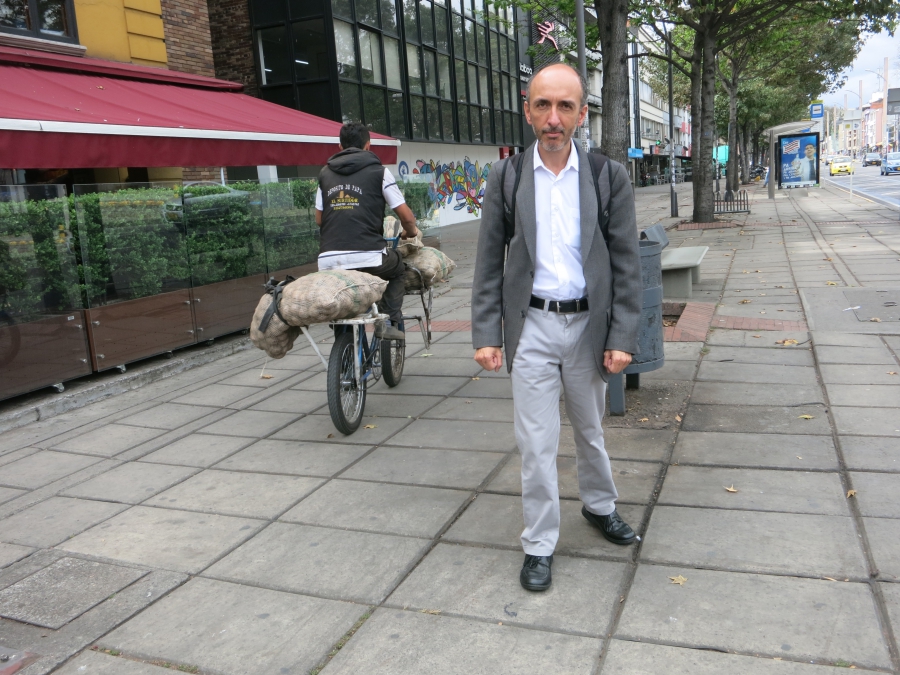 Bogotá has many extra-wide sidewalks, ideal for walkers like Luis Fernando Gomez.

Now, I know what you’re probably thinking right now: It’s hard to imagine a less pleasant way to burn calories than holding onto a hanging strap on a crowded, sweaty bus during rush hour. And the car is so much quicker and more convenient than the bus or train. You think: I’ll just go for a jog or a swim, or play some basketball after work. Plus, vigorous cardiovascular exercise provides the same benefits as walking in less than half the time.

But put yourself in Latin America. Many cities there, like Bogotá, don’t have as many parks, swimming pools and gyms, compared with US cities. Recreation options in Latin America are much more limited.

Gomez — who is in good shape — says studies show that many urban-dwelling Latin Americans get their exercise the way he does. He walked 20 minutes from his apartment to the bus to get to our meeting. (As an aside, Bogotá is a great walking city, with lots of extra-wide sidewalks.)

So if you don’t have time to get to the gym this week, consider walking to the bus or train — if that’s a possibility — to get a little extra motion in your week. Studies show that sitting in traffic is also bad for your mental health.

And one last thought about the bus vs. car debate, with regards to our public health: More people riding buses and trains mean fewer cars on the road, which translates into less smog and greenhouse gasses coming from our tailpipes. Yes, many big buses spew more tailpipe emissions than cars, but those buses will be making their routes today no matter how many passengers are on board.