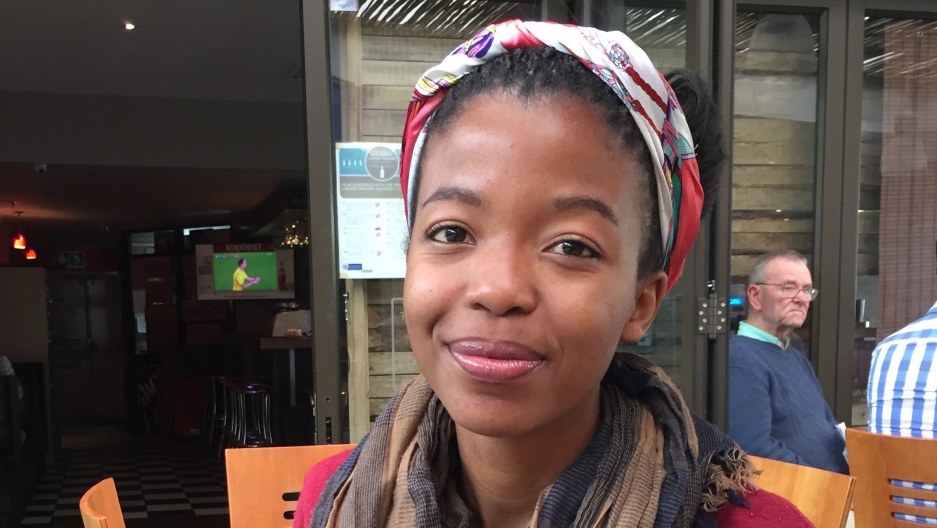 Mapaseka Setlhodi is part of South Africa's "born free" generation, but she says her government has failed to fulfill its promises to young people like her.

Mapaseka Setlhodi sits in a coffee shop not far from the University of Cape Town campus, looking frail and exhausted. Two days earlier, Mapaseka was part of a group of students that rushed the gates of parliament, protesting the government’s plan to increase student tuition fees by more than 10 percent next year.

It was one of the biggest student movements to emerge in South Africa since the fall of apartheid. When the students rushed in, police responded by firing stun grenades, tear gas and rubber bullets.

“It’s really hard to sleep after you’ve been exposed to stun grenades and tear gas,” Setlhodi says. “That’s why I’m so tired.”

Setlhodi says she knew they were stun grenades because of conversations she’s had with people in her parents’ generation. They had taken part in demonstrations against the apartheid government in 1976, when police fired on student protestors. She says parents are sharing information on Twitter and the texting application WhatsApp on how to avoid tear gas.

“Imagine your own mother giving you advice like, ‘OK, when that sound goes off, just cover your mouth and nose.’ ”

At 23, Setlhodi is part of the post-apartheid generation — the “born frees.” She doesn’t remember white-minority rule, but she’s no stranger to the poverty that still keeps back millions of black South Africans.

“Your parents tell you what it was like voting for the first time. They were so happy because they were convinced things were going to get better for South Africa,” she says. “I feel like the promises that were made then are not being met by the ruling party.”

Setlhodi says the government hasn’t delivered on promises to provide a better life for all South Africans, black and white; nor has it provided universal access to quality education, housing and jobs.

Where Setlhodi is from, most young people are unemployed.  She grew up in a town on the Botswana border called Taung — “It means Place of the Lion,” she says.

When she was 10, her parents scraped together enough money to send her to a good school in another part of the country.

“To be honest, I was so young then; I felt like ‘my parents don’t love me. Why are you sending me so far away?’ But then I realized they had my best interests at heart.”

Setlhodi says she worked her butt off.  And eventually, she won a scholarship to the top-ranked University of Cape Town.

This year, though, her final year, her scholarship money dried up after she had already registered for classes. Now she owes the university 35,000 rand (about $2,500). The university won’t let her have her transcript and won’t let her graduate until she pays..

So Setlhodi has a very personal reason for joining the students’ #FeesMustFall movement.

Back in 2007, the South African government promised to provide free education for the poor. But that promise hasn’t materialized. The ANC-led government says it’s facing massive budget deficits and can’t afford it.

Setlhodi rolls her eyes at that. She does a quick Google search on her phone and starts reading me headlines: “President Zuma funnels millions of taxpayer dollars to pay for improvement to his private home.”

“So how can you say there’s not enough money?” Mapaseka demands. “I am not buying that.”

At the end of last week, as the protests expanded across the country, Zuma called off the plan to hike tuition fees for the coming year. It’s a victory for the students, but it doesn’t really help Setlhodi. She still owes the university money.

An hour later, he texted her and told her that he is crowdsourcing the funds to pay back her college debt. He told her, “I believe in you and I believe in empowering people.”

Setlhodi says he’s helping her out in part because he was once in the same situation: “And somebody believed in him. They saw his potential.”

Now, Setlhodi and her friends hope the government sees their potential and comes through on its promises.