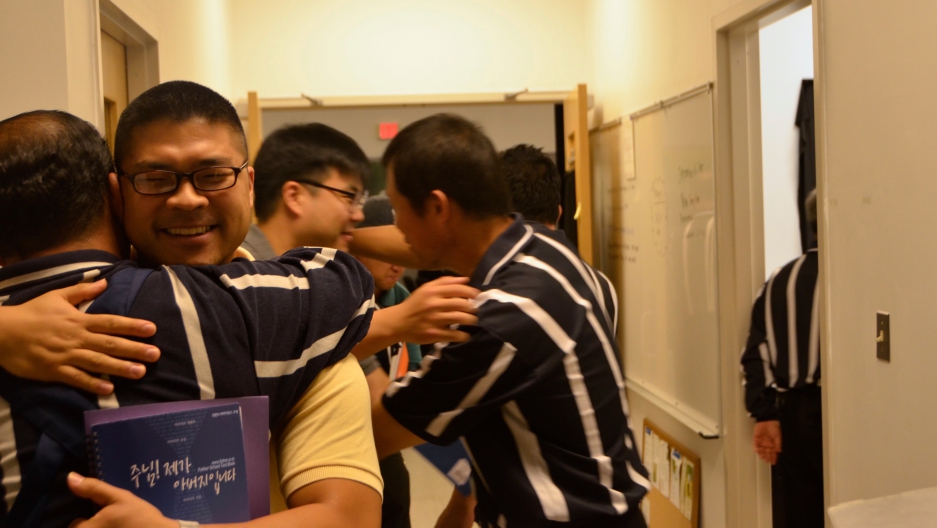 The Duranno Father School teaches stoic Korean dads how to be more involved and loving parents.  The program includes a literal lesson on how to hug.

Courtesy of the Duranno Father School

“I’m not into the habit of hugging,” says Jason Chang, age 47. “Being a Korean guy, when I was growing up, my father and mother, we didn’t really hug.”

Chang is a student at the Duranno Father School in Centreville, Virginia — home to a growing Korean community. The Father School is a four-day retreat of sorts, designed to transform stoic Korean dads into more loving and involved parents. The oldest student is in his 70s, the youngest is just 27, and almost all have something in common — their wives made them come.

“She basically signed up and said, this is the start date. Go ahead and go,” Chang confesses. “But I’m glad I did it. They had homework, you know, that I normally wouldn’t do. It gave me some insights." 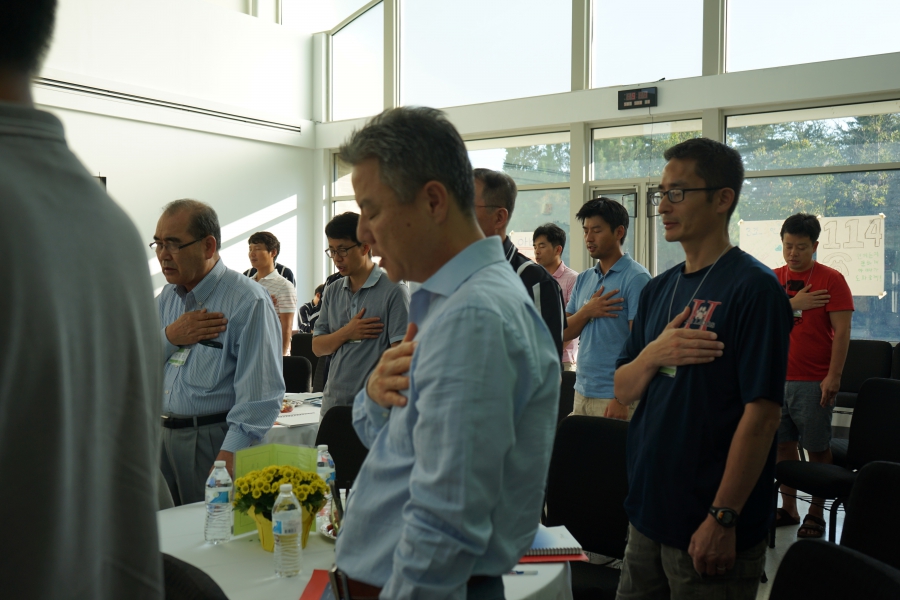 Students are asked to reflect on their experiences with their own fathers -- and what they're like as dads themselves.

We’re in a church fellowship hall, where a live band plays modern Christian hymns, and the men sing along, followed by lectures and activities, including a lesson literally on how to hug. One arm here, bring the other person close, and no patting on the back. Then there are small group discussions that resemble both group therapy and a locker room huddle.

A volunteer in his 40s talks to a younger man in his 20s. “Do you think your father loved you?” he asks. The younger man pauses, and the older one answers for him. “Yes he did.  He just didn’t know how to communicate it.”

The Duranno Father School was started by a church in Seoul in the 1990s, as a response to an epidemic of absentee fathers in South Korea. Korean men work some of the longest hours in the developed world, Confucian values praised them for not expressing their emotions, and for some, it was the norm to physically discipline their kids.

By the third day, a few students have already dropped out. But those who remain are surprisingly honest in their sharing. Most say they’ve been disappointed by their own fathers, one worries about his teenage son, and another confesses he doesn’t see much of his grown children. A few admit with chagrin that they’ve turned out to be a lot like their own dads. 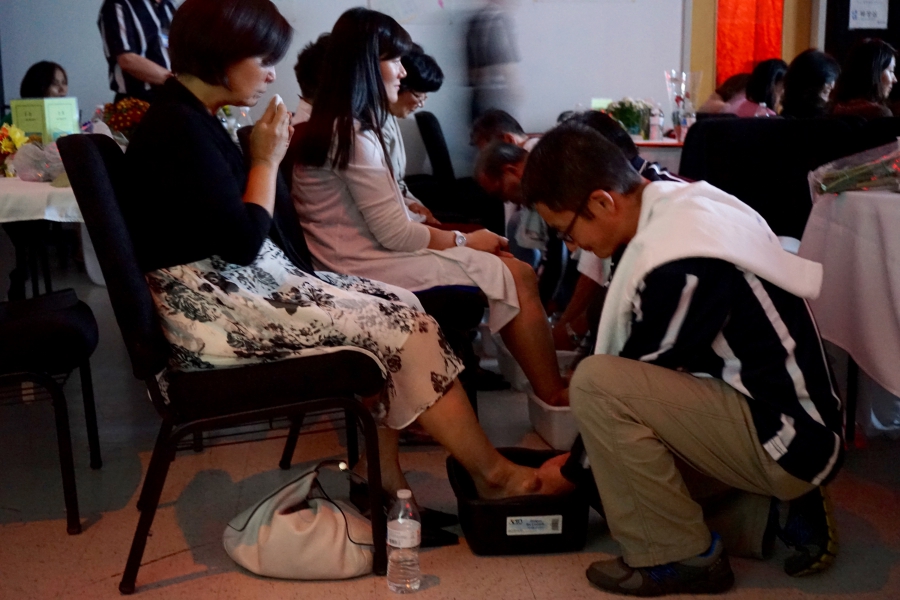 At the Father School graduation, men wash their wives' feet, just as Jesus washed the feet of his disciples in the Bible.

And the school’s not just about being a better dad. The men are assigned homework, like writing letters to their wives, and sharing a list of 20 reasons why you love her. Give her the kind of the attention you did while you were dating, the instructor urges.
Translations

One of the men shares the heartfelt letter he’s written to his wife. Since coming to the US four years ago, he admits life has been harder than he expected. “Living in a small apartment with children, unable to speak the language or find work,” he says, “we grew tired, and said more hurtful words than we intended.”

As it turns out, parenting is hard, and the stresses of immigrant life only make it harder. So a version of the Duranno Father School launched in the US in the early 2000s. A Korean version meets the needs of more recent immigrants, while an English language school serves the next generation. Over the years, the school has expanded to more than 40 countries around the world, with more than 300,000 graduates.

In fact, the school is staffed entirely by graduates. The older men say they don’t want to see younger dads repeat their mistakes. They don aprons and serve up coffee, as they share their own stories during breaks. Frankly, they say it’s easy to revert to their old selves in a matter of months, but in coming back to volunteer, there’s a community that keeps them accountable, says alum Dave Lee.

“Even though I fall back on it sometimes,” he says, “through this school, it made me closer to my family — my wife and my children. I’m able to reflect back on things I’ve done wrong, or could have been done differently." 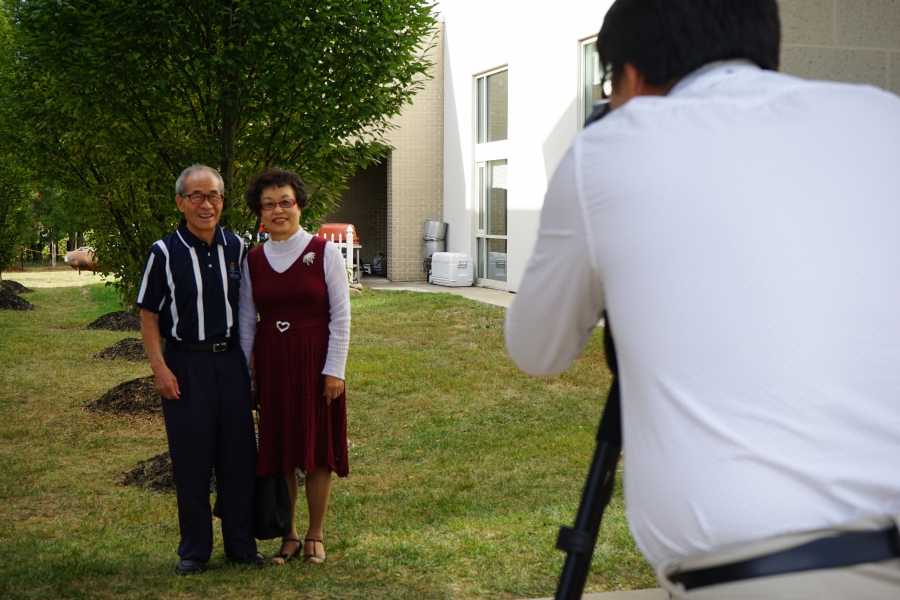 A couple poses for their graduation photo at the Duranno Father School.

Families are invited to join the fathers for their graduation ceremony. The men change into the school’s signature referee striped shirts, as a symbol of their transformation. At the close of the night, the men file in with towels over their shoulders. They kneel before their wives and wash their feet gently, just as Jesus washed his disciples’ feet in the Bible. Women lean forward in their chairs, dabbing their eyes with tissues.

I meet a woman in her 50s, as she links arms with her husband and waits in line for their graduation photos. She’s holding flowers and eager to talk about the changes she sees in her husband. “You know, Korean men, they enjoy drinking.” She says her husband has agreed to drink less, and she’s thrilled. “I’m so happy to hear about this. Yes very, very happy.”

Fathers put their arms around their children, and smile for the camera — their wives look relieved and hopeful. Meanwhile staff are already circulating, recruiting new graduates to join their ranks as Father School volunteers.