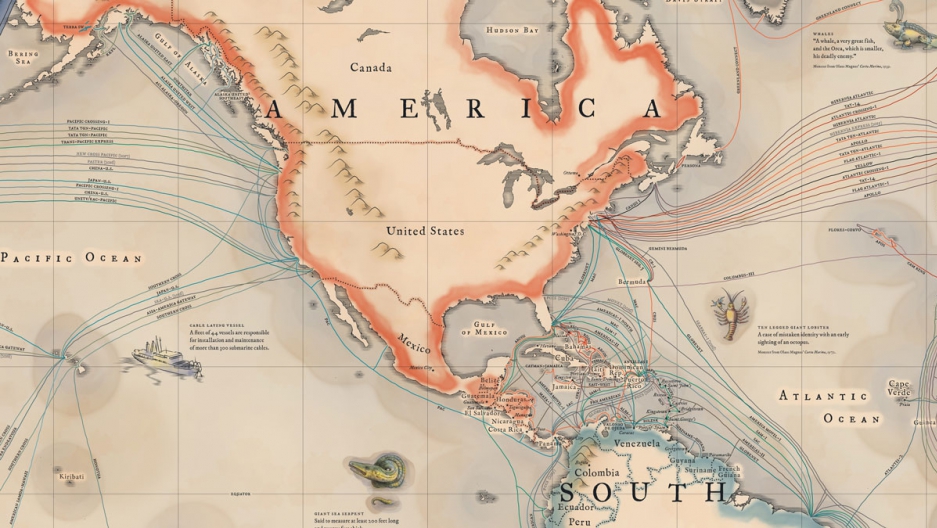 A portion of “A new map of the submarine cables connecting the world in 2015.” Reprinted with permission of TeleGeography .

Undersea fiber optic cables are the arteries of the Internet. A story in the New York Times this week has started a conversation about the vulnerability of these cables and consequently, the Internet itself.

The Times reported that the Pentagon is increasingly concerned about Russian naval activity in proximity to key cables. The suggestion is that the Web could be crippled by Russian attack in the event of a confrontation with the West.

“We depend pretty extensively on these cables,” says Jon Hjembo. “In fact, pretty much everything that we do, all of our communications, eventually traverses fiber optic cables at some point. We talk a lot about the cloud, for example, but really the cloud is under the ocean, it’s under the ground. It’s not something nebulous in the sky. Even our wireless communications — the wireless connection is really a connection between your phone and a base station. From there it traverses fiber optic cables.”

There are about 300 undersea cables around the world, and they’re only about the width of a garden hose. So they are often broken by anchor cables, trawlers, and undersea disasters like earthquakes and landslides. Even shark bites. Many of the cables converge on certain hubs — like New York, Miami and Los Angeles — making these nodes especially vulnerable.

“There are at least 100 breaks on these systems every year,” says Hjembo. “But the beauty of networks is that there is a lot of built-in redundancy. So usually when a break occurs, we don’t even feel it.”

So any deliberate hostile attempt to sabotage the cable network would have to be pretty widespread to overwhelm all that built-in redundancy. “It would have to be a concerted attack on multiple systems at the same time,” says Hjembo.

That makes Hjembo skeptical about the probability of such a move. “If we saw any kind of movement towards multiple systems at the same time, I’m sure that an interception would occur before anything were to happen.”

He also points out that an attack on the Internet would in some ways be self-defeating, since the attacker would also suffer from the resultant chaos.