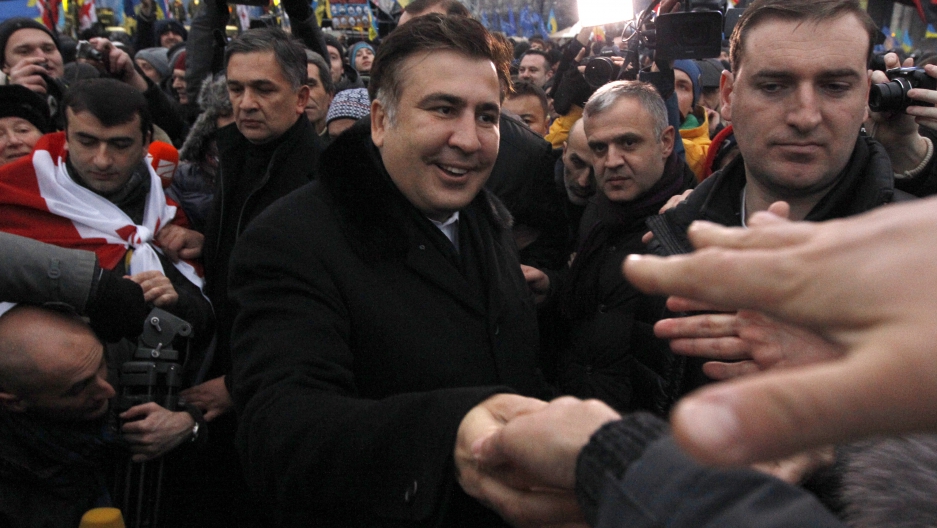 Politically speaking, you might say the governor of Odessa is caught between a rock and a hard place.

He's caught up in the hostility that exists between Ukraine and Russia, and he’s battling within a political environment that’s long been undermined by corruption. At the same time, Mikheil Saakashvili — the former president of Georgia and now governor of Odessa, Ukraine — may be uniquely qualified to deal with it.

“The reason he has been very welcome there and that he ranks today as the most popular politician in Ukraine is because he promised to retard corruption and corruption today is Ukraine's biggest war,” says journalist Natalia Antelava. She’s written a profile of Mikheil Saakashvili in the Guardian newspaper as he mounts his two-fisted fight against Russian expansionism and Ukrainian corruption.

“All of Ukraine’s troubles go back to the fact that this is a country that has absolutely failed to develop a mature political class that doesn’t rob from its future. Saakashvili is probably the only man in the former Soviet Union who has a track record of successful reforms, and it’s solid. He did transform Georgia from a Mafioso, corrupt, failing state into one of the beacons of hope in the post-Soviet space, a country where it’s easy to do business, that’s open, with a growing economy. This is why Ukrainians wanted him to come, and these are the reforms that he’s promising to repeat in Odessa.”

If you read one piece on Saakashvili in Odessa, make it @antelava's detailed long read: https://t.co/6xlx1gdDo2

Saakashvili’s energetic personality itself may help drive his agenda of reforms. He’s known for last minute, eccentric decisions, and his sometimes sleepless schedule has earned him the nickname the Energizer Bunny.

“Even the moments when he seems to be relaxing, it feels like he's about to jump up and do something else,” says Antelava. “He's also very much a man who gets stuff done, and for someone who comes across as someone who doesn't have much of an attention span. I think that’s quite misleading. He has a great attention to details, and an amazing, sponge-like memory. He remembers names and details — that's one of the reasons why the people he meets on the street love him. He charms people, and that’s part of his popularity and success.”

Success is not a forgone conclusion for Saakashvili. He’s only six months into carrying out his agenda of reforms, and the conflict in eastern Ukraine between Ukrainian government forces and Russian-backed separatists is far from over.

“I think many people see this experiment as Ukraine’s real chance, because it’s an experiment that can either succeed and spread to the rest of Ukraine — turning it into a functional country with a normal economy that's attractive to investors and that simply works. Or it fails, and then Ukrainians really don't have much else or many other politicians that they can count on.”

“Reforming a country with an entrenched elite is no easy task. Under these conditions, even basic things – such as transport – become challenges. Saakashvili often goes to Kiev to meet President Poroshenko, and to lobby the government on legislative changes. The problem for him is that most of the flights out of Odessa are run by Ukraine International Airlines, a company owned by Ihor Kolomoisky, a tycoon and former governor of Dnipropetrovsk region. Earlier this year, Poroshenko, who had promised to curb the influence of oligarchs, dismissed Kolomoisky from his position as governor. He also sacked Kolomoisky’s close associate, Igor Palitsa, who was governor of Odessa, replacing him with Saakashvili. Saakashvili has accused Kolomoisky of running a smuggling business at Odessa’s ports (Kolomoisky denies this, and has threatened to sue), and announced he would no longer fly on Kolomoisky’s airline. But the boycott left Saakashvili with virtually no flights out of Odessa. To get to Kiev he now has to make a five-hour journey by car along Ukraine’s bumpy roads.”