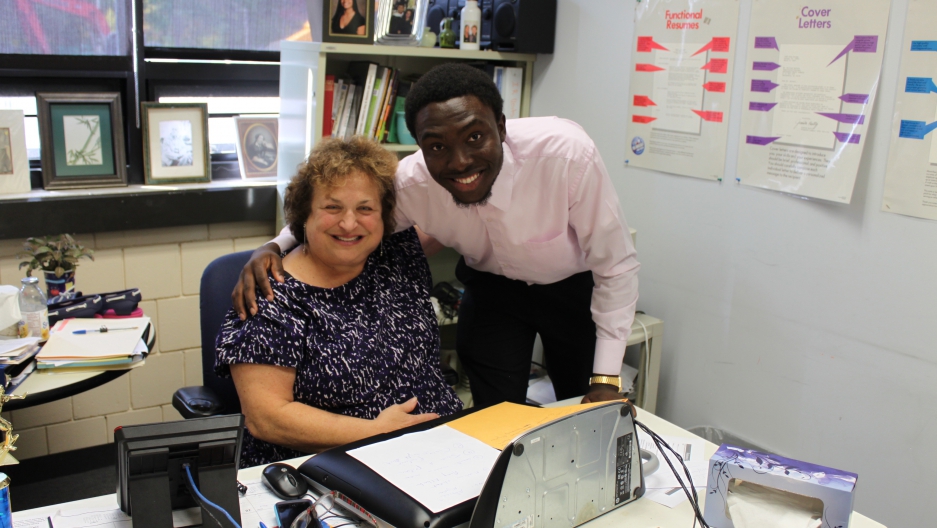 Tauqeer Hassan should have been starting college in Pakistan this fall, but his life was upended over the summer. His family’s longstanding application for US residency was suddenly approved. His parents wanted to move quickly, so, within a matter of weeks, he found himself living in Amherst, Massachusetts, in need of a new plan.

“I had just finished high school and I didn’t want to waste my time,” Hassan said. “I found out through the Internet you could go to community college.”

So he enrolled at nearby Holyoke Community College and embarked on an associate’s degree in business administration. Just like that.

“At first I thought it would be just a semester and then I would transfer, but my advisor says it’s better to go through two whole years and then transfer.”

About a quarter of the students at community colleges nationwide come from immigrant backgrounds. They come in all sorts of ways, for all sorts of reasons, but the common denominator is access.

“The mission of access is so central to what we do that it is extended in a very seamless way to the immigrant population, who already face so many hurdles,” said Yanina Vargas-Arriaga, vice president for student affairs at Holyoke. 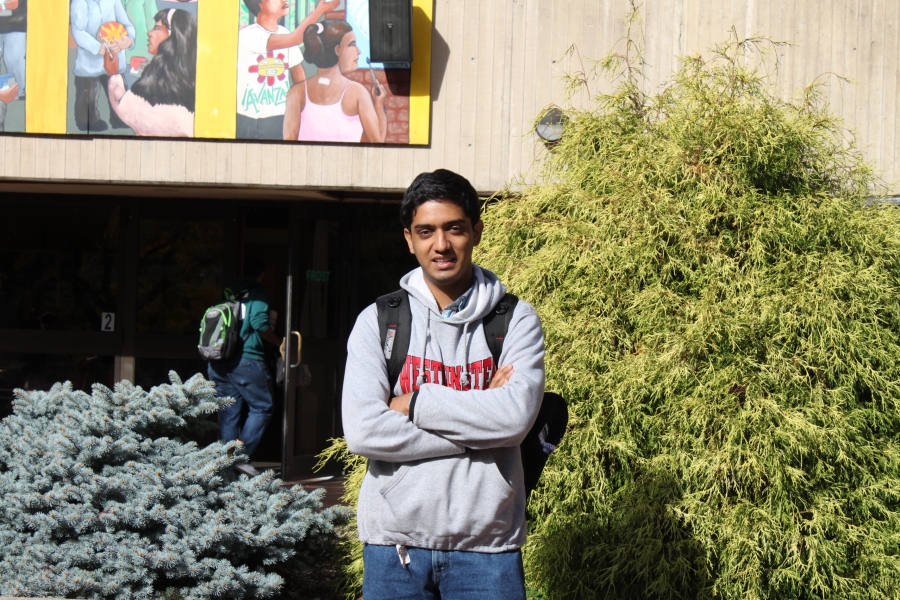 Lawrence Nfor moved to central Massachusetts from Cameroon six years ago, after winning the green card lottery. He was discouraged that his Cameroonian college degree and his experience as an accountant didn’t count for much here in the US. But then he heard about Mount Wachusett Community College in Gardner.

“One of the members in my church told us, ‘You know, this could be a way to get back to school and get some education,’” Nfor said. “Prove to them you know something.”

So Nfor quit his job working third shift in a factory and went back to school to pursue an associate’s degree in business administration. That led to an accounting job at the college. He’s now pursuing a bachelor’s degree at UMass Amherst.

“It was an opportunity I couldn’t resist,” Nfor said. “I might go as far as a Ph.D.”

His wife went back to school too, enrolling in the dental hygiene program at Mount Wachusett. With four kids between the ages of 7 and 12, their days and nights are full.

On a recent Friday, a group of students crammed into Ina Resnikoff’s office at North Shore Community College in Lynn, Massachusetts. Resnikoff is an academic advisor and learning specialist in the TRiO Student Support Services program. TRiO is federally funded and, among other things, caters to first generation immigrants.

“We act like your parents,” Resnikoff told them. “We walk you through the college process so you don’t have to struggle so much to get started.”

Her office is a bright, cluttered place where the students clearly feel at home. They banter with her and she teases them. She’s gathered them so they can tell me their stories.

“Honey we’ve had so much fun waiting,” she said. “Look at my characters. All right guys, lose the gum.”

The “guys” are Osarumwense Agbonsalo and Fissehana Gebreyesus. Their nicknames are Sheddy and Fish. Agbonsalo moved from Nigeria almost four years ago, and Gebreyesus came from Kenya six years ago. They went to rival high schools in Lynn and now play soccer together.

Agbonsalo’s parents didn’t want him to go to North Shore.

“They thought bad gangs come here,” he said. “People who do drugs come here. But at the end of the day it was a whole different story. North Shore is my family.”

His parents wanted him to go to a four-year college, but his high school guidance counselor scared him off.

“She said if I went to the other colleges, I would be in debt for the rest of my life,” Agbonsalo said.

Gebreyesus didn’t want big debts either. He also needed to be close to home to look after his younger brother and two sisters.

“I have to get them from the YMCA and from school to make sure they’re home safely,” Gebreyesus said. “That’s my responsibility.” 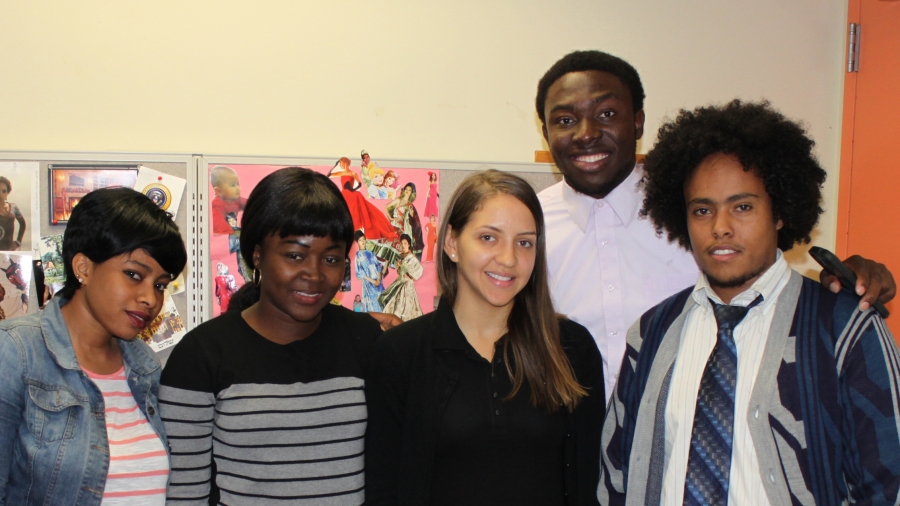 Daybelis De La Rosa is also in the TRiO program. She came to the US from the Dominican Republic when she was 7. She and her mother and little sister settled in Lynn too. North Shore was an obvious choice after she graduated from high school.

“I chose to come to North Shore, because financially it was convenient for me,” De La Rosa said.  “And it’s close to home, considering I need somewhere to go that’s not too far; my mom is dealing with some medical issues right now and I’m sort of the parent, the older sister, the one who’s working, the student. As soon as I’m done with school, I have to rush and pick up my little sister at school or I need to go bring a prescription to my mom. North Shore was the only choice.”

De La Rosa is 22 now. She’s in her final semester at North Shore, juggling her coursework for an associate’s degree in criminal justice with a full time job waitressing at a local restaurant. She squeezes her hours in by working double shifts all weekend.

In some ways, her life is no different from that of students who don’t come from immigrant families. Many of them also have grueling schedules trying to balance work and school. But many immigrant students have additional family obligations their non-immigrant peers do not.

“I have friends that have been here for generations and generations — and they’re more about themselves,” De La Rosa said. “They’re focused on themselves and doing what’s best for them. Whereas, in my culture, if your mom’s not working or your mom is dealing with issues, you have to provide, you have to step forward and do the job.”

As the family driver, translator, caretaker and breadwinner, it’s no wonder De La Rosa sometimes thinks about quitting her studies. But when she wavers, her campus advisors urge her to keep going.

“I feel like North Shore Community College just engages with their students and provides so much support and help,” De La Rosa said.

She’s lucky to be part of the TRiO program.

“It’s not remedial,” Resnikoff said. “It’s a program to give you extra support to get through college as well as you can. It’s a holistic approach. You’re not just a number or a student; we’re a learning community.”

It feels like a community. The TRiO students I meet seem to be thriving. But not all students, let alone all immigrant students, are eligible for special programs like TRiO that look out for them so closely. Educators say many more students would do better, and stay in school longer, if they had similar “wraparound” services. And it’s an issue because community colleges have notoriously low completion rates.

“There’s no mystery about what works,” said Vargas-Arriaga of Holyoke. “We know what works. What works is connection. Treat students as individuals. Be mindful of their subjective reality. We have good structures in place, but they have to be larger and more robust. But we don’t have the funding, often, to scale up those strategies that we know are exactly the answer.”

Scholars of immigration and education say that kind of intense support for individual students will be even more important in the years ahead, as sweeping demographic changes take hold in the US.

“For immigrant youth, if they’re going to college, the vast majority are going to head towards community college,” said Marcelo Suárez-Orozco, Wasserman Dean of the Graduate School of Education and Information Studies at UCLA.

“Today, the challenge for community colleges is to connect with, step up, to serve large numbers of youth coming into our country looking for the pathway that will enable them to succeed in our increasingly competitive economy and society of the 21st century.”

Daybelis De La Rosa has found her pathway. She plans to become an immigration lawyer, and help others find their way to a stable new life in America.

This story is part of a series on community colleges, "College Material." You can find the entire series here.