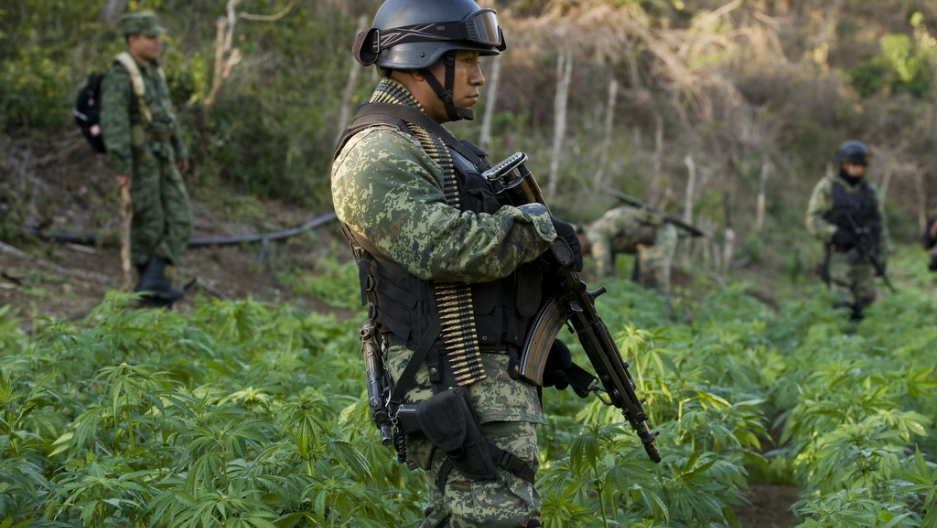 GUADALAJARA, Mexico — Mexico took an important step Wednesday toward legalizing marijuana: The Supreme Court ruled in favor of four plaintiffs' right to produce and use cannabis.

It's not full-on legalization. Mexico still prohibits pot, except it allows personal possession of 5 grams (0.18 ounces) or under.

But the high court's vote could influence other rulings and lead the way to rewriting marijuana policy in a nation that's a huge supplier for the United States.

And while some advocates say legalization would pull some control of cannabis away from powerful narco cartels and protect Mexicans who choose to use it, others say legalizing pot isn't so much about safety as it is about personal liberty.

The court ruling came in response to an appeal filed by the Mexican Association for Responsible Self-Consumption and Tolerance, a marijuana advocacy group, after the health regulator rejected its request for permission to grow weed for recreational purposes.

“We’re arguing that the government is infringing on the constitutional doctrine of the free development of personality,” Andres Aguinaco, a lawyer representing the group, told Fusion.

It still requires legislation reform, but the word of the Supreme Court carries “an important weight” in the battle, El Pais reported.

There is precedent in the Americas.

Uruguay passed laws in 2013 enabling the government to regulate the production and sale of marijuana, and Chilean lawmakers are currently debating legislation that would decriminalize marijuana for medical and recreational purposes. Several US states have also relaxed their marijuana laws.

The push to legalize weed in Mexico has gathered steam in recent months after the federal government, which opposes legalization, agreed to allow an 8-year-old girl suffering from a debilitating form of epilepsy to use a marijuana-based medicine to treat her condition.

It was the first time a Mexican citizen has been allowed to use medical marijuana, and it came about after a federal judge ruled the girl’s parents could import the drug.

It was a huge decision in a country that has been ravaged by drug-related violence in the past decade. Tens of thousands of people have died or disappeared during the government-backed war on drug cartels.

But legalizing marijuana in Mexico alone won't drive cartels out of business.

Marijuana is just one of the drugs that organized criminal gangs in Mexico produce and sell, and the domestic market is nowhere near as important as the United States. Only 1.2 percent of Mexicans are estimated to use the drug, compared with 12.6 percent in the United States, and, although it's hard to say for sure, as much as two-thirds of marijuana in the United States could be coming from Mexico. Drug cartels also diverse funding, deriving significant earnings from kidnapping, extortion, and stealing minerals.

Legalizing marijuana won't end the drug war, but pro-legalization activists say it could make life safer for Mexicans who choose to use the drug. Allowing people to grow and consume their own weed would reduce their exposure to criminal gangs and corrupt police, they said.

“We want to take the control of illegal drugs out of the hands of criminal gangs and put it in the hands of society,” said Ricardo Sala, executive director of the Collective for a Comprehensive Policy Toward Drugs, a civil society organization based in Mexico City.

Legalization would give users a “legal and regulated route to access marijuana and permit those people to obtain this drug in a more secure way,” Sala said.

For some advocates of legalization, though, the issue isn't primarily about safety — it's about liberty.

Leopoldo Rivera Rivera, the director of the Mexican Association of Cannabis Studies, told GlobalPost legalization would recognize that pot smokers have the same rights as everyone else.

Mexico's courts have made historic rulings favoring progressive issues in the past. The court ruled in June that laws prohibiting gay marriage were unconstitutional, putting pressure on states to change their legislation to allow same-sex couples to tie the knot.