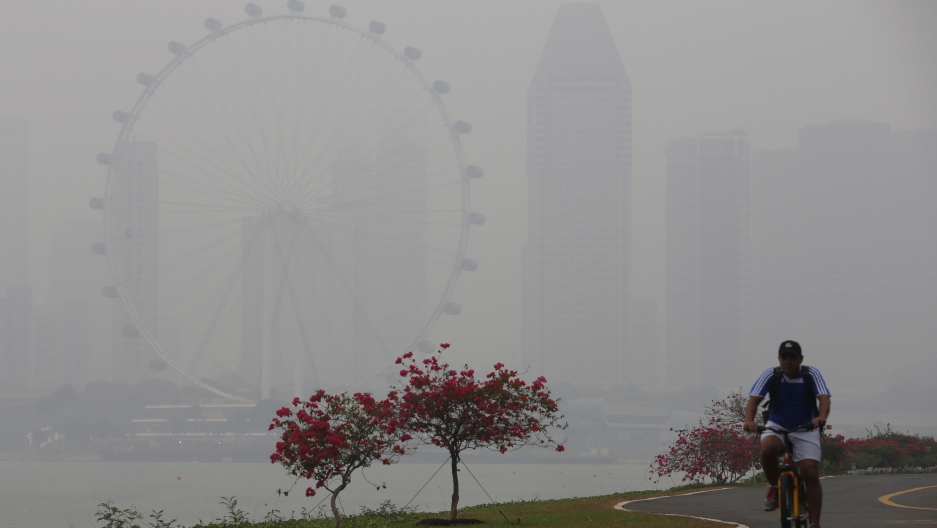 A man rides his bicycle past the Singapore Flyer observatory wheel, shrouded by haze in Singapore.

Indonesian President Joko Widodo is cutting short his visit to the US to deal with a growing environmental crisis back home.

Wildfires across the length of his country over the last few months have thrown up huge clouds of smoke that now hang over much of southeast Asia, from Malaysia and Singapore, across Indonesia, to Papua New Guinea.

“It’s hard for people to imagine how serious this is,” says Nigel Sizer, forests director for the World Resources Institute, an environmental research group in Washington. Sizer was in Indonesia for the summer and is heading back next week.

“This is literally almost off the charts in terms of air quality,” adds Sizer. “It’s like you’re staring through thick bonfire smoke day after day. ... It’s an extraordinary situation.”

Smoke and haze are an annual problem in this part of the world at this time of year. But it’s been made much worse because it’s an El Niño year. So conditions are much drier than normal. But the problems are deeper than that.

“What you’ve got here is a history in these areas of poor management of the land,” explains Sizer. “A lot of these areas were grabbed by big palm oil and pulp and paper companies 20 to 30 years ago, under the authoritarian regime of President Suharto. Local communities were kicked off of these areas ... and they probably should never have been developed to start with.”

“A lot of the land is peat, deep peat, which is very rich in organic matter, and produces a tremendous amount of air pollution when it’s burned,” adds Sizer. The peat also retains the heat below ground so that fires can spread under ground and re-emerge elsewhere, making the fires hard to control.

Sizer does note that a lot of the larger companies have made commitments to halt slash and burn activities, and halt all use of fire. But many smaller ones and the many illegal operations are now the source of much of the trouble.

The pollution from the fires is staggering. For the last six weeks, daily carbon emissions from the fires have been equivalent to all the emissions produced daily by Japan or Germany. On the worst days, the emissions are greater than those produced by the entire United States. That’s according to a study produced by Sizer’s World Resources Institute in collaboration with a team of Dutch scientists.

Still, it’s not all grim. Sizer hopes that with more effective leadership from the Indonesian government, coupled with international support, this could be the last year for smoke problems on this scale in southeast Asia.