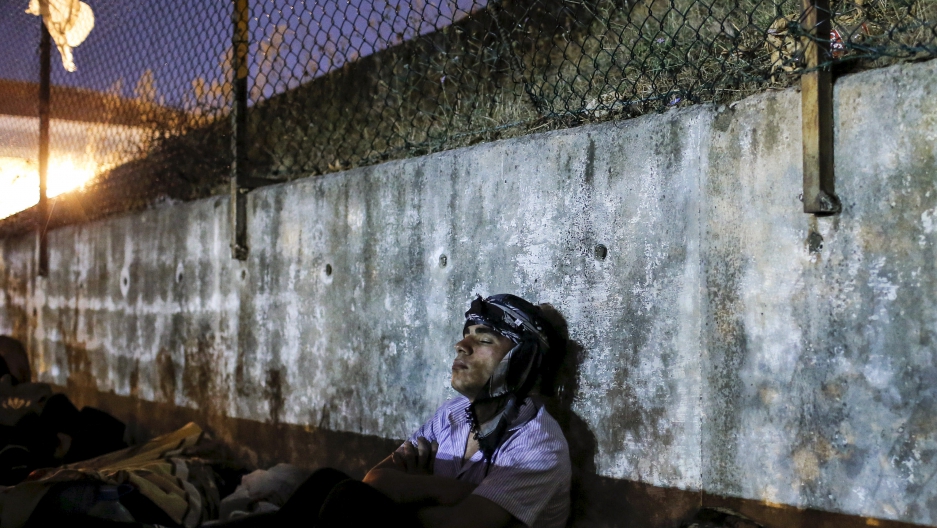 A migrant sleeps near the main bus station in Istanbul, Turkey.

Twenty-six-year-old refugee Nader fled his home in Homs, Syria, more than four years ago. He’s traveled through Egypt and Jordan and finally he landed in Turkey, where he is seeking asylum.

Nader fled from the threat of being killed in the ongoing civil war, but he also left Syria because he feared being targeted for his sexual orientation. And he’s not alone, according to BuzzFeed reporter J. Lester Feder, who was recently in Turkey covering the plight of LGBT refugees there. That is where he heard Nader’s story.

“He had grown up in [Homs] and had been [friends] with a number of people who then went on to join some of the Islamic militias, including some guys he had had sexual encounters with when he was a young teen,” says Feder.

Nader feared that his friends in Islamic militia would turn against him for his sexual orientation.

“He did wind up getting threatened with the potential of being thrown off a building as some of these groups are doing with people they believe to be gay,” says Feder.

Nader didn’t want to talk with Feder in great detail about his feelings toward his friends and ex-lovers in Syria who had changed so dramatically since the war began. However, Feder was able to talk with several other Syrian refugees who encountered a similar transformation of their friends' attitudes toward LGBT people since the start of the war.

“They’ve been really struck by how profoundly the people they were close to were changed by this war,” he says.

Before the civil war began Syria was not a place of Islamic extremism. It was a fairly secular country and tolerance for gays and lesbians was fairly high.

“Among countries in the region, [Syria] was a place where gays and lesbians could have relatively stable lives — as opposed to places like Saudi Arabia or Iran, where the state really seeks people out for arrest,” says Feder.

This stability has been shaken as Islamic militias and radicals have taken over parts of Syria.

“The strongest of the militias were Islamist. A lot of people who hadn’t had that kind of ideology, gravitated towards it because they were fighting for their communities and fighting against an oppressive state. So it was very shocking for a lot of people to see how much people changed in the very short period of time because of the conflict,” says Feder.

But just because Nader and other LGBT refugees have made it to Turkey doesn’t mean their troubles end. Although the UNHCR actually fast-tracks LGBT refugees for resettlement, the process can still take two years or more. During the time refugees can’t legally work, the UNHCR doesn’t provide housing. Many refugees have been assaulted by other refugees and Turks, says Feder. He even spoke with one lesbian woman who, faced with becoming homeless, actually returned to Syria.

“They’re trying to survive, usually working on the black market. A lot of them become sex workers, because that’s the only way to support themselves. And that exposes them to a lot of violence,” says Feder.