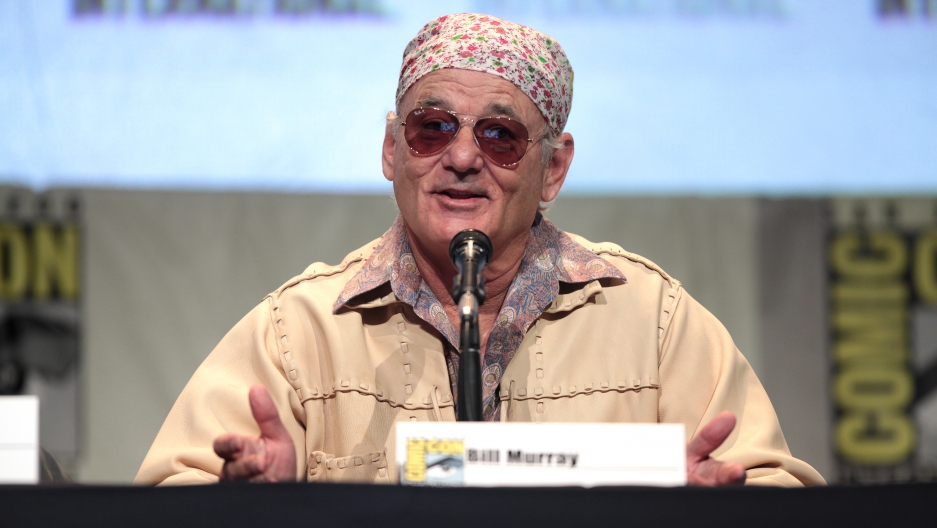 Bill Murray promotes his film Rock the Kasbah, in character at Comic-Con.

The new film “Rock The Kasbah” is like the love child of “Crazy Heart” and “Mad Max.” A comedy about the music business in Afghanistan, the film comes complete with guns, guitars and a girl who ditches her veil for a chance to become a pop star.

In it, Bill Murray stars as Richie Lanz — a has-been rock manager taking his last remaining act on a USO tour of Afghanistan. When his act leaves him high and dry in Kabul, Richie finds himself in desperate straits, until he discovers a young Afghan girl with an extraordinary voice.

Her name is Salima, and she's played by Palestinian actress Leem Lubany. Richie arranges for Salima to compete on Afghanistan's version of "American Idol” — the first woman to do so. If that sounds too far fetched, we assure you, this is partially inspired by reality.

“I read [the script] and fell in love with Salima,” says Lubany. “I felt that she’s such a courageous young girl that has a dream. Her dream is not to be famous — she’s not looking for fame or wealth — she basically wants to let her voice out.”

“Bill Murray is a hilarious human being,” she says. “What you see on set is basically what you see off set. What’s wonderful is the scenes between me and Bill are filled with emotion. Also, Salima is not a comedian part in the film — she brings out Richie Lanz and that emotional side of him. I think that’s something that I really loved about them both and their relationship — what she brings out in him.”

In the film, the American troops are struggling to succeed. When they’re not dodging IEDs, the soldiers try to connect with some of the Afghan people to no avail. Instead, America’s influence is played out in Salima — at last when she performs Cat Stevens songs like “Peace Train.”

“I think I’m bringing both sides together by art, nothing else,” says Lubany. “No violence or all that mess that’s going on there. By singing, I bring two completely different ways of thinking together by letting my voice out, and I think that’s beautiful.”

In the film, Salima is a member of the Pashtun ethnic group, and thus prohibited from singing in public. In doing so, Lubany says the character was empowered.

“For her, she won only by just singing,” says Lubany. “She knew deep down that a lot of people in Afghanistan liked that she was on stage, and that it was a girl singing. She was an inspiration for a lot of young girls who were sitting back there, crying a little bit — you can see that in the movie. I think only by that, she won a lot. It doesn’t matter if she won ‘Afghan Star.’ Just by standing there she won.”