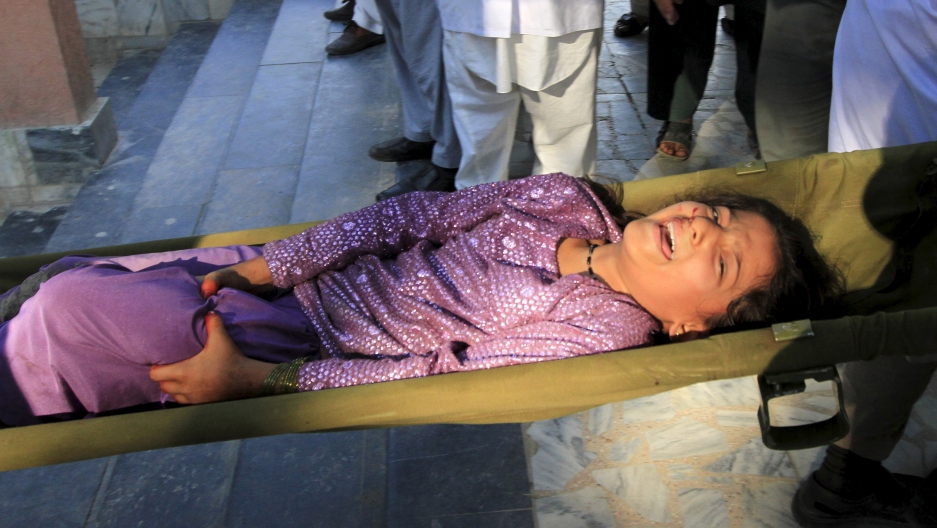 Rescue workers carry a girl who injured in an earthquake to a hospital in Jalalabad, Afghanistan.

Hundreds of people have been killed and injured after a major earthquake struck Afghanistan and Pakistan.

The epicenter was a mountainous district of Afghanistan near the city of Faizabad, and registered magnitude 7.5 on the Richter scale, according to the US Geological Survey.

Afghanistan's Chief Executive Abdullah Abdullah has told news organizations that the earthquake was the worst to strike the country in recent years. In Pakistan, residents of the capital Islamabad described feeling tremors that went on far longer than any other earthquake in recent memory. Talat Hussein, a news anchor for Pakistan’s Saach TV channel was among those affected.

“The earth just shook. [It was] a massive hit. We waited for it to peter out, but it wasn’t going away," he said.

The tremors were also felt in the Indian capital, Delhi, where offices were evacuated and the city metro was halted. In an unusual show of solidarity, India’s Prime Minister Narendra Modi has offered his condolences to Pakistani Prime Minister Nawaz Sharif, and offered assistance with relief efforts.

According to Hussein, about half of Pakistan has been affected in some way, with rural areas particularly hard hit. Nevertheless, the destruction is expected to be less severe than in the Kashmir earthquake of 2005, which killed tens of thousands of people.

Unlike that disaster, the epicenter of today’s quake was deep under the earth's surface, more than 125 miles below ground. The Kashmir earthquake's epicenter was much shallower, at only 16 miles below the surface. This year’s earthquake in Nepal had a depth of less than five miles.