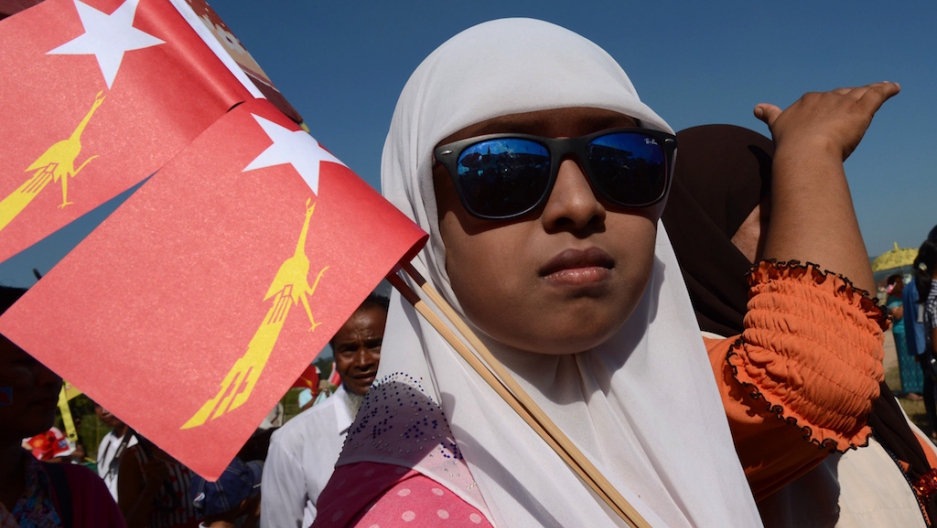 YANGON, Myanmar — With what’s supposed to be the freest vote in decades looming on Nov. 8, Myanmar is awash in election mania.

The energy and buzz are palpable in Yangon, the country’s biggest city, where candidate billboards dot the streets and rallies seem to spring up from nowhere.

In the case of Aung San Suu Kyi’s opposition party, the National League for Democracy (NLD), those rallies include rap.

“All of the hip-hop artists and rappers stand on the side of Aung San Suu Kyi,” said Anegga, one of several vocalists who feature on an increasingly popular campaign song released about a month ago.

The song, called "Fighting Peacock NLD" after the party's symbol, was a collaboration. Anegga was first invited into the creative process by a film director.

“Before the idea came out we brainstormed with all the artists,” the rapper said in a phone interview earlier this month, on his way to perform at another rally. “But we want to make our song for the NLD have, like, very booming, banging beats. So we want to take samples from Latin samba music and, like, dance music … and then on one part of the song we want to sing reggae.”

Rappers Anegga, G-Tone and Yan Yan Chan each deliver verses in succession, while the singers Saw Phoe Khwar and She croon at the beginning and end of the song.

“All of the hip-hop artists and rappers stand on the side of Aung San Suu Kyi.”

The finished product is pretty catchy, as political anthems go, but the rhymes get a little lost in translation.

Reggae singer Saw Phoe Khwar sings into the microphone as rapper Anegga (right front) dances along at a performance in downtown Yangon, Oct. 18, 2015.

In Myanmar, it’s not surprising that rappers and reggae artists are getting involved in politics.

Many of the country’s hip-hop artists are deeply concerned with social change, as blogger and translator Kenneth Wong discovered when he was asked to translate lyrics for an MTV special on hip-hop in Myanmar.

“I began watching the raw footage, fully expecting the twenty-something Burmese rappers to mimic their American counterparts,” he wrote on his blog.

“The swagger, bravado, and syncopated beats were certainly familiar. But the surprise was the Burmese lyrics. The mega rap stars in the US I've heard routinely sing of drug-fueled street life, violence, and sex, often celebrating them in a way that makes me cringe. By contrast, Y.A.K., the two-girl rap duo from Burma [Myanmar], was telling women that they ‘weren’t born to obey unjust orders,’ that they should ‘wipe away the notion of the weaker sex.’”

He compares the mainstream embrace of hip-hop in America to the budding and “marginalized subculture" of the genre within Myanmar's pop scene.

“As such, it echoes the underclass's pent-up anger, flaunts its jarring beats at the authorities, and mocks the quasi-civilian government's false pretenses. They are rebels with an earnest cause.”

What does Suu Kyi think of it? The artists have yet to receive feedback, but they are meeting her this weekend and may find out.

Anegga said that in 2012, Suu Kyi told artists that if they wanted to help the country, they should use their musical ability.

“Now we know she is very busy these days so we want to contribute one song for her,” Anegga said. “We wanted to help our leader.”

Joe Freeman is a Yangon-based journalist and an editor at Coconuts Media. Follow him at @joefree215.