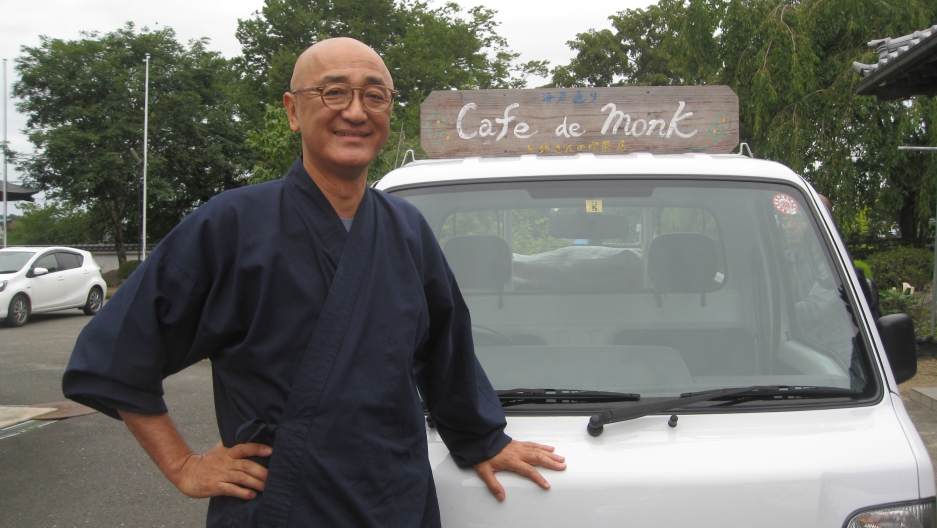 Taio Kaneta with his signature "Cafe de Monk" truck that he uses for his pop-up cafes. As a Buddhist monk, Kaneta wanted to offer something special to those still reeling from the triple disaster of earthquake, tsunami and nuclear meltdown.

When the triple disaster of a tsunami, earthquake and nuclear meltdown struck Japan in March 2011, the lives of hundreds of thousands of people were upended.

Taio Kaneta tells me it’s almost like they went into shock. “People lost their ability to feel, they became emotionless. It’s like their hearts froze to the point where they couldn't even cry.”

Kaneta is a Buddhist monk, and on this day, we’re driving out to one of the temporary housing facilities setup after the disaster. In Japan, Buddhist monks usually do funerals and deal with the bereaved. After the disaster, they and other religious practitioners were overwhelmed — not just by the number of people affected, but by how to attend to so many who’d lost so much.

Kaneta says he started volunteering, giving out food, but he began to think, anyone can do this — what can I do as a Buddhist monk do that others can't?

The solution was not simple, though. Kaneta notes that people in the disaster areas were suffering in different ways. They have different religious backgrounds and values, and most Japanese are secular, almost suspicious of anything that smacks of religion.

So he thought, “You’ve got to improvise, like in jazz. The base of what we do doesn't change. But you’ve got to groove with it.”

Kaneta, who is also a musician, says he wanted to create a place where people’s emotions could start to thaw. That’s how the charismatic monk began traveling around the area, setting up a rotating, pop-up café that he called “Café de Monk.”

The name is meant to be a triple entendre.

For starters, he is a monk. But the word ‘monku’ in Japanese means to complain.

“It’s like, let it out to the monks. We will share your burden,” he says. And in the background he plays Thelonius Monk. 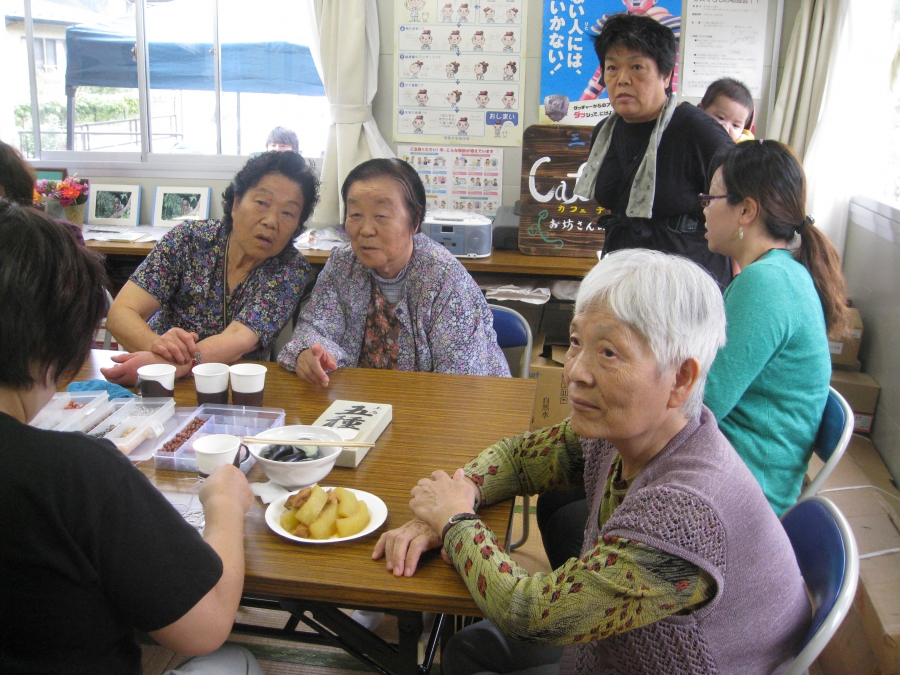 At Cafe de Monk, coffee, cake, and a sympathetic ear.

On this day, Café de Monk has popped up at the Yokoyama temporary housing facility in Miyagi prefecture. Three other young monks join in; sometimes religious practitioners from other faiths come too. It’s casual, but there are a few ground rules.

For one, religion is not really on the table. Kaneta says they aren't there to preach.

“On the contrary, our job is to listen,” he says. “We draw out their suffering, sadness, happiness. Really listen.”

That kind of attention and care to their emotions and their stories is the first step they need to be able to stand on their own two feet again.

Visitors to the café eat cake, drink coffee. There’s art therapy, massages. They bead bracelets — bracelets that are technically Buddhist rosaries, but no one mentions that or seems to care.

In a lot of ways, it seems almost too ordinary — hanging out, drinking coffee. And that is kind of the point. This sense of normality has been lacking in their lives.

Most of the residents in the Yokoyama facility come from Minami-Sanriku, a town on Japan’s east coast that was largely destroyed by the tsunami.

The mountain scenery here is gorgeous, but life in these temporary housing units is not easy. They were never meant to be long-term housing: The units don’t retain heat or cold well; you can hear almost every sound from your neighbor; and people here are in limbo trying to figure out how to move on with their lives.

At the end of the day, Kaneta visits the home of café guest Eiko Oyama to talk and pray at the Buddhist shrine set up for her 2-year-old granddaughter. She passed away from a sudden fever after they came to live here.

Oyama says that sometimes they have other gatherings in the community room, but Café de Monk is completely different.

“When they do Café de Monk, a lot of people come. And we’re able to open our hearts to each other. And the monks, they’re really good at listening.”

Levi McLaughlin, an assistant professor at North Carolina State University who studies Buddhism in Japan, points out that the café doesn’t carry a stigma in the way that therapy or government aid may.

And although it isn’t a religious event, he says the café does “draw upon [the monks’] professional skills as religious practitioners to care for the dead and offer memorials and do other things ... that a therapist wouldn’t be able to do.”

While it weaves in low-key Buddhist themes, McLaughlin says Kaneta and others freely cross boundaries of sects and religions in order to do what’s necessary to help people.

On the drive back to his temple from Yokoyama, I ask Kaneta if he ever gets tired. He’s been hosting these cafés around the region almost every week for the past four years.

He laughs, and says, “Of course I do. But there’s nothing you can really do about it.”

About a year ago he actually wasn't sure he could keep going. But he started going to more hot springs to unwind, and when he has time, he plays his guitar around town — doing jazz or covers of the Beatles.

He tells me he has a recent recording in the back, and when we get back to the temple, he hands me a CD.