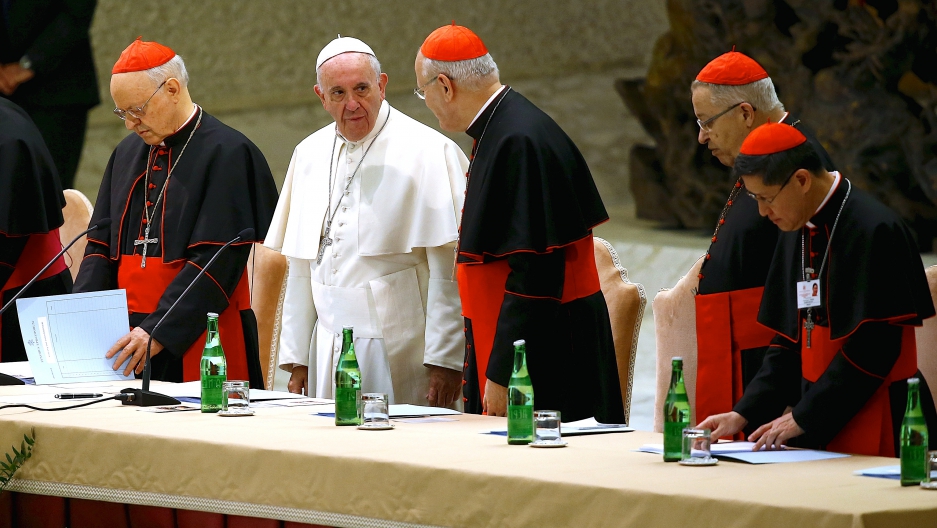 Pope Francis arrives to lead a special audience to mark 50th anniversary of Synod of Bishops in Paul VI hall at the Vatican on October 17, 2015.

They wear the same black cassocks. They preach the same gospel. And they look to the same man as their Holy Father in Rome, Pope Francis. But the 270 Catholic bishops from right across the globe meeting at the Vatican this month are wrestling with some divisive issues.

And foreign language just happens to one of them.

This sort of international Catholic summit has been happening for 50 years. It’s called a Synod of Bishops. The aim is to help the Vatican stay in touch with Church leaders from every corner of the Catholic world.

The bishops are organized into 13 different language groups, English, French, German and so on. They share the same goal: to come up with a single document of their findings to present to Pope Francis by the end of the week. The final version of that document will be written in the lingua franca of the Catholic Church, which is Italian.

Italian has not been the official language for all synod business for very long. Pope Francis brought the change a couple of years ago. In the past, when the bishops gathered for a synod, they produced documents in Latin.

Switching to Italian has not been seamless. Archbishop Charles Chaput of Philadelphia brought up the language issue at the start of this synod meeting in early October.

“One of the difficulties we had, as we looked at the document, was some of the bishops wanted to analyze it word by word. And it isn’t the official document, we have the English translation, which in some ways doesn’t match the Italian,” Chaput told a news conference at the Vatican.

Chaput said there were concerns among some bisohps. “What does this word mean to our people? Can it be misinterpreted? Will it be used against the Church rather than in favor of the Church?”

Chaput was hinting at the problem of accuracy. Not just linguistic, but ideological accuracy. An example of what he’s talking about came about during last year’s synod. There was a minor sensation in the news media over the translation – or mistranslation – of wording related to how the Church views gays and lesbians.

The original Italian version had the heading, “Accogliere le persone omosessuali.” The key word here being accogliere, which is usually translated into English as the verb, “to welcome.” But in the version that the American bishops were given, the verb appeared as, “to provide.”

So in essence, the original Italian document that said the Catholic Church would “welcome” gays and lesbians, contained a substantive change in doctrine. But the English translation did not convey that innovation. The suspicion here was that the business of translation was being manipulated behind the scnes to avoid upsetting conservative English-speaking bishops.

The anxiety about translations has carried over to this year’s synod. One big reason for that has to do with the nature of this synod, says Massimo Faggioli, an expert on Catholic theology at the University of St. Thomas in Minnesota.

Under previous popes, the synods worked very differently, Faggioli explains. The bishops used to gather for the purpose of rubber-stamping Vatican policy. There was no real debate over the true meaning of the official text.

“But now, these texts matter,” Faggioli says. “[The bishops] know that if they vote on one text or another, that might change the direction of the Catholic church on some teachings, which was not something anybody was thinking about under Pope John Paul II or Pope Benedict.”

Pope Francis has said he wants a more decentralized Catholic Church. And he has encouraged the bishops at the synod to speak boldly, even about subjects on which they disagree. Some of the most contentious issues at this synod are about whether or not to allow Communion to people who’ve been divorced and remarried, premarital cohabitation, and how the Church should talk about gays and lesbians.

Not all of the bishops are enthusiastic about the wisdom of a truly open debate. Faggioli says that includes some conservative American bishops, who also don’t have the best Italian language skills.

“The language issue is just one way for them to express their lack of confidence in this idea that debate is healthy. Many of them don’t think that issues should be debated too much, because that might lead to changes they don’t believe in.”

For his part, Archbishop Chaput says the perception of deep ideological divisions between bishops is way overblown.

In any case, Faggioli says it makes sense for Italian to be the official language of the Catholic Church. Unlike Latin, Italian is a living language of the real world. English is already the default language for international business and finance. In much of the world, English is a symbol of the Western world and superpower America.

“Italian is more politically neutral,” Faggioli says, and therefore it is a lot more acceptable to people from poorer countries.

And besides, the Vatican is still located in Rome.