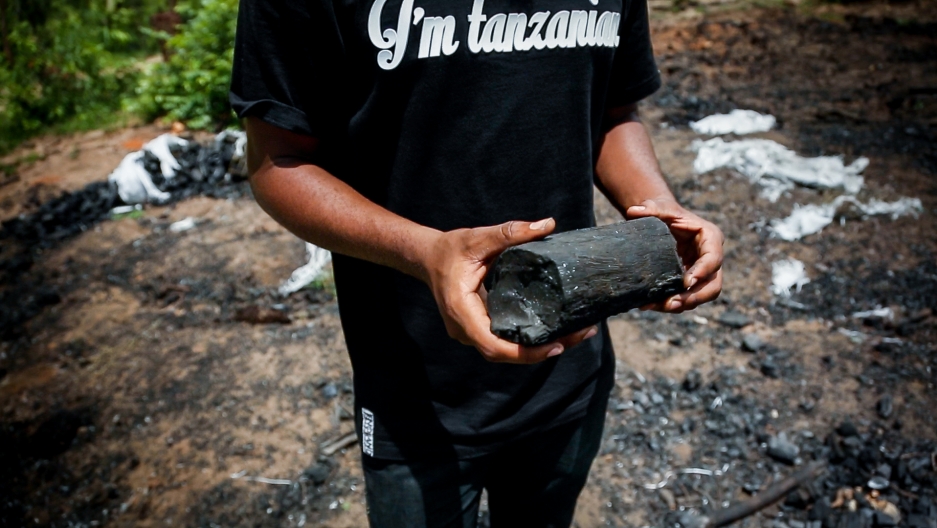 Some 95 percent of urban Tanzanians use charcoal for cooking fuel, and the trade supports more than a million jobs. But charcoal production is taking a massive toll on the country's forests. After a failed attempt to ban the trade the country is now trying to build an infrastructure for sustainable production.

Rashidy Kazeuka says a forest cleared for charcoal is a silent and desolate place. No birds or other wildlife, just a barren, dried out landscape.

It’s something Kazeuka knows well. He’s a charcoal producer himself, in central Tanzania’s Kilosa district, and in the past he says he never paid attention to things like wildlife or watersheds. He just went into the forest and cut every tree he could find, no matter the size. 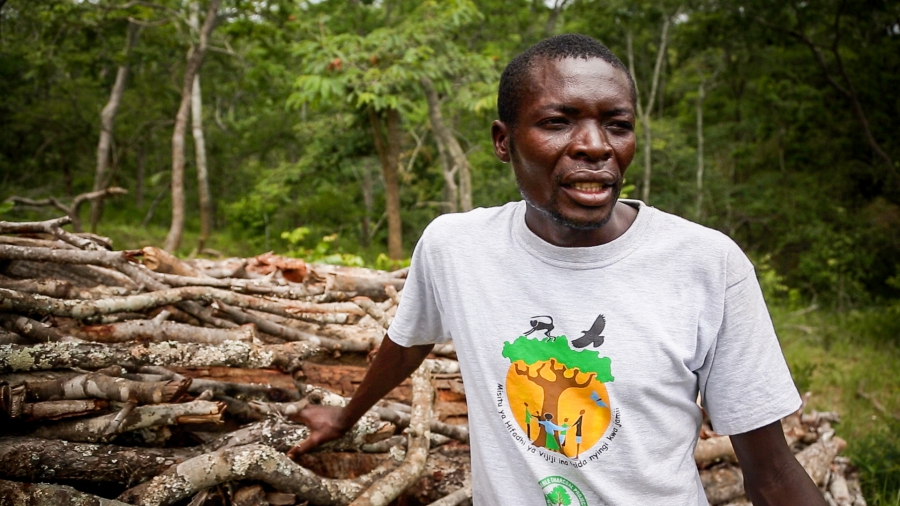 35-year-old Rashidy Kazeuka used to produce charcoal illegally, cutting every tree he could with no concern for things like wildlife or watersheds. Under Tanzania's new pilot program he's now producing more sustainable charcoal on designated land, and paying fees that support local services. Kazeuka says he's also making more money and his family respects him because his children will now be able to carry on the tradition.

These days, Kazeuka still produces charcoal in a traditional kiln — piling chunks of earth around a stick frame covering the wood.  But everything else about what he does is different. He is part of a new sustainable charcoal pilot project aimed at helping rural producers make and sell charcoal in a way that doesn’t decimate Tanzania’s forests.

Deforestation is rampant here, and the charcoal market is a big reason why. About 95 percent of urban households in this rapidly urbanizing country use it as their primary fuel.

A day’s drive from Kilosa, the charcoal markets of Dar es Salaam offer a vivid example of that growing demand. On a dusty side street 24-year-old Goddi Mbisa runs a brisk trade.

It’s a good business, Mbisa says, because rain or shine he sells charcoal, all the time making money. Hundreds of bags, each the size of a man, are stacked around him on ground turned black from the dust.

By some estimates, Dar es Salaam burns through more than 35,000 of these bags every day, a number that’s rising fast as the city’s population swells.

Mbisa says on a good day he sells 60 or 70 bags, making a dollar from each one, a tiny sliver of this $650 million a year industry here. Charcoal in Tanzania is bigger than coffee and tea combined, and its vast supply chain rivals even Coca Cola’s.

With one critical difference.

It's completely unregulated and untaxed, and along with its impact on the country’s forests, a recent World Bank report estimated that the government is losing about $100 million a year in uncollected revenue.

But the government has been confounded in its efforts to shut it down.

Millions depend on charcoal for cooking fuel, and the trade also supports more than a million jobs.

“If you really cut down the production, all of these people (would lose their) livelihoods,” Ng’atigwa says. “And that would be chaos.” 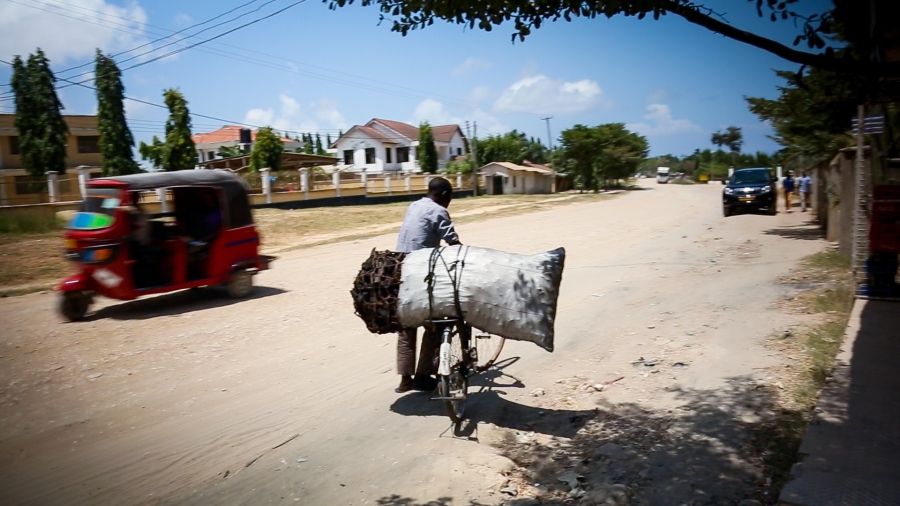 Charcoal is the main cooking fuel for 95% of the residents of Tanzania's fast-growing cities, putting a huge strain the country's forests. It's often sold in bags as big as a person, and then transported by any means available, like this bicycle in Dar es Salaam.

Chaos was exactly what happened back in 2006 when the government tried to ban the charcoal trade. The effort backfired when prices spiked and bolstered the illegal trade rather than curbing it, and was abandoned after just two weeks.

Which brings us back to Kilosa, and the government’s new approach.

It’s focused on village-owned forests, which account for nearly half of Tanzania’s remaining woodlands and have been a huge source for black market charcoal.

In Kilosa, about a square mile of forest is now reserved for charcoal production, roughly a tenth of the village’s total woodland preserve. The rest has been set aside for conservation and beekeeping. The charcoal unit has in turn been divided into 24 sections, one to be cut every year in a quarter-century rotation. 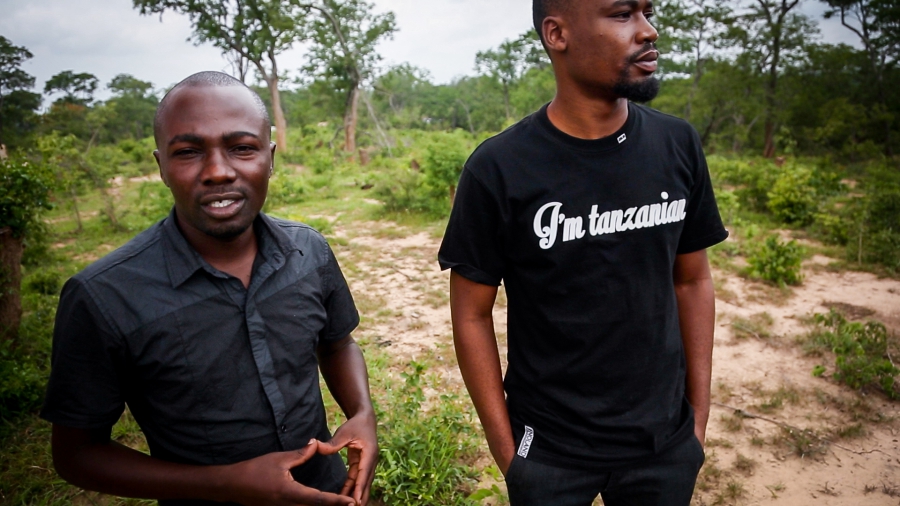 Peter Mtoro  and Othman Lugendo are project officers with the local NGO, Tanzania Forest Conservation Group, which is leading the sustainable charcoal pilot project. So far they have trained over 500 producers in eight participating villages.

The most recently cut section has been completely cleared of all but a few valuable fruit trees. But a closer look shows that this isn’t just any clearcut. The stumps are all about two feet high, with tall green shoots sprouting from their tops.

Peter Mtoro, with Tanzania Forest Conservation Group, a local NGO, says this simple change—not cutting all the way to the ground—allows the trees and their root systems to survive, and the forest to completely regenerate.

“So we believe that after 24 years, these trees will be ready for charcoal production,” Mtoro says, starting the process all over.

But the real incentive for scaling up the sustainable charcoal project has less to do with its environmental impact than its economic one. 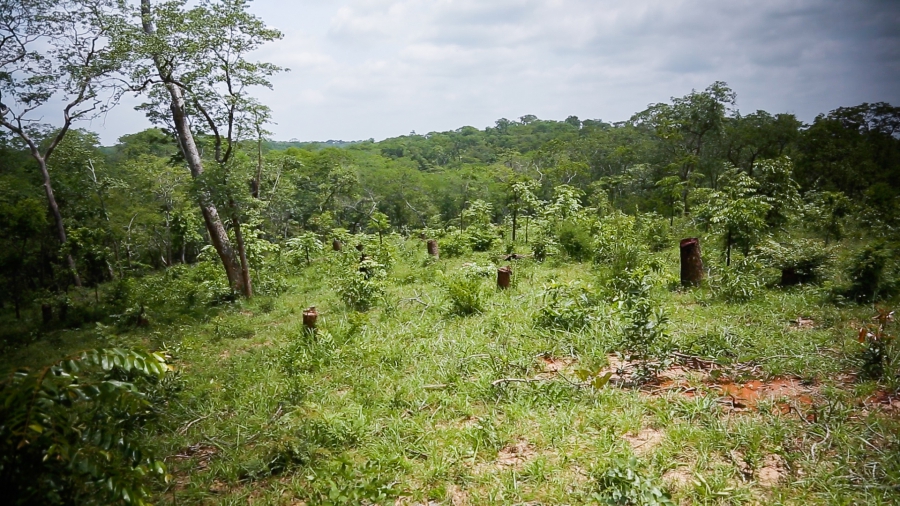 This recently cut village-owned charcoal plot is one of 24 that will be harvested in rotation over 24 years, at which point program organizers hope the forest will be completely regenerated and ready for harvest again. By leaving at least two feet of stump during the charcoal harvest, the trees survive the cut and regenerate, preserving the native forest ecology and preventing erosion.

Charcoal producer Kazeuka says before, only he profited from making charcoal, but now the entire community benefits.

Kazeuka now pays a small licensing fee for every bag he produces, and those fees are quickly adding up — to well over a $100,000 in the eight villages participating so far. The money’s being used for things like forest conservation, clean water systems, new school buildings and, even, in Kazeuka’s village, universal health care.

Kazeuka says harvesting charcoal sustainably also ensures that his two young kids will be able to work as charcoal producers when they grow up.

Conservationist Mtoro says those kinds of benefits have transformed local attitudes toward forest protection. “Why? Because the community knows they can benefit from that forest,” Mtoro says. “So protection of the forest becomes very high.” 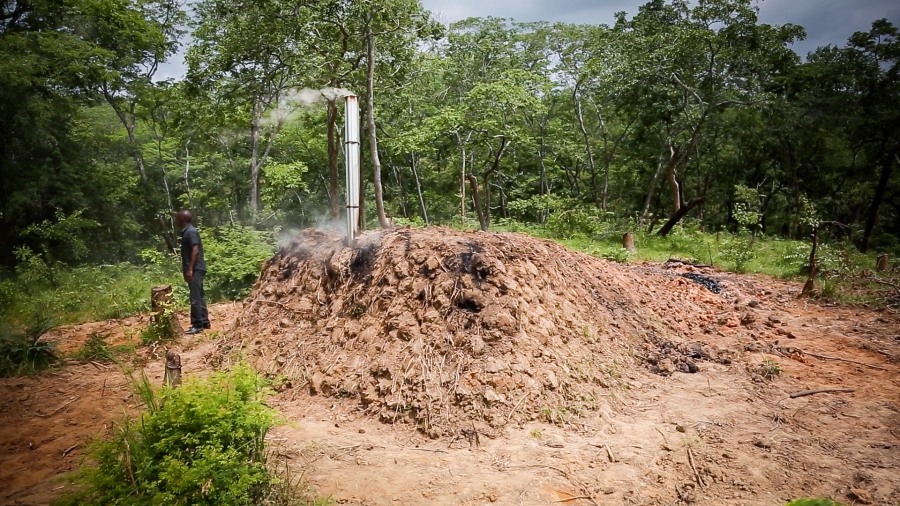 Sustainable charcoal producers in Kilosa use an improved basic earth kiln to produce charcoal more efficiently. The process takes longer—about a week—but the end product is a longer and cleaner burning charcoal.

This is exactly what the Tanzanian government is banking on as it looks into scaling up the sustainable charcoal project. And it’s not the only effort here to tackle the charcoal problem. Among others, a startup company is turning farm waste and coconut husks into alternative briquettes.

But, away from the villages, it’s been hard to get a fire started under these sustainable charcoal efforts. The illegal stuff, Mtoro says, is just cheaper to produce.

“Most of the people who are using charcoal, they are not interested in environmental conservation,” Mtoro says. They’re interested in saving their money.

But they also want the best quality. And Mtoro says the new sustainable charcoal is also a better product. So the real challenge, he says, lies in marketing, and getting the word out to the millions of users in Tanzania’s growing cities before it’s too late. 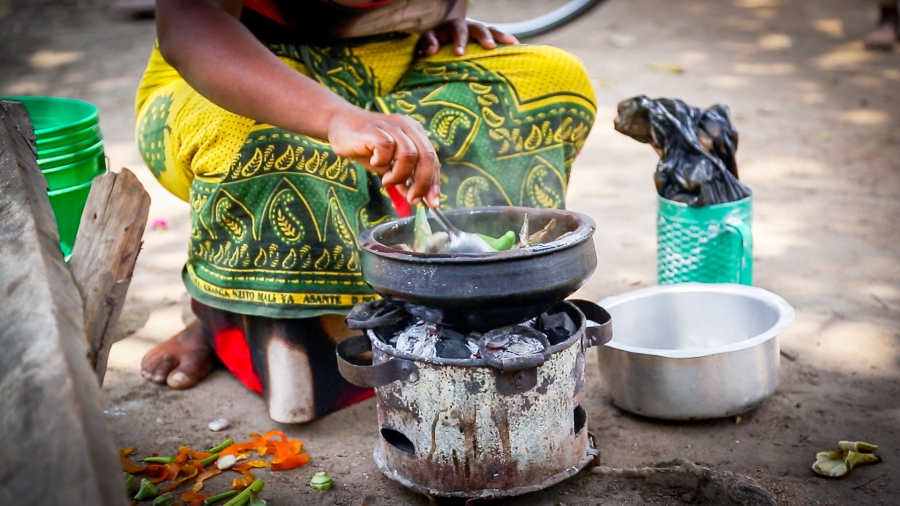 Despite its success in the villages where the pilot sustainable charcoal project has been implemented, the product has been slow to catch on among consumers because of its higher cost. But backers say it's a better product, so the real challenge, they say, lies in marketing.