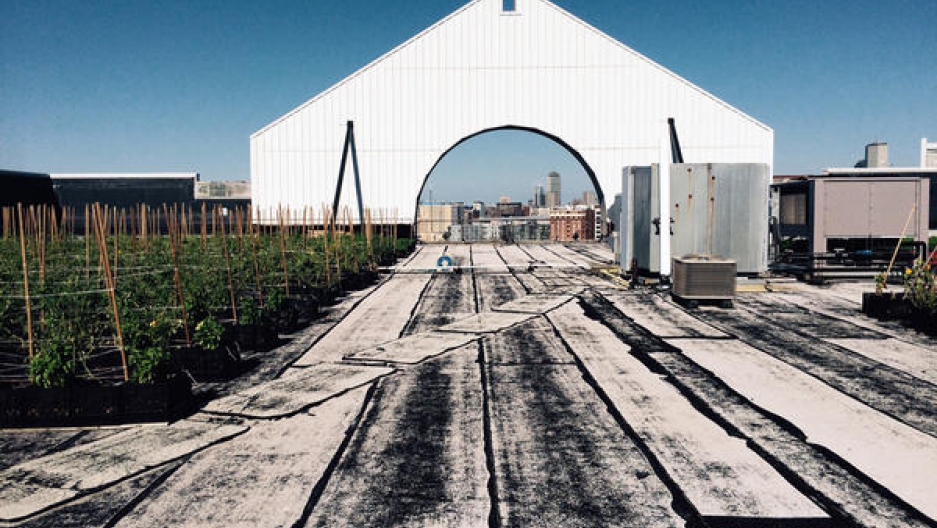 It took Courtney Hennessy and John Stoddard two years to find the right rooftop for a farm — one that was big enough, could take enough weight, wasn’t being used for something else like solar panels, and had an agreeable landlord.

"We literally biked around looking at big buildings,” Hennessy says, crouching on the roof they eventually leased for their business, Higher Ground Farm, atop the Boston Design Center in the city's Seaport District, harvesting arugula. Restaurants buy the produce and Stoddard delivers it by bike. Higher Ground also has a farmstand.

With farmland expensive and scarce, more people like Hennessy and Stoddard are thinking about growing food in urban areas, and some startups have turned their attention toward solving that problem.

"This is definitely a labor of love," Hennessy says. "We’re not paying ourselves anything yet."

Hennessy and Stoddard each work two other jobs. So far their rooftop farm is only breaking even, but they want to find out if the local food movement has reached a tipping point where it’s big enough to support a rooftop farm that can actually make money. As she continues to cut arugula, Hennessy says she and Stoddard are willing to take risks to find out.

"There’s a lot of really amazing urban agriculture going on in this country, but all of it’s through nonprofits and grant funding," Hennessy says. "And we’re determined to see if we can do this as a for-profit company. Can you live and work in a city and still be a farmer, I guess, would be the thing we’re trying to figure out.”

For a new generation of entrepreneurs, investing in the future of urban agriculture makes sense. Scientists predict population growth of billions within the next several decades, with most of those people living in urban areas. Young businessmen and women like Hennessy and Stoddard think the growing urban populations will want to stay connected to their food.

"This is perhaps the most entrepreneurial generation we’ve seen in a long time," says Catherine Bertini, a former executive director of the United Nation’s World Food Program. Bertini also served as an assistant secretary at the US Department of Agriculture, where she oversaw the design of the Food Guide Pyramid. Bertini says these young farmers are driven by the same basic pride as their predecessors.

"I don’t think that changes whether it’s a 50-year-old farmer that’s the fourth generation to farm his or her land or whether it’s a 25-year-old who’s decided to grow food on a rooftop," she says. "It’s really rewarding if you can make it.”

Still, while she supports the effort, Bertini doesn’t think these small business can have a big impact on our food system.

"I’d like to be proven wrong, but it’s not going to change the world because it’s the big-volume farms that can do that," she says. "And until these small projects become very large, they’re not going to have a big impact."

From Rooftop To Pantry 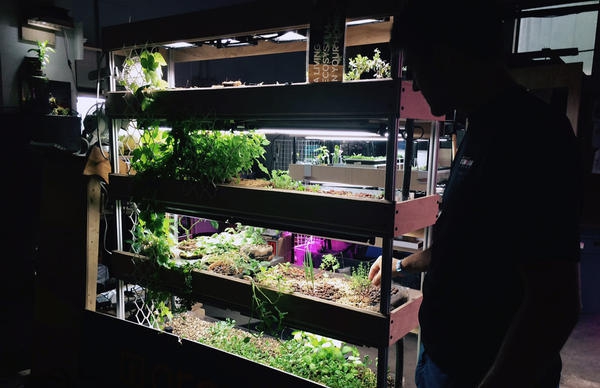 But some of these new entrepreneurs are thinking big. Jamie Byron and Gabe Blanchet graduated from MIT and started Grove Labs two years ago with the idea to make every living room a potential growing space.

"In the future we see people being able to grow lots of things in their home and maybe have an entire room that’s dedicated to growing,” Byron says.

Their product is a cabinet that allows people to grow fruits and vegetables year-round in the home. It’s connected to the internet, controlled by an app on your phone, and designed to make urban farming easy and engaging.

There are a few models set up in a space at Greentown Labs in nearby Somerville, which they share with other startups. Each wooden cabinet, with several components, is about the size of an entertainment center.

At the heart of the cabinet system is a fish swimming in a tank. The waste from that fish is sucked into tubes and converted into nitrate fertilizer. The fertilizer is pumped around the cabinet to trays filled with brown clay pebbles. That’s where the fruits and vegetables grow, with the pebbles serving as soil. Byron says once you get the system up and running, you can harvest enough for about two small salads everyday.

"The reality with a new technology like this is we want to make sure it’s beautiful and works really well," Blanchet says. "And so the price point isn’t — we didn’t just go for the bare minimum we could scrape by with. So for those who are really price sensitive, we plan to release do-it-yourself plans so people can build their own ecosystem.”

Byron and Blanchet hope the price goes down as the LED light technology improves. It has actually already made significant progress — people have tried to build something similar for years but the growing lights used too much energy. It only made sense to spend that much money to grow certain cash crops.

"It only made sense for marijuana," Blanchet says. "And that’s why there’s this strong association with marijuana and indoor growing. But that’s only because of the intense energy that was required. Now with LEDs we can move away from that.”

Bryon and Blanchet say young people today — with buying power tomorrow — care about where their food comes from and how it’s grown.

"I think in general our generation is starting to realize a lot of the mistakes we’ve made in past generations," Byron said. "I think a lot of us are motivated to change those things."

The two of them admit they’re young and naive, but they say that’s an asset. They’re idealistic enough to believe they can help feed the future crowded, urban world — and make money.