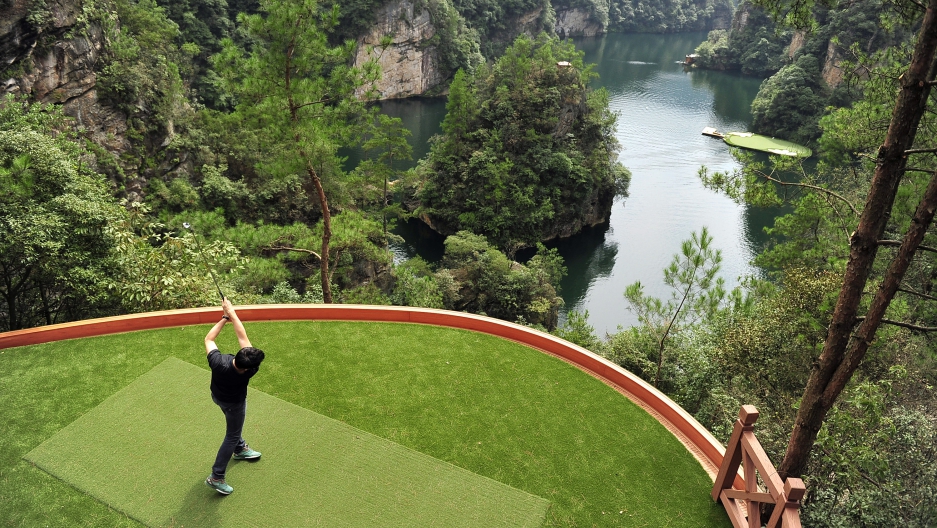 A staff member plays a shot towards a putting green on a lake from a tee ground on top of a hill, at Zhangjiajie, Hunan province September 23, 2014.

China has seen the enemy, and that enemy is golf.

Yes. Golf. That seemingly most Western of sports is a unique prism on modern China. Many Chinese want to play, but the Communist Party doesn't like the game. And today, Communist Party officials officially barred its 88 million members from belonging to a golf club.

But the ban is part of Chinese President Xi Jinping's drive to root out extravagance and corruption. For golf has played a role in recent high-profile corruption cases in China.

"This has been a historically bad year for golf in China and that's really saying a lot," says Dan Washburn, author of "The Forbidden Game: Golf and the Chinese Dream." "The game has never really been welcomed with open arms by the country."

Golf was a target of Mao.

"Before he came to power, golf did thrive amongst a certain population," says Washburn. "They were mostly foreign, mostly elite. And when the communists came to power, the sport was in effect, banned, and the existing courses were dug up or repurposed."

So why did the Communists hate golf?

"It was a symbol for everything that Mao was standing against," he says.

Picture a wealthy guy in an argyle sweater and you get the idea. But this changed as China opened itself up to the world. Golf came back as a way to attract foreign investment. "The first modern golf course was opened in 1984 and it was designed by Arnold Palmer."

Today, about less than 1 percent of the population in China plays golf. Since the number is so low will it actually have any impact on rooting out corruption?

"I think as far as golf goes, party members and public officials will definitely think twice before teeing it up," he says. "But a lot of the results of this will be largely symbolic."