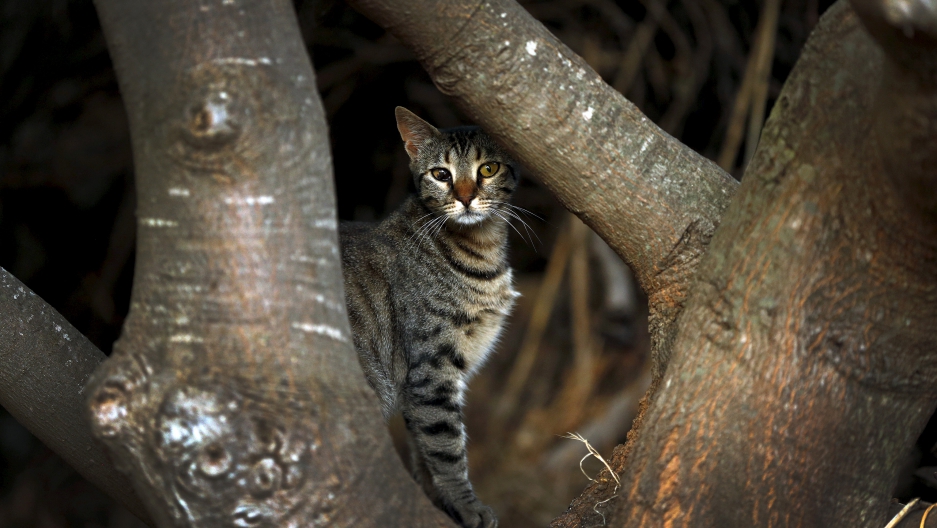 A feral cat waits for scraps near a restaurant in the village of Meyisti on the Island of Kastellorizo, the most easterly of the islands in Greece.

It’s open season on wild cats Down Under.

Over the next five years, Australia will slaughter two million feral felines as part of a plan to protect native animals from the "efficient predators," which have been a “major contributor” to the extinction of at least 27 mammals since they were introduced to Australia by Europeans more than 200 years ago. (You can blame them for exterminating the lesser bilby and desert bandicoot.)

The Lesser #Bilby is extinct, but the #Greater still has a chance! - http://t.co/tccT9XsT2u pic.twitter.com/U9yz8e99a9

There are at least 20 million feral cats prowling Australia, and together they kill an estimated 75 million native animals every day.

With the survival of more than 100 native animals at risk from the marauding moggies (that's Australian for cats), the government has decided to take drastic action to prevent Australia's already worrying extinction record from getting worse.

The “Threatened Species Strategy” will target roughly 10 percent of the feral cat population and will involve a mixture of baiting, trapping and shooting the predatory pussycats. It also involves establishing “safe havens” for threatened species.

The government will track the numbers of cats killed with the “Feral Cat Scan” smartphone app. So you can follow along at home, if that's your kind of thing.

But the eradication plan has raised the hackles of animal lovers and welfare advocates around the world, some of whom have described the cull as “animal genocide.”

The cats have some celebrity defenders, as you'd expect.

Former actress turned animal rights defender Brigitte Bardot wrote to Australian Environment Minister Greg Hunt shortly after the cull was first announced in July, saying it was “scandalous” and “barbaric." She implored the government to neuter the wild animals instead of killing them.

More recently, Steven Morrissey, the former lead singer of English rock band The Smiths, said the plan was “idiocy” and described the feral cats as "two million smaller versions of Cecil the Lion.”

Neuter not kill, you can control by putting it in their food http://t.co/pMDixD7AmH

Australian officials formally responded this month to their celebrity critics.

Gregory Andrews, who has been appointed Australia’s threatened species commissioner and whose duties will involve overseeing the cull, wrote letters to both Bardot and Morrissey defending the extermination program, the Guardian reports.

“Our native species are simply not equipped to coexist with feral cats; they did not evolve alongside predators like the feral cat. As a result, they are highly vulnerable to this threat and need our help,” Andrews said.

Debate about the controversial plan is likely to continue for as long as it takes to kill two million cats. On Tuesday, The New York Times' Editorial Board weighed in. The paper defended the cull, saying we must defend "the diversity and health of the species with which we share our planet," and urged Australia to "use the least painful methods to cull the cats."

Animal culls are nothing new in Australia. Kangaroos, sharks, horses and camels have been the targets of sanctioned mass killings.

While feral cats are the main victims of this latest extermination, they're not the only animals that should be looking over their shoulders.

Foxes, rats and rabbits are also on the government's list of "invasive species" in need of "management."