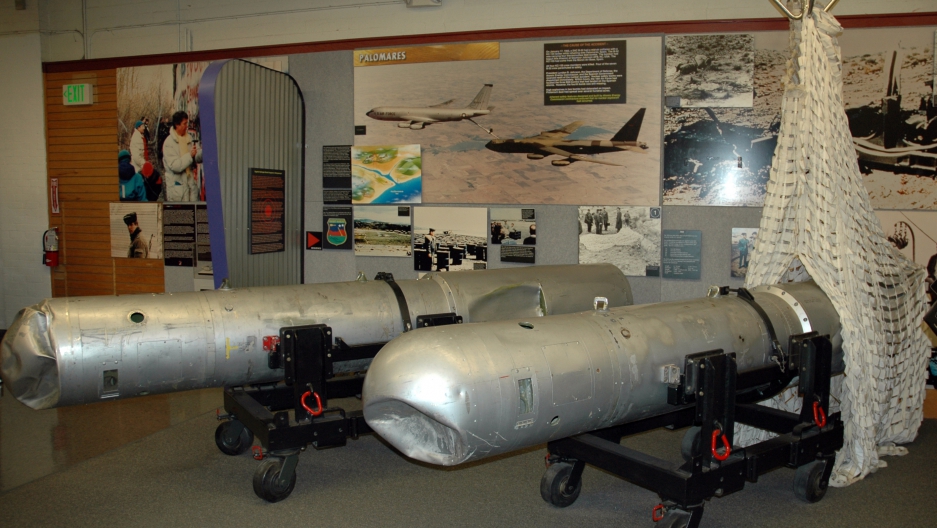 The casings of two B28 nuclear bombs involved in the Palomares incident are on display at the National Museum of Nuclear Science and History in Albuquerque, N.M.

On January 17, 1966, at the height of the Cold War, a United States bomber and a tanker collided above the small farming village of Palomares, Spain, during a routine midair refueling. The explosion killed seven airmen and scattered the bomber’s payload — four unarmed thermonuclear bombs—across miles of coastline.

One bomb fell into the Mediterranean, where the US Navy found it two and a half months later. The other three crashed onto land; two cracked open and dispersed plutonium with the wind. The contaminated land was partially cleaned, and the United States shipped radioactive dirt and debris to America for disposal.

The accident at Palomares remains the worst nuclear weapons accident in history. I told the story in my 2009 book, "The Day We Lost the H-Bomb."

When I finished my book, a few threads were still hanging. While the United States and Spanish governments had officially declared the cleanup job complete, it eventually became clear that it was not.

In the decades that followed, scientists, journalists and dogged activists found two buried trenches of radioactive debris near Palomares, and discovered that about 100 acres of land remained contaminated with plutonium. Grassroots activists petitioned the US government to finish the cleanup job. I played a bit role in the effort, sponsoring a petition on change.org. The cause was good but fruitless, I thought. Don Quixote de Palomares.

I was surprised, then, when my e-mail and Twitter lit up on October 19 with the news that US Secretary of State John Kerry and Spanish Foreign Minister José Manuel García-Margallo had agreed to "negotiate an agreement" to clean up Palomares — again — and dispose of the contaminated soil at a facility in Nevada.

The news of the agreement came as I was covering a mammoth neuroscience conference in Chicago, and reflecting on the clash of technology and society.

At the conference I had purchased the book "Do No Harm," a memoir by British neurosurgeon Henry Marsh, who writes in the preface that he adores working with Americans: “I love their optimism, their faith that any problem can be solved if enough hard work and money is thrown at it.” His words were borne out at the neuroscience conference, where thousands of scientists bombarded each other — and us journalists — with optimism, promises of future therapies to halt Alzheimer’s, thwart addiction, cure eating disorders, treat Down syndrome babies in their mother’s womb.

The conference was heady and alluring, and yet I’ve been reporting on science long enough to be wary of the technological fix. Marsh, near retirement when he wrote his memoir, was wary as well. “When I visit American hospitals and see the extremes to which treatment can sometimes be pushed,” he wrote, “I wonder whether the doctors and the patients there have yet to understand that the famous dictum that in America death is optional, was meant as a joke.”

The US agreement with Spain made me feel like Marsh, filled at once with great admiration and melancholy.

Admiration because the agreement represents America’s can-do spirit and sense of justice: We made the mess; we’ll clean it up. Melancholy because, well, how?

While researching my book, I interviewed many American servicemen involved with the cleanup. I questioned them closely, and came away thinking that most of them — most, not all — sincerely believed that they decontaminated the land and had done right by Spain. They used the best technology they had, and worked diligently.

I am optimistic, perhaps naively so, that the next cleanup crew will do the same. But I’m not sure that it’s possible to completely decontaminate 100 acres of land near a populated coastline. I’m no neurosurgeon, but I’m not sure this patient can be made whole.

This may sound un-American, but perhaps Palomares offers us an opportunity to face the limits of technology and make peace with them.

If the US can decontaminate the land in Spain completely, we should. If we can’t, we should admit our shortcomings and make amends. And maybe, just maybe, we should consider applying this philosophy to more aspects of our culture. Science and technology can give us new knees and safer cars, vaccines against disease and iPhones that take awesome photos. But it can’t keep us eternally young, it can’t cure all our grief, it can’t stave off death forever.

We can use technology best by knowing its limits — and learning to embrace them.

Barbara Moran is the senior science writer for Boston University’s Research website, and author of "The Day We Lost the H-Bomb," the definitive history of the Palomares nuclear accident.