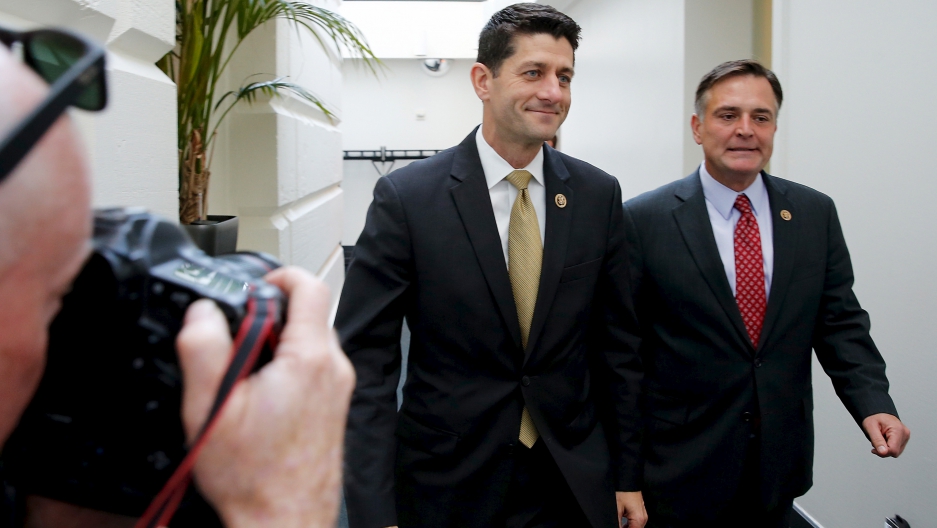 US Representative Paul Ryan departs following a House Republican caucus meeting at the US Capitol in Washington, October 21, 2015.

Congressional Republicans have a week to decide who the next speaker of the House of Representatives will be. As current House Speaker John Boehner prepares to step down, Wisconsin Representative Paul Ryan says he’s willing to step up, if a few concessions are made.

Rep. Ryan is willing to take a shot at leading the fractured Republican party, if the GOP is willing to unite behind him, endorse him publicly, and, essentially, cut him some slack — something that Republicans, at least in recent years, haven’t done for Boehner.

“We need to update our House rules so that everyone can be a more effective representative,” Ryan said Tuesday. “This is, after all, the people's House. But we need to do this as a team and it needs to include fixes that ensure we do not experience constant leadership challenges and crisis.”

In that statement, Ryan was alluding to a little bit of “House arcana,” according to Takeaway Washington Correspondent Todd Zwillich.

“He’s talking about the motion to vacate the chair,” says Zwillich. “What is that? That’s the House rule that conservatives had been holding over John Boehner for a couple of months — it’s a thing that lets them oust the speaker if they have the votes. Paul Ryan essentially told [lawmakers] last night, ‘I’m not doing this job with a gun pointed at my head.’ He also said, ‘I’m willing to take arrows in the chest, but not in the back.’”

Ryan’s stance has angered more than a few House Republicans in the Freedom Caucus, a group of roughly 40 conservatives ushered in during the rise of the Tea Party movement in 2011.

“They say they don’t like it — that it’s taking away a key part of their power,” says Zwillich. “They’re not going to operate under a system where they have no power over the speaker and the speaker has power over them. So far, [Ryan’s] demands are a non-starter.”

Those in the right-wing news media are also not impressed by Ryan. The Conservative Review issues every congressional lawmaker a "score" — an ideological litmus test to determine whether someone is a "liberal sellout" or a "pure conservative." Ryan's score falls around 58 percent, while Boehner comes in at 37 percent.

“Paul Ryan voted for TARP; Paul Ryan has voted for virtually every debt ceiling increase,” said Levin. “He’s supported virtually every budget. I just want to know what this speaker's agenda will be. He's supported by some truly odd politicians — including Harry Reid, who endorsed him today.”

Zwillich says that the conservative news media has worked hard against Speaker Boehner and California Republican Representative Kevin McCarthy — the man who was the likely choice to replace Boehner, but who abruptly withdrew from the speaker race earlier this month, apparently undone by the same forces that drove Boehner to resign.

“Mark Levin is not alone — Laura Ingraham is a very popular radio host, and took to Twitter last night, saying [Ryan] is ‘a terrible deal for conservatives,’” says Zwillich. “Conservatives themselves in the House say they’re not comfortable with all this. They say that Paul Ryan wants all the power of the speakership without the responsibility.”

Among the conservatives pushing back against Rep. Ryan are Congressman David Brat of Virginia, the man who beat former Republican power broker Eric Cantor in a primary last year.

"There's 24 people running, right?” Brat told reporters on Tuesday. “Last time I checked, it's a democracy we live in. It's healthy to have a race and competition. I mean, give me any other scenario where you got 20 people running and there's a expectation that one person should win.”

So is there any hope that another conservative could get the speakership?

“The fear is that there is no one else in Republican ranks who can unify the House, or that can come even close to unifying it,” says Zwillich. “That fact has some moderate Republicans talking to Democrats about the possibility of a coalition speakership if Ryan should fail in this effort. Ryan thinks he’s in a position here to extract conditions to do this under his own terms and nobody else’s. But this is not settled.”

This story was adapted from the daily PRI radio show The Takeaway, which follows the national conversation. Follow Todd Zwillich and T. J. Raphael on Twitter.