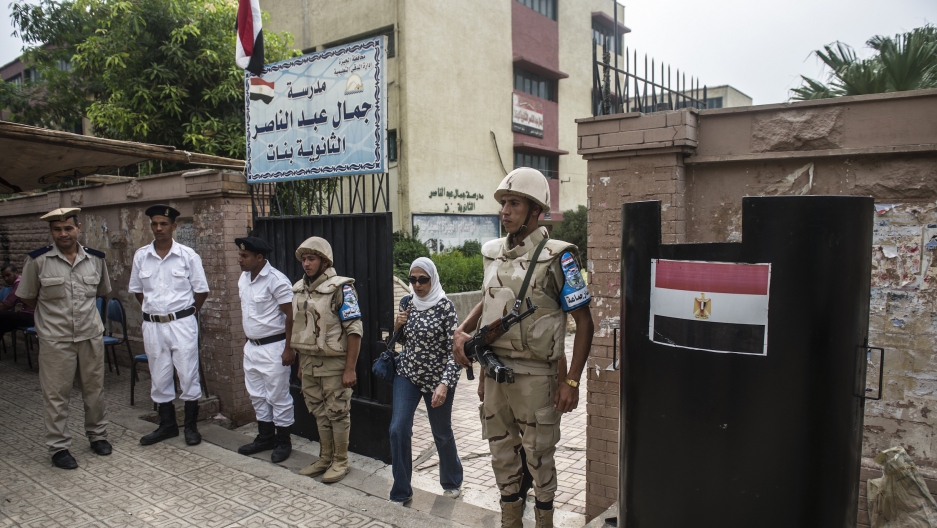 Egyptians soldiers and police stand guard outside a polling station in the Dokki neighbourhood in Cairo's Giza district, on the second day voting in Egypt's parliamentary elections on October 19, 2015.
Credit: Khaled Desouki
Share

Egyptians have lost count of how many elections there have been since dictator Hosni Mubarak was toppled in 2011. Many of them just don’t care anymore.

The country went to the polls to vote for a new parliament on Sunday and Monday — or rather, some of the country did. Pictures of empty voting stations and sleeping poll workers spread across social media during the two days of ballot-casting.

It's been a crowded day in #EgyptElections second day pic.twitter.com/S1dJ4Lyowo

Egypt has been without a parliament since the last one was dissolved by former president Mohamed Morsi in 2012.

Half of Egypt's provinces voted this week; the rest of the country is slated to vote in the next round on Nov. 22 and 23. Pro-state talk show hosts tried to shame, scare and cajole the Egyptian populace into participating, all to no avail.

Egyptians reported empty polling stations and an atmosphere of apathy. Even the government’s last-minute half-day national holiday and free transportation to polling stations failed to give the turnout a significant boost.

Democracy has had a rough road in Egypt in recent years, and, well, always. For years under Mubarak, ballot stuffing and election rigging were rife. Following his ouster there were strongly contested parliamentary and presidential elections in which the Islamist Muslim Brotherhood party took the majority of votes.

But after a turbulent year, Brotherhood President Morsi was swept from power by the army, jailed, and his party declared a terrorist organization. The general who took power at that time, Abdel Fattah el-Sisi, has since donned civilian attire and was elected in May 2014. The environment in Egypt is increasingly intolerant of any form of opposition, whether from Islamists or from the left.

I feel lighter than an egyptian ballot box #محدش_راح

In light of the empty polling stations, Bassem Youssef, Egypt’s answer to Jon Stewart, had some choice words:

"For the fourth year voters are threatened with a 500-pound fine for not voting. It's the only source of income they have left," he wrote on Twitter.

"I feel lighter than an Egyptian ballot box" said one user. Another quipped, "Two lonely people we were strangers in the lagna (Arabic word for polling station)" with the #NoOneWent hashtag.

Another phrase making the rounds on Egyptian social media: “instead of voting," used to discuss all the things one could do instead of heading to the polls.

For example, "Instead of voting,' it's better to watch a film," or "'Instead of voting' go and kiss the hands of your father and mother and ask them why they had you in Egypt."

But behind the dark humor is deep disillusionment.

“We are not even actively boycotting," said Mohamed Nabil, a member of the now-banned April 6th movement. "We simply don't care."