Every large city has traffic headaches. And at some point the debate begins: to build or not to build a subway. In Bogotá, they've been having this argument about traffic and a subway for some 60 years.

It's a decision no city takes lightly — digging tunnels and constructing an elaborate train system underground is hugely expensive. But can you imagine New York or London without a subway? Bogotá is a city of 8 million, and the leading candidates for the city's next mayor, who will be elected Sunday, say the city needs a subway to be a modern, 21st century city.

But there's an alternative too. In the year 2000, Bogotá opened a highly-effective mass transit bus system called the TransMilenio. The rapid-transit buses transformed Bogotá from what was widely considered to be one of the worst cities in the world. Bogotá topped lists for crime, murder and traffic congestion in the 1990s. The streets were a chaotic mess, drivers ignored traffic lights and sidewalks effectively served as parking lots.

You can still see remnants of those days as private buses compete for passengers waiting for a ride.

“War of the penny means you are fighting for each penny,” says Dario Hidalgo with the World Resources Institute's Ross Center for Sustainable Cities.

“You just need to hail, like you hail anything,” says Hidalgo. “Buses stop anywhere.”

This informal system creates traffic and accidents. It used to be much worse — there were 20,000 buses 15 years ago, now there are closer to 6,000.

The city is working toward eliminating private buses entirely by expanding the TransMilenio system. It should also be noted that many people prefer the private buses, mainly because they’re cheaper. But not faster.

TransMilenio buses run in two dedicated lanes on wide boulevards. You buy a ticket and enter a metal and glass station on an elevated center island.  Essentially, it’s an above-ground subway. The boarding process is quick, as are the buses.

“The system in Bogotá, in the whole seven corridors, is moving 2.4 million passengers every day in 112 kilometers (70 miles),” says Hidalgo.

Bogotá has the largest, and among the fastest, bus rapid transit (BRT) systems in the world. Urban planners from across the globe come here to study the design. Hidalgo is proud of that — he’s a former deputy general manager of TransMilenio.

But the system has become a victim of its own success. The buses are packed. When I rode with Hidalgo for a few hours, we were standing body to body. 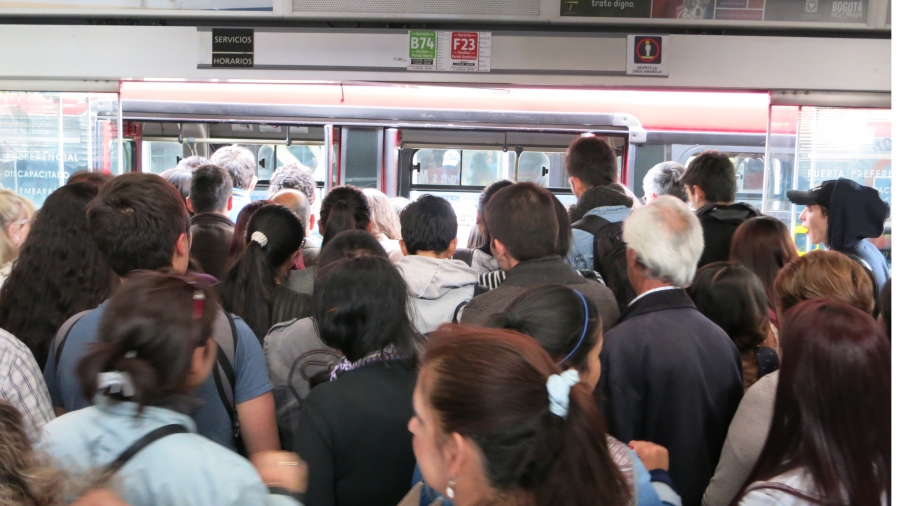 Passengers have reported waits up to 45 minutes at busy TransMilenio stations.

“It gets much more crowded than this,” he, and other passengers, warned me. Just wait for rush hour.

The Transmilenio was designed to carry six passengers per square meter. That’s like putting four baseball bases on the ground, side by side in a square, and telling six people to stand in that area. Hidalgo says in Sweden, for instance, they give riders more elbow room.

“They designed for two passengers per square meter. So in the same space that you have two Swedes, you have six Colombians,” Hidalgo says with a laugh.

When the TransMilenio launched, 90 percent of Bogotános approved of the system. Now it’s about 20 percent. In my informal poll, it’s closer to 0 percent. But Bogotános still ride.

One man I met on board grumbled about the crowds on the bus, but says he still takes it every day because it’s the fastest way to get around. These points were echoed by several other passengers.

And the point about it being fast, well, that's only if you can get on — it can take 45 minutes to board at some stations during rush hour.

So the next day I opted for a taxi across town to meet Carlos Felipe Pardo, the executive director of Despacio, a non-profit that researches ways to make cities more liveable. My cab didn’t work out so well though, I arrived 30 minutes late.

I apologized and asked Pardo if he often starts meetings late due to people being stuck in traffic.

“It’s really, really difficult to know really when you’re going to arrive, if you’re going to take a taxi for example,” says Pardo. “Since 2004, we’ve been limping in terms of improvement, and development of new projects and keeping up with the pace that we had been having.”

So, people have found other ways to get around.

“People either started to buy a car, buy a motorbike, and then we just started to saturate all roads,” says Pardo.

Increased congestion is costing the city a lot — when goods or services, or employees, can’t get where they need to go, it stifles growth.

“Congestion can cost 2 or 3 percent of (the city’s) GDP,” says Juan Pablo Bocajero at The University of the Andes.

That translates to about $3 billion to $5 billion lost annually. Those calculations are debated though — those figures compare Bogotá today to an idealized city with zero traffic. Some traffic is healthy though. After all, you don’t want to build an empty highway or run unoccupied buses. So, Bocajero prefers a more conservative estimate, saying Bogotá is losing .5 percent of its GDP due to traffic, closer to $800 million a year — still no trivial amount.

All of this leads many to argue that a 21st century city of around 8 million people needs a subway. There’s simply no way around it.

Bogotá’s latest design would cover 18 miles, or 30 kilometers. The cost: about $400 million per mile. Another mile of a bus rapid transit, or BRT, would cost less than a tenth of that.

So, here’s the big question: invest in a subway or the bus?

Ask somebody who studies transport economics like Bocajero and he’ll say this.

Bogotá's TransMilenio system operates like an above-ground subway with stations and quick boarding.

I put a similar question to transportation planner Hidalgo: Does Bogotá need a subway?

There are clear advantages to going underground. First, Bogotá’s new subway would have nearly twice the capacity of a TransMilenio bus line. It would be faster than most of Bogotá’s buses, but likely not as fast as the TransMilenio expresses that make fewer stops.

Second, running big diesel buses all over the city generates a lot of pollution. Bogotá is introducing hybrid electric and diesel buses, but they'd still be dirtier than a subway in Bogotá that would run on electricity fuelled by hydropower.

For politicians, these arguments for a subway make sense. All of the leading candidates in this weekend’s mayoral election are promising one, as have politiicans in the past. But, as with past promises, they’d still need to find the funds to actually build it.

In Bogotá, many people I met don’t care what city leaders do to address traffic, they just want them to do something.

A previous version of this story misspelled Juan Pablo Bocajero's name. We regret this error.