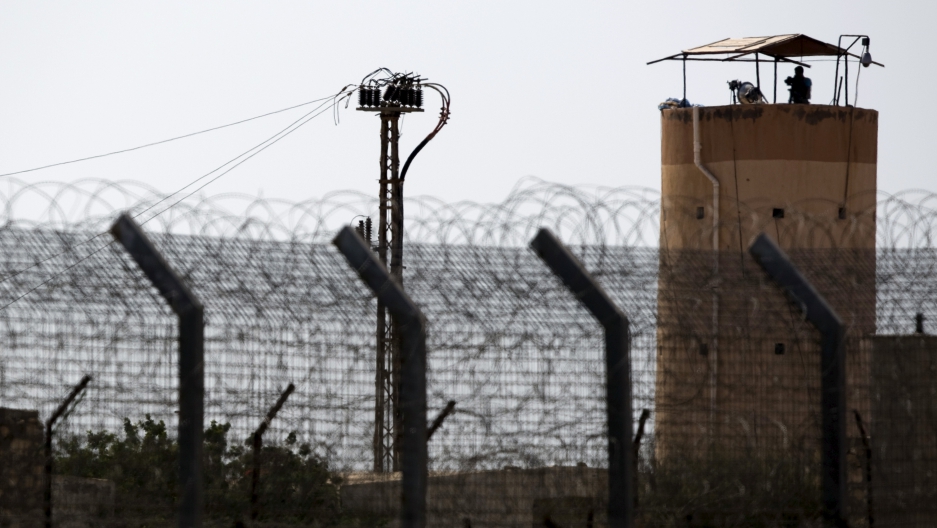 A member of Egypt's security forces stands on a watchtower in North Sinai as seen from across the border in southern Israel July 1, 2015.

Thousands of young migrants and refugees are clamoring to get into the European Union, a place that is home to a graying population and a group of nations that could use an influx of young entrepreneurs.

As Philippe Legrain, former economic adviser to the president of the European Commission, told The Takeaway last month, "These asylum seekers and refugees can also play a very valuable role as workers, as taxpayers, very often also as innovators and entrepreneurs who can boost growth and help cope with an aging society."

Alex Tabarrok, a professor of economics at George Mason University, takes Legrain's argument one step further. Tabarrok, author of the forthcoming book "How to Save Humanity," says the world should do away with borders altogether.

“Borders are fine for controlling governments; I’m not against different places having different rules,” he says. “But they’re bad for controlling people. I’d like to see a much more open world — a world in which people are free to move about.”

Tabarrok says that the world should do away with borders for both economic and moral reasons.

“Some people in the world, through no fault of their own, are born in an economic desert, or they’re born in a place where there’s a civil war going on,” he says. “We have imprisoned them there by building walls, barriers and sending people with machine guns and saying, ‘You can’t move.’”

Though no serious leader of a nation-state would earnestly suggest the dissolution of national borders, Tabarrok says there is historical precedent for such an idea.

“If you go back to the 19th century in the United States, for example, we had virtually completely open borders,” he says. “Anyone from anywhere in the world could come to the United States and make a home here with almost no paperwork whatsoever.”

At the time, the US government was trying to encourage settlers to move to its vast and newly-acquired Western territories, something that helped to push out existing residents, like the Native Americans. But Tabarrok says the American West still has plenty of land to offer newcomers.

“There is still plenty of room to grow in the United States, and in the developed world more generally,” he says. “We have lots and lots of room, and we could have a lot more people.”

As technology breaks down barriers between communication and commerce, Tabarrok argues that it’s time to fundamentally rethink the nation-state.

“It’s quite amazing when you look around,” he says. “Ideas flow freely all throughout the world, and capital — money — flows freely throughout the entire world. The only thing which doesn’t flow freely is labor. And yet, the right to vote with one’s feet, the right to migrate, and the right to move — this is one of the most fundamental human rights. And yet, in our world today, we’ve divided it, we’ve separated it, and we’ve created a system, really, of global apartheid.”

According to Tabarrok, economists have calculated that a world with completely open borders could double global GDP. And not just for one year, but for every year going forward.

“Even if we allowed, just in the developed world, our labor force to increase by say one percent, that alone would be worth more than all of the world’s foreign aid combined,” he says.

It seems like a nice idea in theory, but the political will for such a plan doesn't exist. But Tabarrok says the tide may one day shift.

“We feel now today that it’s wrong to discriminate against someone on the basis of race, gender, or sexual preference. And yet, we discriminate against people based upon where they’re born,” he says. “I think when people realize this is a moral issue, they’ll change their feelings about borders.”