Accused child sex abuser Father Jan Van Dael plays with the hair of a boy collecting a soup donation, in a slum outside Caucaia, Brazil.

Two priests who have been accused of sexual abuse in the United States or Europe and were the subject of a GlobalPost investigation last month are no longer actively ministering in the South American communities where they've relocated.

Another appears to have moved to a different country, and an admitted child molester continues to work at a church in Peru. A fifth priest we investigated had already left the church for personal reasons when GlobalPost caught up with him.

We still haven’t received any response from either the Vatican or Cardinal Sean O’Malley, who heads up the Pontifical Commission for the Protection of Minors.

More from the series:

Could the Vatican face racketeering charges for harboring abusive clergy?

Since the investigation was published, GlobalPost and PRI announced they would be merging their editorial operations sometime later this year. Here’s our one-month update on the status of the fugitive fathers featured in their report:

According to the Diocese of Fortaleza’s website, Belgian priest Jan Van Dael was suspended shortly after GlobalPost started asking questions about him on a reporting trip to Fortaleza earlier this year. 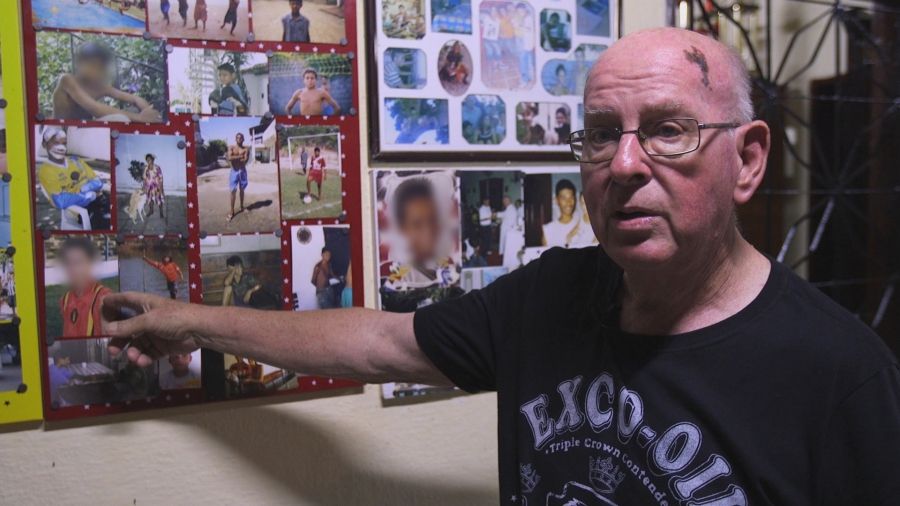 Father Jan Van Dael shows off his collection of portraits — most of young boys — on the veranda outside his home. The building once housed orphans, but Van Dael closed that operation down two years ago.

Miguel Brandao, the archdiocese’s pastoral secretary, confirmed in a phone interview that Van Dael has had his faculties removed and may no longer celebrate mass at local churches.

“He can attend church, just like any Catholic, but he cannot celebrate mass or participate in any way as a priest,” Brandao said. “He does not have any parish here in Fortaleza.”

Colombian priest Federico Fernandez Baeza was working at a university in Cartagena when GlobalPost attempted to confront and film him earlier this year. Fernandez avoided our cameras, but we did speak with various university officials and filmed interviews with students in front of the university.

After GlobalPost revealed Fernandez’s past to university officials, the university immediately suspended him, said Hector Eduardo Lugo, the most senior Franciscan official in Colombia.

“We ordered him to leave the university,” Lugo said in a phone interview. “We didn’t know about his past. We weren’t his superiors at the time he returned to Colombia.”

Lugo said Fernandez is also currently being investigated internally by church lawyers in Colombia, who will, in turn, send a report to the Vatican. For the time being, Fernandez is being housed in a treatment facility for sick priests outside the city of Medellin, Lugo said.

GlobalPost called Fernandez at the treatment center. When a reporter introduced himself, the priest hung up the phone.

We first wrote about Carlos Urrutigoity in June 2014.

The Argentine priest had transferred to Paraguay after leaving the Diocese of Scranton, Pennsylvania in disgrace after he was accused of molesting a young seminarian. Urrutigoity had risen to the position of second-in-command of the Diocese of Ciudad Del Este in eastern Paraguay. 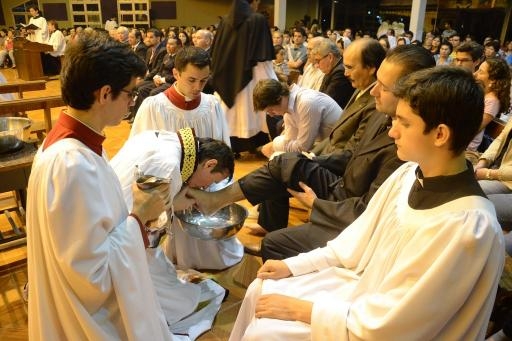 Father Carlos Urrutigoity kisses the foot of a congregant in Ciudad Del Este.

One month after GlobalPost published its investigation on Urrutigoity, the Vatican sent a cardinal and a bishop to Paraguay on a well-publicized visit. The purpose of the trip was shrouded in secrecy, but a few weeks later, both Urrutigoity and the bishop of Ciudad del Este who had sheltered and promoted him were removed from their respective positions by the Vatican.

But Urrutigoity doesn’t appear to have been “laicized,” or officially expelled from the church.

A woman at Urrutigoity’s parish in Paraguay, who gave her name only as “Diana,” said Thursday that Urrutigoity is still a priest in good standing and is still assigned to the Diocese of Ciudad Del Este. She said he was currently “on sabbatical” and is “coming and going.”

Two organizations that track priest assignments in Argentina had no record of Urrutigoity being a member of a diocese in that country.

Paul Madden is an Irish priest who admits molesting a 13-year-old boy on a mission trip while he was assigned to the Diocese of Jackson, Mississippi. We tracked him down to the tiny fishing village of Puerto Huarmey, Peru, in the Catholic Diocese of Chimbote.

During an interview in April, Vicar General Juan Roger Rodriguez Ruiz, the church’s second-in-command in Chimbote, told GlobalPost he was “surprised” to hear about Madden’s past and promised a full investigation into the priest. “Some may find it hard, even painful, that the bishop has to investigate a priest, but it has to be done,” Rodriguez said.

Yet residents of Puerto Huarmey confirmed that Madden is still leading mass there.

In a phone interview this week, Rodriguez said that Madden is “one of the family” of the Diocese of Chimbote. “His case was already judged,” the vicar general added.

He said the statute of limitations had already passed for the molestation case, which is why Madden is welcome at the diocese.

Just after GlobalPost’s investigation, Madden’s old diocese in Mississippi issued a lengthy statement distancing itself from the priest and stressing that he has been suspended from their diocese. The statement says the bishop of Jackson told the bishop of Chimbote about Madden’s past abuse and his suspension.

Madden himself admits that he can’t work in the United States because of the US Conference of Catholic Bishops’ “zero tolerance policy” on child abuse in the church. Last year, Pope Francis sent a letter to every Catholic bishop on earth pledging the same zero-tolerance policy across the church.

So isn’t Chimbote’s position on Madden a violation of the pope’s zero-tolerance directive? Doesn’t it show that different rules apply in the US and Peru?

“No, no, no. You can’t say that,” Rodriguez said. “If there were any complaints against him here, then we would sanction him. But there haven’t been any complaints.”