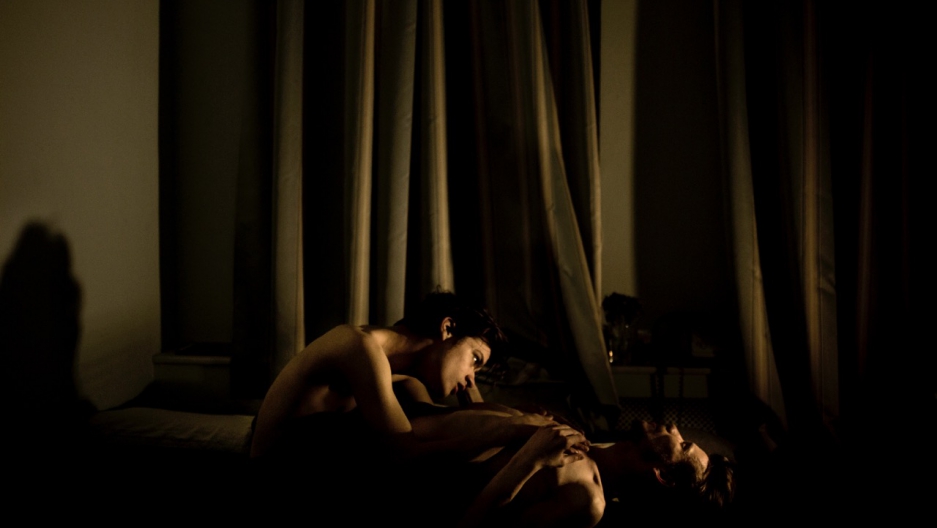 In Russia’s gay rights battleground, St. Petersburg has long been Ground Zero — and with good reason. The city was an early adopter of the anti-gay "propaganda” restrictions that have gone on to become federal law across Russia. It’s all part of an effort by the Kremlin to promote Russia as a bastion for “traditional values” against what it argues are Western liberal excesses.

A few years ago, Mads Nissen, a Danish photographer based in Copenhagen, started a project documenting homophobia in Russia.

He says that while he attended LGBT rallies, and photographed the violence and injustice surrounding Russia’s anti-gay law, his project was missing one thing — love.

“So I started looking for that. Simply, a picture of love,” Mads says.

And during that search for a picture of love, he met Jon and Alex. Alex is 27, and works as a software engineer in St. Petersburg. His boyfriend, Jon, is 23, and the first to admit that Jon is not his real Russian name.

It was one particular photograph that Nissen took of the two of them — an embrace in Alex’s St. Petersburg apartment —  that got them all some notoriety.

And for Jon and Alex, it meant being cast as poster boys for Russia’s LGBT rights movement — whether they were ready for it or not.

Alex says just before news of the photo award broke online, he’d come out to his family as bisexual — in other words, good timing.

“My first thought was that I was very lucky I had done that before. It would be [a] surprise, and probably not a good surprise,” he says.

In fact, until just a few years ago, Alex says he didn’t consider himself the activist type. That all changed with a visit to an LGBT meet-up at a coffee shop in St. Petersburg in December 2013.

“I found the place and the environment I feel very good in,” Alex says.

He also met Jon at the coffeehouse. Jon was already out to his family, though he says his father is still coming around to the idea.

“Just the other day I called him and he asked ‘how’s your ‘community’ doing?’ I mean he knows but for a long time he pretended not to,” Jon says.

Meanwhile, Jon was noticing something about that community in the wake of Russia’s law that banned gay propaganda to minors — something he hadn’t seen before. The law promoted bigotry, but Jon says it also was forcing a new public debate on LGBT issues.

“Before that, the LGBT community had no voice at all. But people started thinking about it — are they for the law? Are they against it? Are they unsure? “

Alex says that debate only intensified after last summer’s US Supreme Court decision to legalize same-sex marriage in the US.

“Probably the most important question was how it could affect Russian government and their relation to LGBT, and would they continue to do everything to make our lives even more difficult,” Alex says.

That’s when something kind of weird happened.

A Russian state TV news anchor, Dmitri Kiselev, who’s known for his aggressively homophobic — and pro-Kremlin — views, ran a segment about the US Supreme Court decision. That wasn’t surprising, but Kiselev’s fairly measured response was.

Kiselev told viewers to face it, that the LGBT community was here to stay. He didn’t support same-sex marriage, but he said that Russia might consider civil unions. And he went on to say that ultimately, the issue was not about sex, but love.

Jon says when he watched the report, his head nearly hit the floor.

“I wanted to say ‘we’ve broken Kiselev! Bring on the next homophobe!’ Because in our world it was just something impossible,” he says.

Both Jon and Alex know this doesn’t necessarily mean change. This was, after all, just one news anchor and one broadcast.

The gay propaganda law is still on the books. And they can both point to countless examples of harassment and violence. Earlier this year, thugs with baseball bats broke into a local LGBT gathering. The ensuing fight left a friend blind in one eye.

Moreover, a recent poll found that more more than half of Russians surveyed think gay people should be either "liquidated" or isolated from society.

But despite all that, Jon says this feels like a moment for the LGBT community here.

“When the anti-gay law appeared, we got people’s attention. Now, we need to take that attention and turn it into influence,” he says. “The situation is getting better. I want to believe that.”

If that sounds strange, Alex can point to more concrete things: growing numbers at LGBT rallies, at least in St. Petersburg; slowly improving police protection; and, thanks in part to Nissen’s photo, Alex’s own, now very public commitment to the cause.

“I want to be open. I like that it was coming out to the whole world. I like that,” he says.

Jon and Alex (r) in St. Petersburg with the award-winning photo.

And as for Mads Nissen, he’s taken his photo series of homophobia in Russia across the globe. He always includes that picture of that embrace between Jon and Alex.

“Ultimately, this is story is not about politics or religion, but about two people wanting each other, the desire of another person. I think that’s something we can all relate to.”

His award-winning photo of Jon and Alex is on display in St. Petersburg as part of the World Press Photo tour exhibit through the end of October.