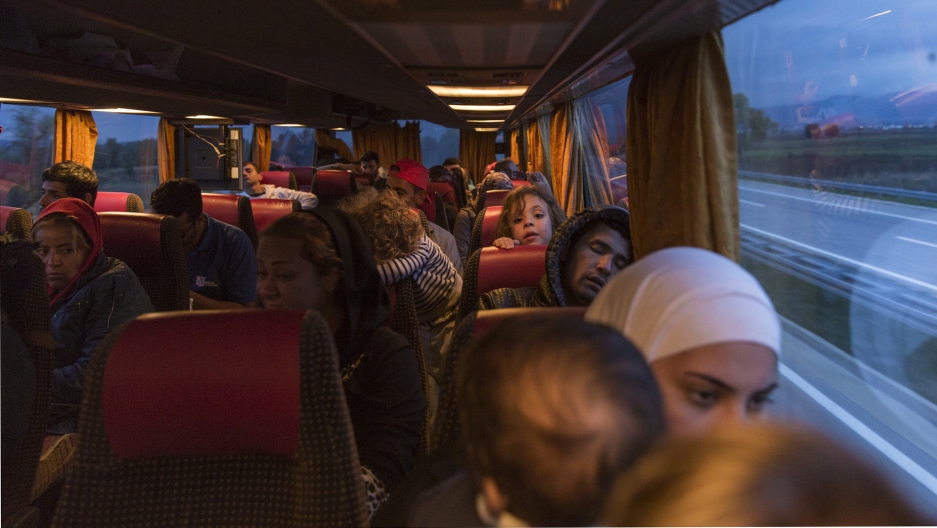 Refugees on a private bus in Serbia en route to the border with Croatia.

The main street through the small border town of Preshevo, Serbia, has become a busy thoroughfare. Cafes have signs in Arabic and English taped on top of the original Serbian, advertising Halal food, Turkish tea, free WiFi and mobile phone charging.

But the biggest “new” business in this otherwise sleepy town is the buses.

From Turkey to Germany, refugees and migrants from the Middle East and Africa need to cross seven international borders. And each country has different rules about what kind of transport the travellers are allowed and NOT allowed to take. In Macedonia, people are required to take government trains. But in Serbia, the railroads are nearly all off limits. So now private buses make the seven-hour trip north to the border with Croatia. It's become a big business.

Alex is one of those profiting from the new enterprise. He asked that we not use his real name because he didn’t have permission to speak to the press. Alex and his uncles now work with one of the bus companies here in Serbia. They hadn't been in the transport business before thousands of migrants and refugees began crossing into Serbia from Macedonia. But Alex and his uncles knew a handful of experienced drivers and where they could find buses to rent.

Alex says for him, it's about trying to make a living in Serbia's struggling economy. He charges a flat fare of 35 euros per seat (about $40) — no exceptions. And he admits that can be difficult

“When I see small children,” he says, “I'm feeling so bad because I have children."

There are lots of children on the bus that we're riding across Serbia. A few hours into the journey, the floor of the bus is full of sleeping children. For many of the people here, this is the first warm, dry place they've had to rest in days.

When we take a 30-minute break at a rest stop along the way, a Syrian man named Haytham smokes cigarettes with some friends in front of the bus, while his wife and children sleep inside.

Haytham says bus companies like this one have actually made the journey across Europe cheaper. He says people used to have to pay a smuggler to transport them through the Balkans to their final destination — usually Germany or Sweden — an expensive and often dangerous leg. Just a year ago, Haytham's cousin paid nearly $9,000 to be smuggled into Europe. Now, the price is closer to $1,500 — $6,000 for a family of four. Haytham says that’s one reason more and more people are finally deciding to leave their homes and come here.

When the leg of this trip ends at Serbia's border with Croatia, people gather up their belongings from the bus and walk to yet another border. Another set of buses — these run by the Croatian government — will take families to trains bound for Slovenia.