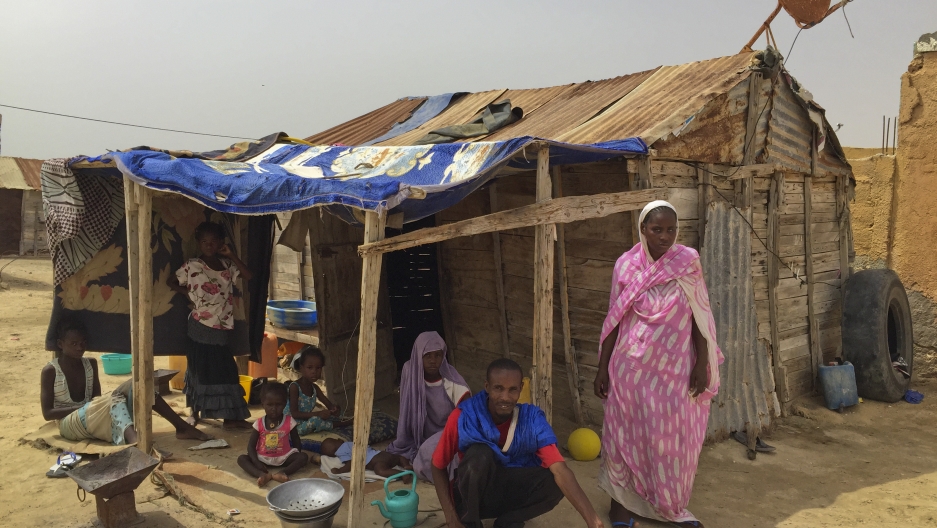 Mbarka Mint Essatim (front right, standing), with her husband and children at their home on the outskirts of Nouakchott, Mauritania. Essatim was saved from slavery by her husband, who worked as her former owner's driver.
Credit: Erin Conway-Smith
Share

NOAUKCHOTT, Mauritania — Mbarka Mint Essatim wondered why the other girls didn’t have to scrub the dishes or sweep the floors clean of Sahara sand.

At family meals, she waited until the others were finished, and then ate the leftovers alone. If she was slow with the washing up, they beat her. She slept on a mat outside the house, and didn’t go to school.

This was the only life Essatim knew. The family, part of Mauritania’s Arab-Berber minority known as “White Moors," would tell people that she was their child. But as Essatim grew older, her "uncle" began touching her inappropriately.

“I was very confused,” she remembers, her eyes stuck in a thousand-yard stare. “I didn’t understand what I meant to him.”

One day, the man’s driver struck up a conversation with her. “He asked me, ‘What is your relationship with these Moors?’" Essatim recalls. "I said, this is the only family I know. And then he understood that I was a slave.”

In Mauritania, a vast, desert country straddling sub-Saharan Africa and the continent’s Arab north, anywhere from 4 to 20 percent of the population are slaves. There are few reliable statistics, so the exact figures are unclear. But even the lowest estimate makes Mauritania the country with the highest percentage of slaves in the world.

More from GlobalPost: Fishing for trouble in Mauritania

While slaves here aren’t physically chained, many remain imprisoned by deep psychological bonds, as well as crippling poverty. Some consider it a sacred duty to serve their masters, tending to the livestock or doing the housework with no pay. Others, like Essatim, grow up knowing nothing else. Anti-slavery activists say that freeing their minds is one of the toughest challenges.

Boubacar Messaoud, who has been fighting the problem for decades with his group SOS Slaves, compares slavery in Mauritania to feudalism, with slaves like serfs toiling their master's land.

More from GlobalPost: Can Ethiopia stop a famine?

Others describe it as a caste system. Today's slaves, such as Essatim, are descendants of darker-skinned ancestors enslaved centuries ago by the lighter-skinned White Moors.

“Slavery has existed for centuries,” Messaoud says. “People say they are slaves by the will of God.”

The extent of the problem is denied by Mauritania’s government, and even by many Mauritanians. “People don’t recognize slavery,” he says. “Even the slaves deny the existence of their own slavery.” 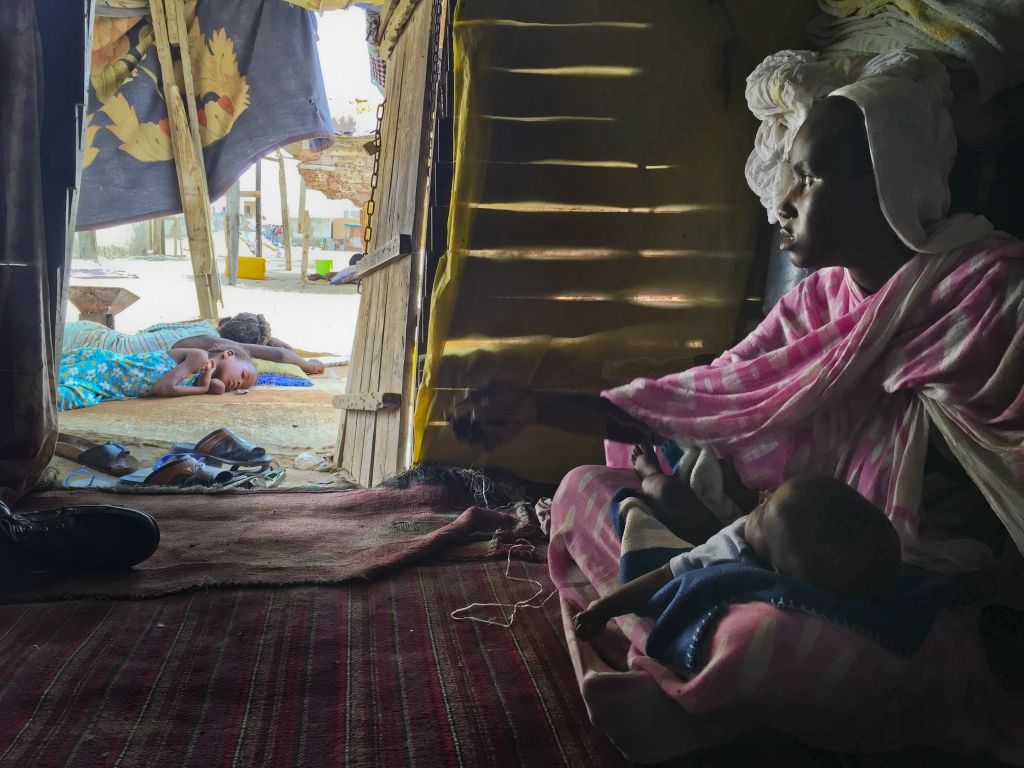 Mbarka Mint Essatim sits inside the one-room shack where she lives, while her children sleep outside.

Legally, there is some acknowledgment of the problem, but enforcement is rare. Slavery was abolished here in 1980, though it wasn’t a crime until 2007. And while a new law increases the jail sentences for slave owners, it is almost unheard of to be found guilty. Usually the charge is reclassified as a lesser offense, such as "unpaid labor."

While the Mauritanian government admits to “vestiges” of slavery, it says the issue is blown out of proportion.

“We have a slavery problem, but it is not as big as people outside perceive it to be,” says one state senator.

But even in Mauritania’s capital and biggest city, Nouakchott, the problem is visible.

Bilal Ould Salka, 33, lives in a squatter camp on an empty plot of land in a wealthy neighborhood here.

Salka lives with many others, cheek-by-jowl, in tents and shacks, who consider themselves runaway slaves: never officially freed by their masters.

Salka says that in his hometown, some 400 km away, he farmed wheat and beans. But it wasn’t his land, and his master would take a tenth of the harvest. When there was a drought, and Salka produced less food, the master would still take a tithe.

This is one of the main problems preventing change in Mauritania: Slave families have no right to land, though they may have been enslaved by the same family for generations.

This is one of the main problems preventing change in Mauritania: Slave families such as Salka’s have no right to land, though they may have been enslaved by the same family for generations.

Life in urban Nouakchott is tough. Salka often only eats one meal a day. If his children get sick, “they are in [the] hands of God.”

"I don't feel free,” he says. “How can we be free when we don't have a place to live, we don't have work, when you live with your children in these type of conditions?"

Messaoud says this is proof of psychological slavery: “For me, a slave who requests a document is still a slave,” he says. “Someone who asks for papers is still a slave in their mind.” 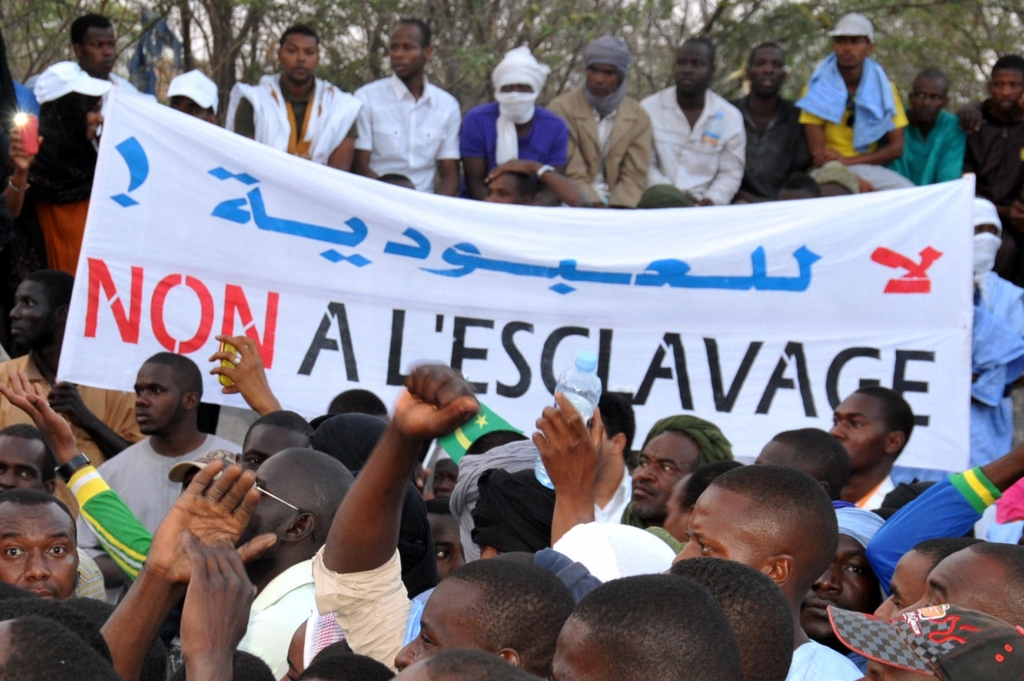 People hold a banner reading 'No to slavery' during a demonstration against discrimination in Nouakchott on April 29, 2015.

Essatim, who is now 27, has been free for four years. She is still confused by what happened to her as a child.

She has no real memory of life before she came to the house of the White Moors, just that she was around five years old. Her mother, also considered the property of that family, handed over Essatim when the master’s mother asked.

Essatim tells her story with brutal, detached detail: her master raped her repeatedly, starting before she was old enough to wear a traditional veil on her head. She fell pregnant with his child at age 14. And then the master’s eldest son raped her, too.

Anti-slavery activists say that it is considered normal for masters to have sex with their slaves — so ordinary, in fact, that the wife of the master might not even be jealous, because slaves aren’t viewed as people.

But Essatim’s life took a fortunate turn after she met her master’s driver, Moktar, who is now her husband.

He helped her realize she was enslaved, and to find her mother, whom she hadn't seen since age five. With the help of a group called the Initiative for the Resurgence of the Abolitionist Movement — known by the French acronym, IRA — he secured her freedom.

The tougher part was freeing her children. The master’s family at first wouldn’t let Essatim take them, considering them to be their property. When the case went to court, Essatim's mother turned against her, telling a judge that she was crazy and shouldn’t have her children back.

Hamady Lehbouss, a campaigner with IRA, said that it is common for the family members of slaves to side with their masters. “They think it’s shameful if the master has a problem because of them,” he says. “Even if it costs them their daughter.”

Essatim's life is better now — nobody beats her. But she says that her master and his family stole her future: she was never educated, and still can’t read or write. She also never learned how to pray.

Her six children don’t go to school, and the family lives in a one-room wooden hut in one of the poorest parts of Nouakchott. Essatim’s husband lost his steady job for helping to free her.

“These are questions I ask myself. I hope to get answers.”