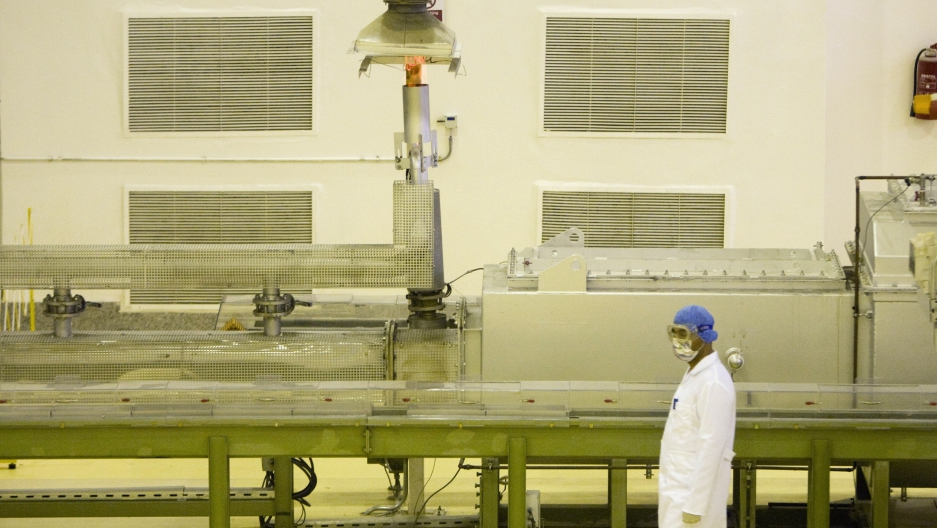 A worker works at the fuel manufacturing plant at the Isfahan Uranium Conversion Facility 273 miles south of Tehran April 9, 2009.

Sunday marked 90 days since the United Nations Security Council endorsed the historic agreement between Iran and the US, Britain, France, Germany, Russia and China).

It was “Adoption Day” — the day when Iran was scheduled to dramatically scale back its nuclear program. Iran now has to dismantle around 15,000 centrifuges, surrender or dilute much of its enriched nuclear fuel stocks and turn one of its nuclear plants into a research center.

President Barack Obama acknowledged the day in a memo to the secretaries of state, treasury, commerce and energy.

“Today marks an important milestone toward preventing Iran from obtaining a nuclear weapon and ensuring its nuclear program is exclusively peaceful going forward,” he said. “I hereby direct you to take all necessary steps to give effect to the US commitments with respect to the sanctions described in [the Iran deal].”

Gary Samore, executive director for research at Harvard University’s Belfer Center, says the length of the process depends on what Iran wants to do in the future. Samore says the deal allows Iran to retain all of its existing centrifuges but they have to be removed, dismantled and stored under inspections of the International Atomic Energy Agency’s supervision.

“If Iran wants to preserve the ability to reinstall the centrifuges if the agreement breaks down at some point in the future, they’ll need to be very careful about how they remove them and disassemble them,” he says. If it wants to race towards easing of sanctions, “they can do a quick and dirty job and that will save them a lot of time.”

The US and other Western powers have promised Iran sanctions relief once the dismantling has been completed.

But just like Iran has the ability to reinstall the centrifuges if the deal fails, the US and other Western powers have the capability to re-impose the sanctions.

Besides the centrifuges, Iran has to deal with its enriched uranium.

“One option is to dilute it so that it’s returned to natural uranium, or they can ship the bulk of it out, most likely to Russia,” says Samore.

It’s not yet clear which path Iran will take, but Samore thinks it will be a fairly straightforward process and it should not take long.

Because most of Iran’s centrifuges have never been used, they aren't contaminated with low-enriched uranium. That means no significant safety or environmental concerns.

Samore sees this as a moment of success for setting back Iran’s nuclear program, although he cautions that the West needs to continue monitoring the situation very closely.

“The big question will be whether the agreement can survive in the long term,” he says.