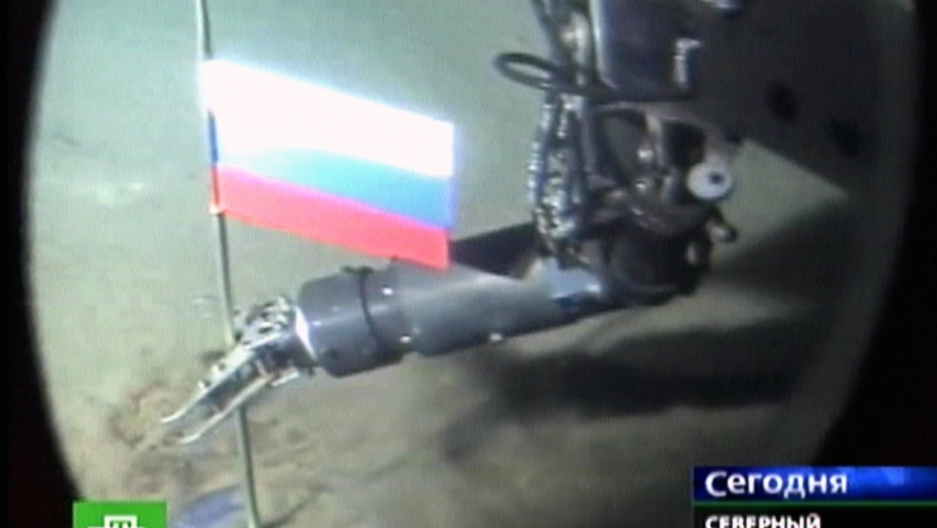 On Aug. 2 2007, a Russian submarine staked the country's flag in the seabed of Arctic Ocean, 2.5 miles beneath the North Pole.
Share

Editor's note: This story is updated with news that Russia's built a giant new military base on a large island in the northern Arctic.

STAVANGER, Norway — The Arctic ice floes are a world away from Syria's fiery deserts or the plains of eastern Ukraine. Yet the High North risks becoming another theater of tension between Russia and the West as global warming frees up resource riches.

"The unlocking of the region’s enormous economic potential could ... have significant geopolitical implications," warns a report presented to lawmakers and senior Western security officials last week. It highlighted dangers of "competition and perhaps even confrontation" in the region.

"The Arctic is a harsh environment; it should not become harsher due to increased military and resource competition," said the report prepared for NATO's Parliamentary Assembly.

More from GlobalPost: 71 percent of Russians believe the US is the world’s bad guy

Russia has been cranking up its military presence in the Arctic as relations with the West worsen over Ukraine. Now with Russia striking targets inside Syria — many of them held by US-friendly rebels — those tensions are even higher.

Moscow is about to complete a giant military base on the large Arctic island of Alexandra Land that can house 150 soldiers for 18 months, the Defense Ministry said Tuesday.

The country aims to open 10 new airbases in the region by the end of this year in addition to four that are already operational. Last December, Russia set up a new Arctic strategic command and began revamping Cold War-era naval, army and air defense installations across its vast northern region.

A motorized infantry brigade was stationed close to the border with Finland; another brigade will be based just eight miles from Norway's northeast frontier. The NATO PA report says Russia is increasing its special forces presence in the region by more than 30 percent and stepping up Arctic warfare training.

A land grab for polar territory is underway among Russia and the other Arctic seaboard nations — Norway, Denmark, Canada and the United States.

In March, Russia mobilized its powerful Northern Fleet for exercises that deployed 45,000 troops, 41 ships and 110 aircraft. The war games dwarfed maneuvers by 5,000 Norwegian troops on the other side of the border.

Northern neighbors are not so sure.

"We see that the Russian armed forces are undergoing a significant modernization ... we are seeing much greater capability for strategic mobility," Norway's Prime Minister Erna Solberg said Monday.

"We do not consider Russia to be a direct threat to Norway or Norwegian interests, but the strategic changes in the security environment in our part of the world force us to think differently," she told a security conference in Stavanger, the capital of Norway's $38 billion-a-year oil and gas industry.

More from GlobalPost: This is what the Russians are saying about Moscow’s airstrikes in Syria

Many experts warn rivalry in the polar region is increasing as climate change makes it easier to reach the huge natural resources under the ice cap, and to free up sea lanes through the Arctic Ocean.

The Arctic holds an estimated 22 percent of the world’s undiscovered conventional oil and natural gas reserves. It also contains rare earth metals and other valuable minerals. With the icecap and permafrost melting at accelerated rates, they are becoming more readily available.

A land grab for polar territory is underway among Russia and the other Arctic seaboard nations — Norway, Denmark, Canada and the United States, who are all members of the NATO alliance. In August, Moscow renewed claims to almost half a million square miles stretching up to the North Pole.

Norwegian officials hope the race for Arctic resources will be peaceful. They note that most of the mineral riches are in areas already allocated, and point to a tradition of nations resolving territorial issues peacefully there — even during the Cold War.

However, Norway's faith in Arctic cooperation has been shaken by President Vladimir Putin's unpredictable foreign policy.

They haven’t been reassured by stunts like using a submarine to plant a Russian flag on the seabed under the North Pole in 2007; strategic bomber incursions close to Norwegian air space; or the unannounced landing on Norway's Svalbard Islands by Putin aide Dmitry Rogozin, in April, in violation of a European travel ban imposed over his role in destabilizing Ukraine.

"The Arctic is a Russian Mecca," Rogozin, a deputy prime minister, tweeted in response to Norwegian complaints. A picture taken on April 16, 2015 shows an icebreaker in the Kara Sea, where Russia, China and France are aiming to extract and liquefy gas from the Yuzhno-Tambeyskoye gas field, scheduled to start production in 2017.

"A few years back, Russian Arctic rhetoric was characterized by terms such as peaceful development, low tension and low military activity,” says Lt. Gen Kjell Grandhagen, director of the  Norwegian Intelligence Service. "Now, Russian leaders ... are increasingly referring to the need for ramping up military activity in the High North."

Grandhagen told GlobalPost that Russian actions are becoming increasingly difficult to forecast as the Kremlin pursues an outsized foreign policy agenda to cover for its economic weakness and dilute potential for internal unrest.

"They want to be a major global power but with a limited ability to do it, that makes them more unpredictable," Grandhagen said. "It puts an enormous pressure on the Russian leadership to deliver something to the Russian public."

Norway is stepping up military spending in response.

The government last week asked parliament for a 9.8 percent increase in the defense budget next year. It wants to spend over a quarter of the budget on new equipment like high-tech F-35 stealth fighter planes and powerful anti-ship missiles.

"The highways of the Arctic are paved by icebreakers. Right now, the Russians have superhighways and we have dirt roads with potholes."

A 25 percent increase in intelligence spending is also planned.

Some NATO allies oppose further militarization of the High North, fearing an Arctic arms race. The Norwegians argue that Western allies must prepare for the worst.

"This area will be highly relevant in any potential crisis or conflict involving Russia," Defense Minister Ine Eriksen Soreide told lawmakers from the 28 NATO nations gathered in Stavanger.

"Given the strategic importance of Russian capabilities in the High North, we could potentially face a resurrected threat to the sea lines of communication across the Atlantic," she warned. "We need to bolster capacities."

That concern isn't limited to Europe.

US President Barack Obama has faced calls to beef up Arctic defenses, particularly from Alaska.

On a visit to the state last month, Obama backed calls for the US Coast Guard to acquire more icebreakers — powerful ships able to cut though Arctic ice to clear the way for other vessels.

Currently the United States has just two such ships compared to a Russian fleet that already stands at 41, with 11 more on the way.

"The highways of the Arctic are paved by icebreakers," Alaska Senator Dan Sullivan told reporters during Obama's visit. "Right now, the Russians have superhighways and we have dirt roads with potholes."

"We are entering a new era of Arctic security," said Kristine Offerdal, an expert at the Norwegian Institute for Defense Studies. "The worst case scenario is becoming increasingly worse."