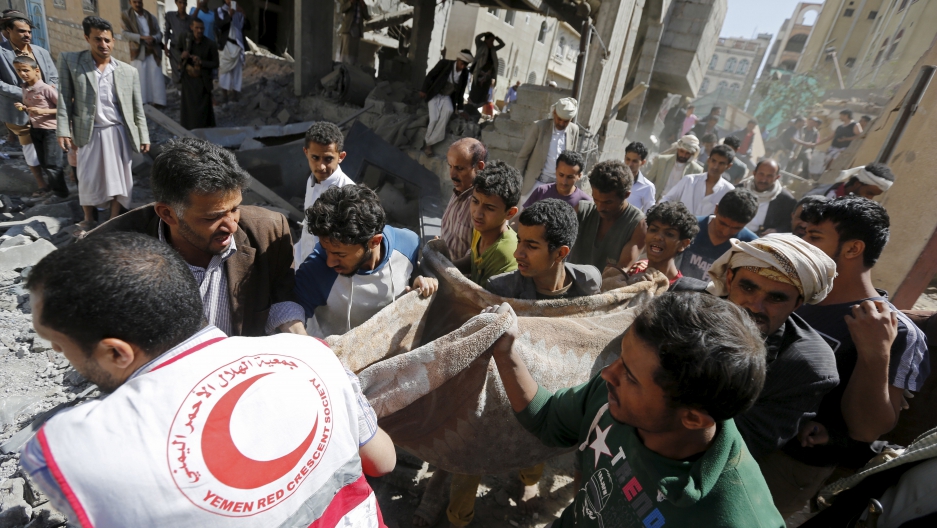 Thirteen liberal legislators have put President Barack Obama on the spot for his support of Saudi Arabia’s unchecked war in Yemen. The Saudi-led coalition has been guided by US intelligence, flying American fighter jets and dropping US-made bombs.

A Human Rights Watch researcher has put the death toll from the incursion at 2,355 civilians since March.

Michigan Rep. Debbie Dingel and her colleagues reminded the president in a letter last week that Saudi Arabia, America’s strongest Arab ally and best weapons customer is behaving badly in Yemen, and could be dragging the US into a war crimes scandal. “With this level of active involvement in the campaign,” the letter reads, “we are concerned that some overseas may hold the United States responsible for any civilian casualties resulting from the bombing.”

Many Yemenis already hold America — and the UK — responsible for Saudi actions.

Saudi Arabia is a war criminal in Yemen, its crimes directly aided by US & UK weapons & military assistance. https://t.co/aPZI79E0Bf

Yemenis learned of this most recent legislative call to Obama from The Yemen Post, an English language website in Sanaa that tweeted out a picture of the letter.

In Yemen the civil war is inescapable. Street fighting between the insurgent group known as the Houthis and forces loyal to the president in exile, Abdu Rabbu Mansour Hadi, had already been killing non-combatants when on March 26 Saudi Arabia ordered the first airstrikes against the opponents of President Hadi.  “Quite a large number of the strikes in the context of the Saudi-led coalition air campaign have been against legitimate targets: military objectives,” says Amnesty International’s lead investigator in the region, Donatella Rovera. “But a lot either directly targeted civilians or were so reckless and indiscriminate that they ended up killing and injuring civilians and destroying civilian homes and civilian infrastructure.”

Saudi Arabia is the US weapons industry’s best customer, signing $90 billion in arms deals between 2010 and 2014. As with all of America’s foreign weapons sales programs, the Saudi Arabian arms deals are intended to shore up the kingdom’s military so that it can handle is own defense needs without direct US involvement. But as Seth Binder of the Center for International Policy notes, “continued US assistance to the Saudi-led coalition continues to be extremely problematic.” Others are now starting to notice, Binder says. "Just this week, articles in Foreign Policy among other sources have raised concerns about the complicity of the US in possible war crimes committed by the coalition. In addition, recent articles in The New York Times and The Washington Post have highlighted the recent failures of US train and equip programs."

Amnesty’s Rovera, who has interviewed Yemeni eyewitnesses and victims and collected evidence at sites where civilians have been killed, says “if we look at the role that the United States may have played in all of this, there is the supply of weapons. Pretty much all of the remains of the weapons and munitions that I have found on the ground … were US designed or US produced.”

Pic of the house where Saudi regime killed last night civilians in a wedding party in Senban area of Dhamar. #Yemen pic.twitter.com/NAmg9dG7Th

These grooms never made it 2the end of wedding as #Saudi airstrikes trgtd the party killing scors in #Yemen #اليمن pic.twitter.com/ANfgSLpbgo

The letter to Obama came partly in response to the wedding attacks, but support for such a move had already been building. Massachusetts Rep. Jim McGovern, one of the signators, said “the letter clearly states that the deadly strikes against two weddings, barely a week apart, were only the latest in a deadly and deliberate-seeming strategy of attacks against civilian targets.”

Amnesty's Rovera welcomed the letter. “Any effort from wherever it comes that seeks to draw attention to the loss of civilian lives and that encourages a much better and much needed oversight over the behavior of coalition forces is… a welcome development because at the moment the coalition forces' behavior does not appear to be under any sort of scrutiny.”

Congressman McGovern, who last summer raised concerns about coalition misuse of US-made cluster bombs in the war, believes more scrutiny of the Saudi-led air campaign is overdue. “I think the issue here is whether there has been a violation of US laws that prohibit the use of US-provided weapons against civilians or in an indiscriminate fashion where significant civilian casualties might occur,” McGovern wrote in an email to PRI.org. “And if so, then we need to ensure that our weapons are not used in such situations.”

When foreign governments purchase weapons from the United States, they do so under a set of rules spelled out in legislation introduced by Vermont Senator Patrick Leahy.  The so-called “Leahy Law” prevents the United States from providing training or equipment to foreign countries whose forces violate human rights.

That could apply to pending sales of US-made precision guided bombs requested by the Saudis in August.

Congressman McGovern is cognizant of both the war crimes concerns and the pending weapons sale. He says he would like to see “a condemnation of how these military operations were carried out, a reiteration of the agreement by Saudi Arabia when those weapons were provided or purchased, and the announcement that further US military aid or weapons will not be provided or sold to Saudi Arabia, or at a minimum, to those units most responsible for the abuses.”

CIP’s Seth Binder says the letter to the president is a milestone. “It is late, but sends an important message.” He adds, “Congress can take additional steps. They can stop weapons sales to coalition members or at the very least draw attention to the sales.”

The letter to the president underscored the urgency of Yemen's humanitarian crisis. “Limiting civilian casualties ... will only alleviate part of the heartbreaking humanitarian catastrophe in Yemen. After a recent visit to Yemen, the head of the International Committee of the Red Cross, Peter Maurer, declared: "Yemen after five months looks like Syria after five years."

As of this writing, the White House has not issued a formal response.