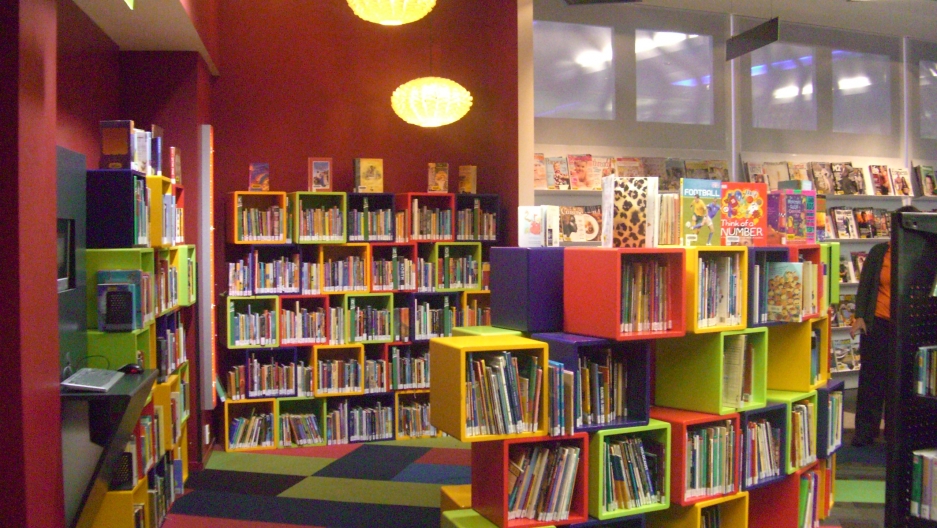 A library in Auckland, New Zealand where the young adult novel Into the River is now allowed back on the shelves.

In New Zealand access to the award-winning young adult novel Into the River has been restricted on and off ever since it was published.

The book tells the story of a Maori teen, Te Arepa Santos, who is awarded a scholarship to a prestigious boarding school in Auckland, New Zealand. Te Arepa navigates the social world of this boarding school-- enduring bullies, making friends, discovering romance, and working to understand how his Maori identity fits in. The book was lauded across the country for it's appeal to teen boys who don't enjoy reading.

At the at the 2013 New Zealand Post Children's Book Awards Into the River won the Margaret Mahy Book of the Year and the Best Young Adult Fiction title.

Shortly thereafter complaints were made by the public and an application was filed with the New Zealand Classification Office to classify the book as adult, and thereby restrict access.

"What's caused the controversy is I've told it in a very clear and literal way," the author of the novel, Ted Dawe, told PRI. "I've chosen very much the way boys speak. I've had a lot of experience with that because I've taught in the classroom for 30-odd years. I've got some quite clear sexual descriptions, there's quite a lot of swearing in the book, and of course the boys get up to all kinds of tricks, and some of them are not so good. I guess those are the sort of things that prompted people to take exception to it."

This application was rare. Under New Zealand's Films, Videos, and Publications Classification Act of 1993, books are not regularly classified the way films are. Instead books are only classified when submitted for review by a member of the public or governmental organization.

On September 11, 2013 the Classification Office rated the book M, or unrestricted, stating that the book did not meet the required level for resctriction as it did not contain material that was "harmful to society."

The advocacy group Family First appealed this decision to the Film and Literature Board of Review, complaining that descriptions of sex, drinking, and involvement with drugs and violence were not age-appropriate. The Board of Review rated it R14 for "parental advisory" and "explicit content", the first time any book had received such a classification under the current law. They advised that Dawe put a notice that the book was for older readers on the cover, and he complied.

"The controversy I feel was very unfair from the beginning." Stated Dawe, "Had the book not won the premier book award in New Zealand in its particular year I think it would have passed without mention. But when it won this award a whole different readership came to pick it up and look at it. And they didn't like what they saw. And they started making noises about it. And the next thing a fairly fundamentalist-extreme family-focused group came to challenge it. They felt it was not the sort of book that kids should be read it at all."

After three years the Classification Office can re-review the rating of a book if there are special circumstances. In March 2015 Auckland Libraries applied for such a review, stating that libraries around New Zealand believed the classification should be changed and "had demonstrated a willingness and ability to manage access to the book in ways that would mitigate any potential harm from the age restriction being removed."

Dawe has another novel, 2003's Thunder Road, which was taught in schools and espeically used by teachers trying to entice boys to read. Many teachers and librarians were hoping to similary include Into the River in their curriculum.

Upon review the Classification Office once again marked Into the River as Unrestricted. And Family First again appealed this decision to Board of Review.

Family First also applied for an Interim Restriction Order on the book until the Board decided on a classification, and this was granted. This order took the book off shelves — it became illegal to sell or display in public.

But this week the Board of Review looked at the novel again and classified it finally as Unrestricted. "I feel that this judgement that came down on Thursday was the final judgment, and now the book will continue to do its job in an unmolested fashion." said Dawe.

"One of the ironic things about this whole business is that the people who were trying to suppress the book have given it an enormous audience." explained Dawe, "The book's now going to be published in America, it's doing the rounds at the Frankfurt Book Fair, the audible version is being prepared, there's someone talking about film rights. The book has really taken off internationally and of course nationally as well. There won't be that business about the book being for caution anymore in New Zealand that there was when it was taken off the libarary shevles throughout the country."

Dawe is currently finishing up a sequel to Into the River, and says that ultimately he will publish a trilogy about Te Arepa Santos.

"It's been an interesting exercise." reflected Dawe. "It's certainly polarized this country, New Zealand. It's become a talking point in a country where we don't spend a lot of time talking about books, we spend much more time talking about rugby. For about a month now its been the conversation in many many different spheres. In some ways it's found its way permanently into ... New Zealand culture."