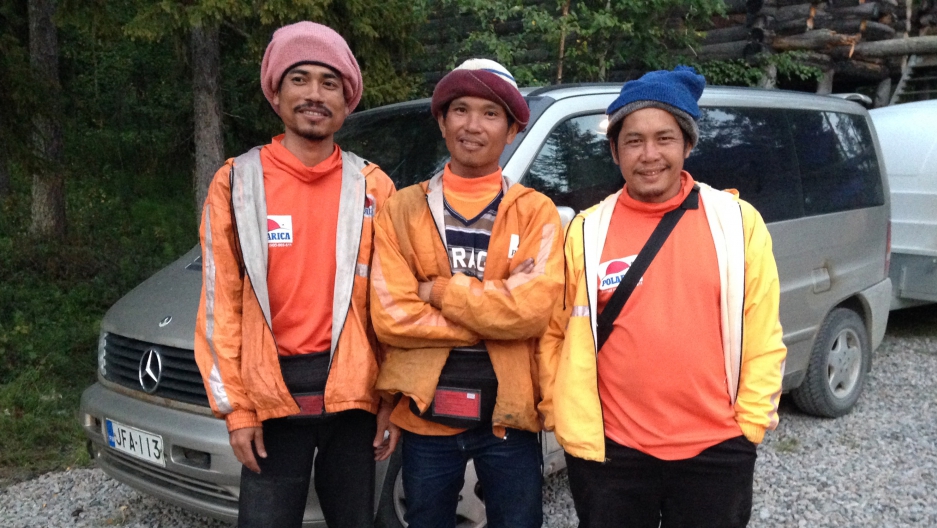 Berry pickers in Finnish Lapland from the province of Ubon Ratchathani in northeast Thailand. The balaclavas keep the gnats, biting flies, and mosquitoes away.

In northern Finland, some 15 miles inside the Arctic Circle, a half-dozen Thai men walk through the marshy, mossy forest, eyes to the ground. They’re dressed like colorful bank robbers, with knitted facemasks to keep the biting flies and mosquitoes away.

With each scoop through the moss comes a thump of berries hitting the bottom of the 20-gallon buckets they lug on their backs — cloudberries, bilberries, and lingonberries.

You’ve probably never heard of these berries outside the cafeteria line at Ikea, but they are huge in some parts of the world.

“The cloudberry is our gold,” says Kristo, referring to the rarest of the berries, which looks like a yellow raspberry.

The berries are popular in Europe, but also increasingly in East Asia, where they go into cosmetics and pharmaceuticals. But it’s hard to meet demand, because the plants haven’t been domesticated — they only grow wild. And the places they grow best are the Arctic upper reaches of Sweden, Finland, and Norway. 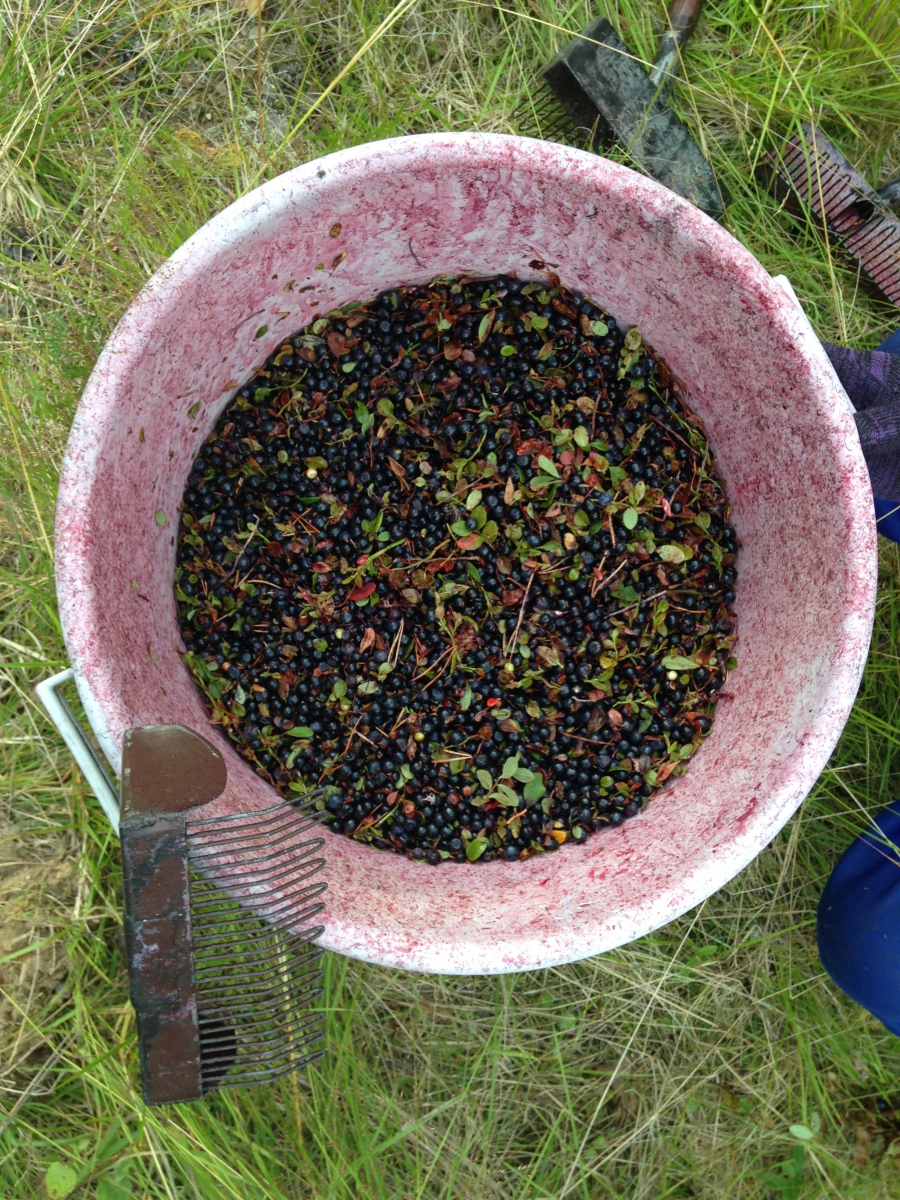 “Ten, 15 years ago we were inviting pickers from Russia, Belarus, Ukraine — Baltic countries,” Kristo says. “But now we are not inviting anyone but Thai pickers.” Why? Because, he says, “Thai pickers are really coming here to earn money. Not drinking, not anything else. We had that problem with old Soviet Union countries people.”

Kristo says all the big berry processing companies now depend on Thai pickers to bring in their raw material. Polarica alone recruits about 1,060 people from northeast Thailand — most of them farmers and fishermen.

This year, one of them was Arun Siri, from the Ubon Ratchathani province in Thailand. Back in June he planted his rice crops, said goodbye to his wife and two daughters, and took a plane to the place on Earth that is probably the least like his home.

Speaking through a translator who works for the company, Siri says the first thing he noticed when he got off the plane in Finland “was the air — very fresh and very good air.” On the way north, he was thinking, “How can I make money to support my family to make my wife and my children live well?”

Siri is 42, and this is his eighth time in Finland. Now he oversees one of Polarica’s berry picking camps. Siri says he can take home $3,000-$5,000 some years. That’s about quadruple what he’d make at home fishing and farming.

But there were some cultural adjustments to make, and rules to learn. Don’t drive on snowmobile routes. Wear bright colors, because it’s hunting season. Don’t enter the border zone with Russia, or you might have to get bailed out of jail. Expect to run into reindeer.

“I’m scared that the car is going to hit them because they walk on the road,” Siri says. 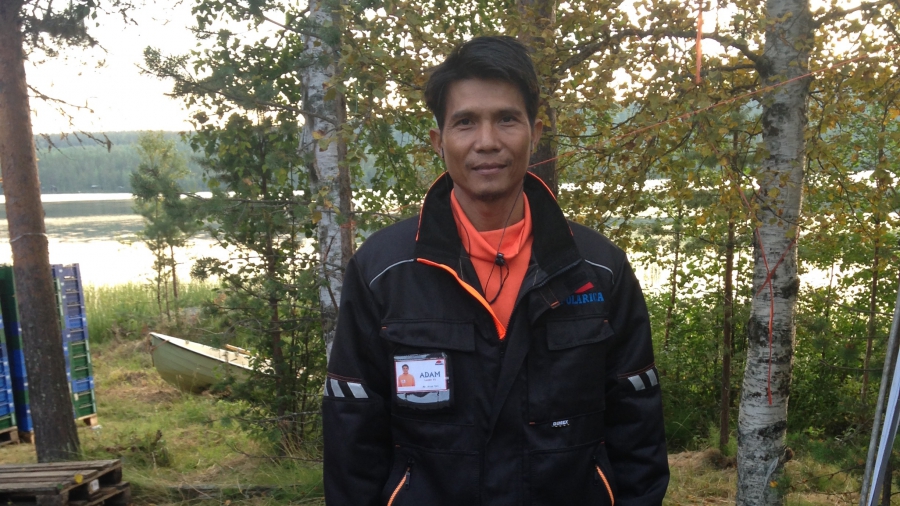 After eight summers of berry picking in Finnish Lapland, Arun Siri has learned to look out for things like reindeer on the road.

Most berry pickers stay in old schools or abandoned houses in tiny Arctic towns with dwindling populations. The one where Siri is living used to house vacationing hunters and fishermen.

At the end of the day, the smell of spicy pork and coconut carries through the woods, as the 90 berry pickers staying here unload crate after crate of bilberries, each one scattered with lichen, pine needles, and moss. They weigh them, tally up their earnings, and stack them in towers of crates to be picked up the next day.

The pickers work about 13 hours a day for three months. The crazy thing is no one hires them to do this. As Markku Wallin of the Finnish Ministry of Employment and the Economy explains, they’re considered “entrepreneurs.” That’s because they don’t come here on a work contract. They come to take advantage of a very Nordic thing, Everyman's right — a customary law that basically makes it a human right to pick wild fruit, mushrooms, and flowers.

To put it another way, “There’s no law which prevents you from picking berries,” says Wallin. “You can even pick berries on private property. It comes from the very, very long Finnish tradition.”

So, when Thai farmers go to Finland to pick berries, they’re paid for the weight of berries they bring in. The hope is they’ll earn enough to re-pay the loans they took out for airfare, visa fees, gas, food, and lodging.

“Thai women got married to Swedish men…in the north. And there were a lot of berries in the woods,” she says. One of them had a light bulb moment. “Actually, I talked to the woman who initiated this. She explained how she was out in the woods picking berries and she realized that this was money.”

First, she brought her family members over. But eventually, Hedberg explains, “it escalated so there were nodes of Thai women who imported workers on tourist visas.”

It mushroomed into an informal industry. Now, entire villages seem to relocate from northeast Thailand to rural Lapland each summer.

“They see it as a chance to escape from being farmers. Many workers actually use their income to pay for their families’ education,” Hedberg says.

But this industry is barely regulated, and in recent years there have been some problems, such as run-ins with territorial locals (which is why Polarica pickers now carry “emotion cards” — placards with emoticons on them and simple phrases in Thai and Finnish to communicate with locals they may encounter in the woods). But there have also been scathing reports by journalists and state investigators comparing the industry to “human trafficking” and “modern slavery.”

“There was a group which was treated in a way which I really could call a trafficking situation,” says Markku Wallin, who did a lengthy investigation for the Finnish Ministry of Employment and the Economy.

Berry pickers were given false promises of the wages they could make, were overworked, and didn’t have good housing or access to medical care.

“I think that situation woke people up about the problems,” he says. “It’s very necessary for us to get the berries out of the forest, so we need these people. But although they are coming to these conditions, let’s say, by their own will, it’s no reason to treat them badly,” Wallin says.

Even when the working conditions are good, the job can still be risky. Pickers have to take loans to pay for airfare and visa fees long before they know how big the harvest — or how volatile the fruit prices — may be.

“If the harvest is poor, or if they are for some reason not able to pick enough berries, then it means that they cannot get enough income to cover the expenses,” says Rainer Peltola, a senior researcher with the Finnish Natural Resources Center.

A few years ago, thousands came from Thailand to pick berries, and the forest just didn’t produce much. Hundreds of Thai workers returned home in debt. Partly due to the so-called “blueberry fiasco of 2009,” Sweden now requires that berry pickers have a work contract and minimum wage.

Still, according to a report from Chulalongkorn University in Thailand, people continue to fall through the regulatory cracks, especially if they’re recruited and hired by middlemen in Thailand.

“The industry is making money taking workers from the other part of the world and working excessive working hours for low payment — a work that no Swede would ever do,” Hedberg says, even with high unemployment in Sweden right now.

As with many cases for migrant laborers, there’s a fuzzy line between exploitation and opportunity. And yet, despite the problems in the last few years, people keep coming.

At the berry picking camp in Finnish Lapland, Thai workers explain what they plan to do with the money they make this year: build a house, buy a car, save up, pay for a child’s college education.

In addition to buying a car, Chakkrit Fangkam is particularly excited about something he found in the woods one day — an animal he describes as “like a horse and buffalo mixed together.”

It was a moose. And it left an eight-point antler that Fangkam plans to hang on his wall when he gets home later this month.