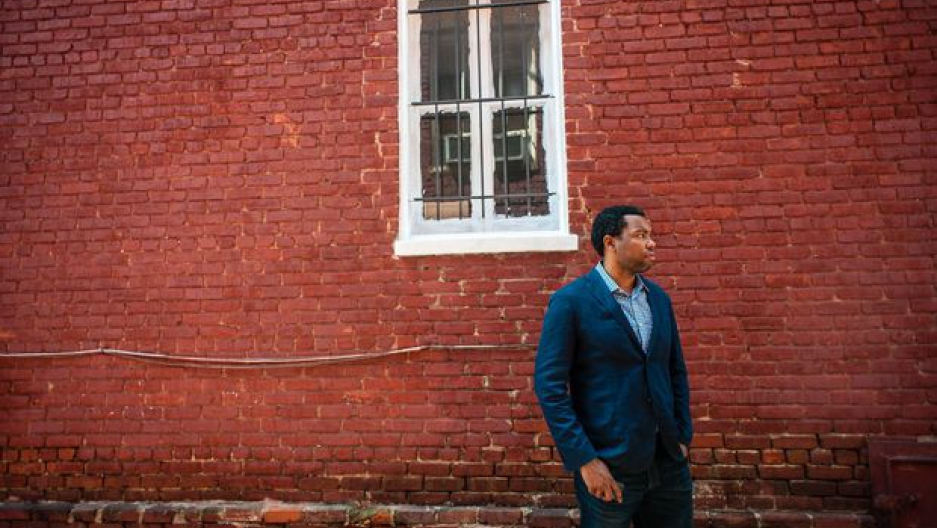 Time is the silent current. It holds us all. It ushers us through the mystery of how the present becomes the future, it lets the past slip away from us while making sure we weren't looking. The clock of time sometimes is the subtle tick-tock of language itself.

“One of the things I've noticed is my white privilege,” Sharon, a Takeaway listener in St. Louis, told me last week while we were broadcasting from Missouri. That was her response when she was asked what’s changed for her since the events of Ferguson mysteriously reset her clock.

“I don’t know that I was ever as cognizant of that as I should have been, but I see it as a prevalent part of my life — why I am who I am and what happened to me because I have had white privilege,” she said.

I was feeling that quiet, deep river of time this week as we ask, every way we can, what's happening now? Is something changing? Is our yoke of racial curse and self-imposed violence and brutality sculpted in the brilliant logic of educated thinkers with many more college degrees than I have? Could all that be crumbling?

“It comes as a great shock around the age of 5 or 6 or 7 to discover the flag to which you have pledged allegiance along with everybody else has not pledged allegiance to you,” James Baldwin, author of “The Fire Next Time,” said in 1965. “It comes as a great shock to discover that Gary Cooper killing off the Indians, when you were rooting for Gary Cooper, that the Indians were you.”

Baldwin was speaking with a seething quiet and an almost orchestral fury during that 1965 debate with William F. Buckley in Oxford, England. The proposition: Is the American Dream at the expense of the American Negro?

“The southern oligarchy, which has, until today, so much power in Washington and therefore some power in the world, was created by my labor and my sweat and the violation of my women and the murder of my children,” Baldwin said. “This, in the land of the free and the home of the brave. And no one can challenge that statement, it is a matter of historical record.”

With his proud, hard won, and cold steel erudition, Baldwin was confessing his humiliation for an America that was more preoccupied with the nuclear age and the space program than with the bigger matters of 1965: The social aftermath and downstream details of slavery. The white American quarterback of team privilege himself — William F. Buckley — stepped up confidently to defend the “American Dream.” You can tell from his smug look that he believed it needed no defending in the face of Baldwin, whom he likely viewed as a mildly interesting upstart.

“It is impossible, in my judgment, to deal with the indictment of Mr. Baldwin unless one is prepared to deal with him as a white man,” he said. “Unless one is prepared to say to him, ‘The fact that your skin is black is awfully irrelevant to the argument that you raise.’ Thus, Mr. Baldwin can write his book, ‘The Fire Next Time,’ in which he threatens America. He didn't, in writing that book, speak with the British accent that he used exclusively tonight; in which he threatened America with a necessity for us to jettison our entire civilization. The only thing that the white man has that the negro should want, he said, is power.”

Fast forward to 2015 and a grand hall at the New York City Public Library. I was there Tuesday when applause erupted for someone who’s not-so-hard-won erudition still necessitates a confession. Ta-Nehisi Coates, author of the book of the moment, “Between the World and Me,” talked about a fear James Baldwin would no doubt understand in a conversation with Khalil Gibran Muhammad of the Schomburg Center on Black Culture.

Coates said that his frustration that led him to write “Between the World and Me” came from loving James Baldwin, but feeling the world around him, and particularly whites, were stuck in the world of 1965.

Coates says African Americans experience violence, discrimination, and racism — all the familiar words you see and hear in the media — but he uses language to raise the ante, and declares them all to be forms and consequences of plunder.

“When I write an article for The Atlantic, it's never enough for me to win the argument logically — you gotta feel it,” he says. “You’re not just aiming at the head, you’re aiming at the heart. It’s not enough for somebody to read the article and say, ‘Wow, that was correct,’ and then forget about it. It’s better for the person to read the article and say, ‘I don’t know if that was correct,’ and go to bed thinking about it; wake up thinking about it; walk down the street thinking about it and turning it over and over again. You do that by being very choosy about your words and how you articulate things. Plunder was just a true word.”

It is with that word that Coates comes back to the very argument of James Baldwin. It was striking to see how little the argument and the circumstances of that argument have changed in 50 years.

“Normally we think about the period of people taking things from black people as ending with slavery,” he said. “It's even in how we talk about segregation. We don't think about folks being barred from the University of Mississippi as plunder, but it is. It's a public institution — they tax you for that and you have to obey the law and you have to hold up your end of the social contract, but you don’t get the same protections and privileges. That's plunder — that's a con.”

And then in a moment that I found astounding, Ta-Nehisi Coates, without realizing it, reaches back to William F. Buckley’s smug argument about missing white culture by focusing only on white power, and answers Buckley 50 years later by agreeing with him.

"Black identity has two really dominant things going on,” Coates said. “It has the race portion, which is put on us. People say we have defined you as part of a black race, and then you have a cultural and ethnic portion of it, a traditional portion, [and] a historic portion that defines how we talk, that defines a certain familiarity between me and a Khalil, for instance. That defines certain foods, certain music, a whole variety of folkways, and that really is what’s in the Howard University chapter. White identity is very different, and I'm willing to have a fight about this, but as far as I can tell, white identity is essentially an identity of power. It's just a racial identity."

Did people in this packed audience think anything has changed, that anything is changing? Is the language moving, helping, or morphing towards something that we someday call justice?

“No I don’t think so,” an audience member named Toni told me. “I think that it comes so much from what people’s background are, how they grew up and what sort of environment they grew up in and what their life experiences were. If they’ve always lived their lives in this bubble of everything being handed to or you're allowed to do whatever you want to do, then you never really see the other side of America.”

“Things are changing because of this moment and the last couple of years that have preceded it,” said a teacher named Nathan. “Particularly, I'm talking about the relationship between the African American community and the police. I think that's something this writer, Ta-Nehisi Coates, really addresses in his work. ”

At least one young man named Will was also optimistic.

“I would say that in certain quadrants and in certain circles, and certainly in conversations that I’ve had, we are at least having a conversation, which is different,” Will said.

Some had devastating answers.

But why should we use a middle aged, lefty crowd in Manhattan as a barometer anyway? It’s something, and it’s something that we would not have heard with this diverse and larger audience even two years ago.

Ta-Nehisi Coates is part of the change, and even the deeper change of this night. There was no William F. Buckley. No one missed him, and no one missed anyone like him. But 50 years later we all understand the American Dream a little bit better.

This story comes from The Takeaway, a PRI radio show that covers the national conversation.