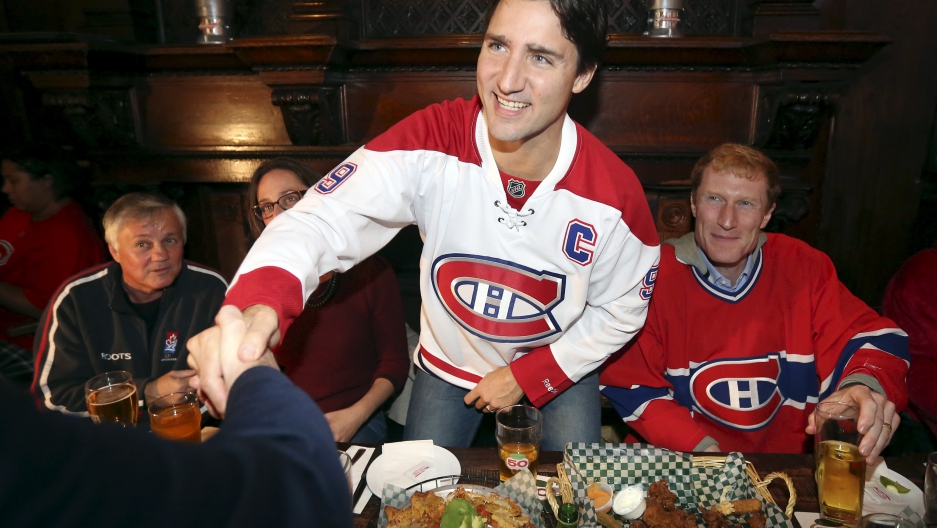 Canada's Liberal leader, Justin Trudeau, watching a Canadiens game in Montreal. He is one of the three candidates who may become Canada's leader after elections on Monday.

OK, Americans. Your friendly neighbor to the north is holding an important election on Oct. 19. It's not leading the headlines in the US, but there's a lot at stake for Canada. Satirist Rick Mercer of CBC's Rick Mercer Report tells us (almost) everything we need to know about the three people vying to be Canada's next prime minister, including "ridiculously photogenic" Liberal Party candidate Justin Trudeau.

Prime Minister Stephen Harper, leader of the Canada's Conservative Party, has been in power since 2006 and wants is seeking a rare fourth term. Mercer's take: "He's an old school conservative. He's basically George Bush, Jr. He claims to enjoy low deficits and small government except he runs a big government with big deficits."

Harper spent his time in office moving Canada to the right, lowering taxes, avoiding climate change legislation and supporting the oil industry against environmentalists. During the campaign, he pledged to ban civil servants from wearing a niqab, a full face veil worn by some Muslim women. Mercer says: "You know this should not be an issue. Two Canadian women who were about to take part in a Canadian citizenship ceremony wanted to do so wearing the niqab. A judge ruled that they could so. The prime minister seized on this and made it an election issue, which was pretty ridiculous seeing that since confederation in Canada, not one member of the civil service has ever asked to wear a niqab while on the job. So we're supposed to get all worked up about this imaginary person who works at the Department of Agriculture wearing a niqab."

Watch Rick Mercer in a video about making the wearing of the niqab an issue in Canada's election.

Tom Mulchair, leader of the far-left New Democratic Party (NDP), has moved his party to the right. He's promised no deficits, a balanced budget and $15-dollar-a-day day care for every Canadian. Mercer says, "His nickname is 'Angry Tom' and he's tried desperately to hide the fact that he's an angry man so he's spent most of the election with a very bizarre smile on his face."

Justin Trudeau, leader of the Liberal Party, is the son of Pierre Trudeau, one of Canada's most famous prime ministers. He's 43 but his opponents have written him off as 'not ready' and someone who's never done anything except teach drama — Trudeau spent three years as a school teacher. But Mercer says, "He's confounded all critics. He's now looking like he could very well form a government, something that I wouldn't have bet a dollar on six months ago."

The Conservative Party produced a campaign ad suggesting that Justin Trudeau had potential but was "just not ready." It ended with the quip, "Nice hair, though."

"I tell you, he is ridiculously photogenic," says Mercer. He's a great big tall handsome guy who can go out in public and 300 pictures of him can be taken and every one of them can be on the cover of a magazine. I mean, it is ridiculous but at the same time that works against him sometimes because he looks like a pretty boy."

The election is on Monday, the same day as Game 3 of the American League Championship when the Toronto Blue Jays will take on the Kansas City Royals. The Blue Jays haven't been in a championship since 1993.

"I'm 45 years old. I certainly remember walking the streets of Toronto the last time we won the World Series," says Mercer. "But there are many young men and women in my office who have no recollection of that."

So which Canadians will get to watch the game? Here's Mercer's answer.