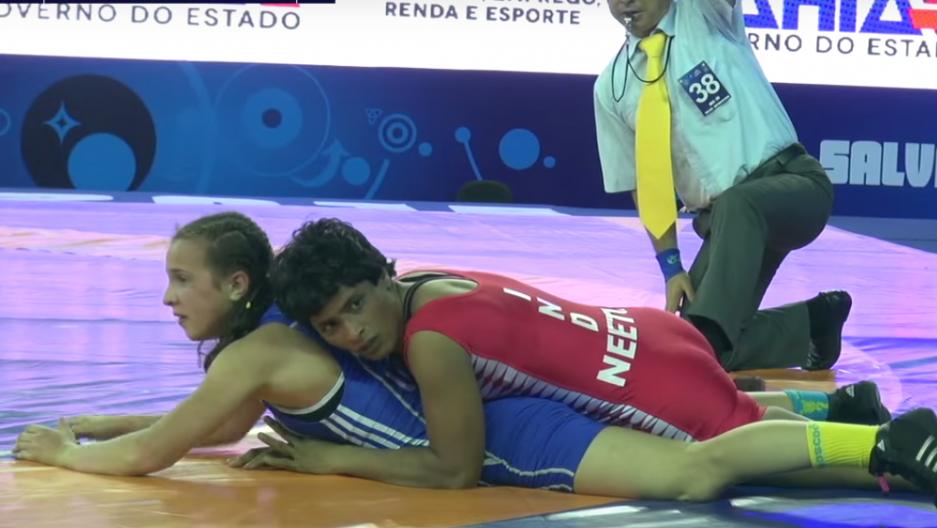 NEW DELHI, India — When the biggest female star in US martial arts, Ronda Rousey, announced that she was taking the fight to Hollywood this month, India’s latest wrestling heroine was most likely working in the fields or helping her two sons with their homework.

She is known only by her first name, Neetu — and she was once a child bride.

Forced into marriage with a 43-year-old, mentally challenged man by her cash-strapped parents when she was only 13, Neetu was the mother of twins before she turned 15. But she didn’t let an illegal child marriage or the repressive morals of her ultra-conservative village in the north Indian state of Haryana stop her.

Against the wishes of her parents, Neetu left her husband less than a week after their wedding. Even though she was almost immediately remarried, she refused to give up, according to her interviews with Indian media.

“Rowdy” Rousey would be proud.

Village elders barred Neetu from practicing at the local “akhara” — a training ground used by her town’s male wrestlers — because she was a girl. And her family didn’t want her to wrestle, either. So she used to sneak out of the house at 3 AM to go running so that she could be back at home before anyone else was awake, she told India’s NDTV. From tipping the scales at 176 pounds, she now weighs in at 105.

Child marriage has been illegal in India since 1929, though definitions varied. In 1978 the legal age of marriage was raised from 15 to 18 for girls and from 18 to 21 for boys, where it stands today, and in 2006 the Prohibition of Child Marriage Act increased the penalties for adult men who marry underage girls or anyone who promotes, permits or solemnizes a marriage in which the bride or groom is underage.

But Neetu’s story illustrates an unfortunate failure in implementation, as tradition trumps the law. The International Center for Research on Women estimates that 47 percent of Indian girls are married before they turn 18 (though the number to wed before 15 has fallen). With its huge population, therefore, India has the most child brides of any country in the world — one third of the global total, according to UNICEF.

While the problem is most common in the states of Bihar and Rajasthan, Neetu’s home state of Haryana may be witnessing an uptick in the number of child brides. A cultural preference for male children has resulted in one of the most skewed gender ratios of any state in India, making brides a valuable commodity and raising the financial incentive for poor families to force girls into marriage.

India has produced some of the world's top female wrestlers competing today, including Geetika Jakhar (top), also from Haryana state.

Now 21 years old, Neetu has tilled fields, worked a shop counter and sewn clothes to make ends meet, and even today she pretends to be a student to save on the fare for the hour-and-a-half bus journey from her village to the training center in the city of Rohtak.

“I became a mother at 14 and the family’s financial condition didn’t allow me to think about sport for the next two-three years,” Neetu told the Hindustan Times.

Encouragement from coaches, as well as the example of Indian boxer and Olympic medalist Mary Kom, inspired her to return, she says.

When she brought that first medal back to her village, the same village elders who’d barred her from the local training ground embraced her as their own homegrown champion. Her status as a local hero grew even further this August, when she represented India at the Junior World Championships in Brazil — even though she was eliminated in the first round.

“She never wastes time,” he told NDTV. “She works very hard at her training. If she can improve her technique, the results will show.”