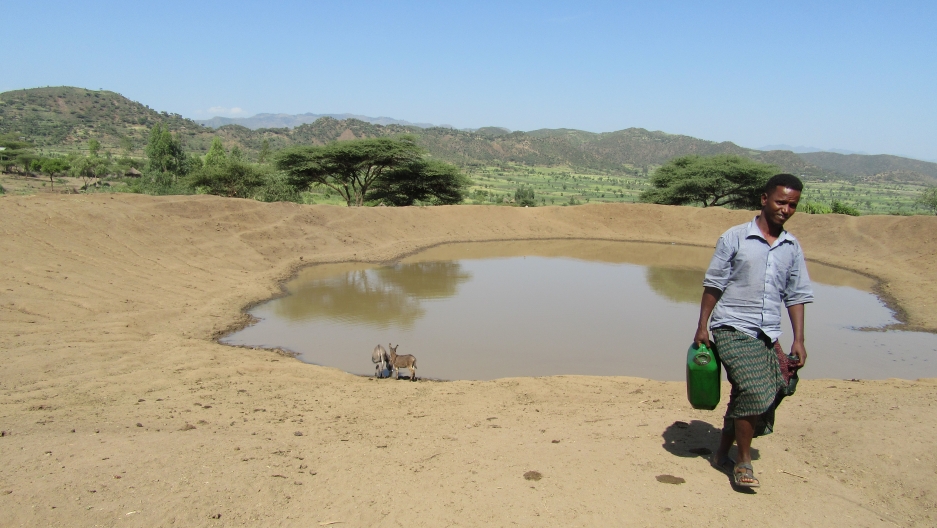 Farmers in North Wollo, the most drought-sensitive area of the country, say their crops have failed.
Credit: Arron Reza Merat
Share

NORTH WOLLO, Ethiopia — For decades past, poor Ethiopians lived at the mercy of a royal court that neglected them and a military junta that imposed upon them a dysfunctional command economy. When the rains didn’t come, hundreds of thousands of people starved to death.

Government officials say this year the drought is just as bad as those infamous events that sparked famines in 1965/66, 1972/73 and 1984/85. It’s harvesting time in North Wollo, the most drought-sensitive area of the country, and farmers here say their crops have failed. The annual meher rains fell only for three days. Hunger and malnutrition has risen sharply, affecting millions.

“The crops have not produced grain. They are useless even for the animals”

But Ethiopians are considerably more resilient to drought than in the past. They now live in the world’s fastest-growing economy, overseen by a government that has halved the poverty rate in 20 years by running Africa’s largest social protection program; allotting 70 percent of public capital to pro-poor sectors, principally agriculture; and doubling the size of the road network to connect farmers to markets and emergency responders to remote villages.

But this drought is now severely testing these systems.

Mohammed Yasin wears the plaintive expression of a man who is tasked with ensuring 1.6 million inhabitants living in the most drought-prone corner of Ethiopia’s north east get enough food to eat.

Mohammed Yasin, the Head of Disaster Prevention and Food Security of North Wollo, is tasked with ensuring 1.6 million inhabitants living in the most drought-prone corner of Ethiopia’s north east get enough food to eat.

“The harvest has been a total loss,” says Yasin, head of disaster prevention and food security for North Wollo, looking out of his window at the sunny street from the gloom of his dark office In Weldiya, the provincial capital. “Many, many people died in the past. But we now have early warning systems and programs to mobilize grain from areas of surplus to areas of scarcity. We will avoid this problem without evacuating areas.”

Yasin says more than half of North Wollo’s inhabitants have been identified for the targeting of food aid. Nationally, the United Nations says 7.5 million, out of a population of 94 million, are now going hungry and need food aid.

Eight percent of a nation’s population requiring such assistance is a sobering thought, but there is good reason to believe the situation could be considerably worse. In the 2010/11 drought that struck the entire horn of Africa, Ethiopians fared better than Kenyans — even more so than Somalis.

One international donor official in the capital Addis Ababa says that in 2011 “a mass fatality famine, which these weather conditions have caused in the past, was headed off by having structures such as the PSNP [the Productive Safety Net Programme] in place and a broadly effective response from government and donors.”

The PSNP, Africa’s largest social protection program, has been a key driver of Ethiopia’s anti-poverty campaign, along with a massive state investment in the agricultural sector and the near universalization of primary school education, according to UK think tank, the Overseas Development Institute.

Established in 2005, the PSNP welfare-for-work program now mobilizes around 6 million able-bodied men and women to work for five days a month on public infrastructure programs such as digging irrigation canals or building terraces for crops. In exchange, their households — and those of over a million less-able citizens — are provided with food or cash amounting to nearly 29 pounds of grain and almost 9 pounds of legumes for the leanest half of the year. 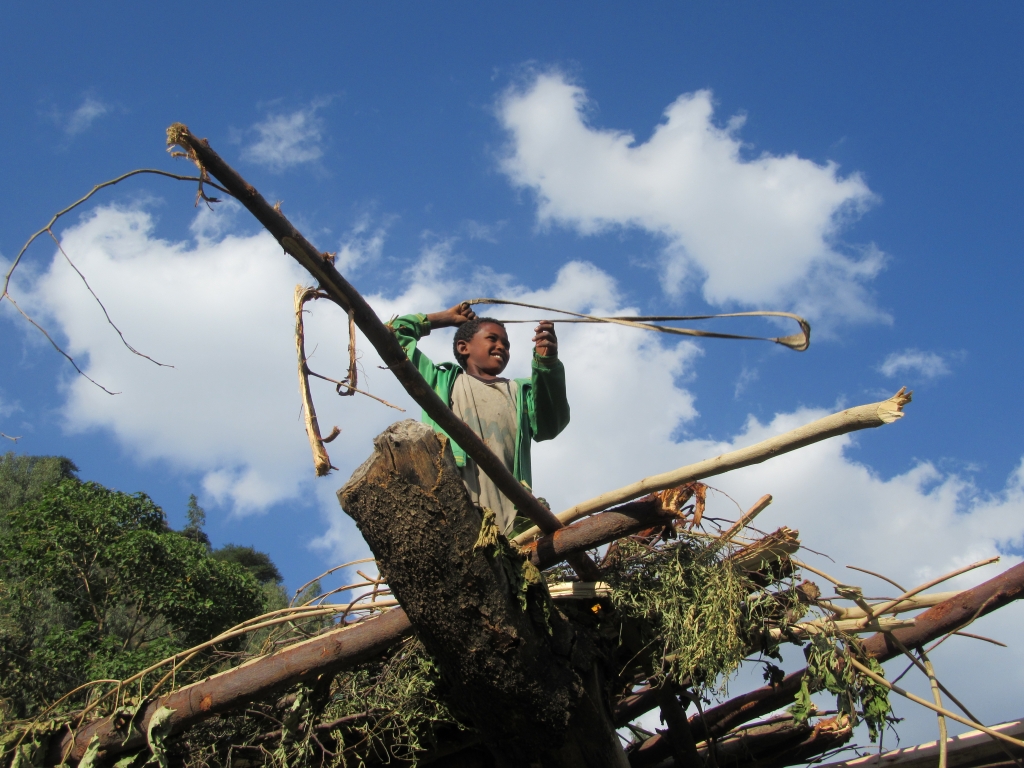 A young boy uses a slingshot to keep birds away from sorghum crops in North Wollo.

In the far northeastern corner of Wollo is Guba Lafto, a district comprising two valleys with eroded soils and erratic rainfall. The lowlands of the deep and vast valley have received only three days of rainfall this season. Despite the drought, the crops have grown tall and green, belying their fruitlessness.

“The rains didn’t come this year. The land will go yellow very soon … The crops have not produced grain. They are useless even for the animals,” says Gumat Hussain, a Guba Lafto local chief flanked by two guards sat with AK47s across their knees.

He points to his field of retarded sorghum crops. “It is very severe here. People here are forced to sell their property — their goats and oxen. They don’t have any other options. They travel further with their animals to find them water but their animals are dying.” 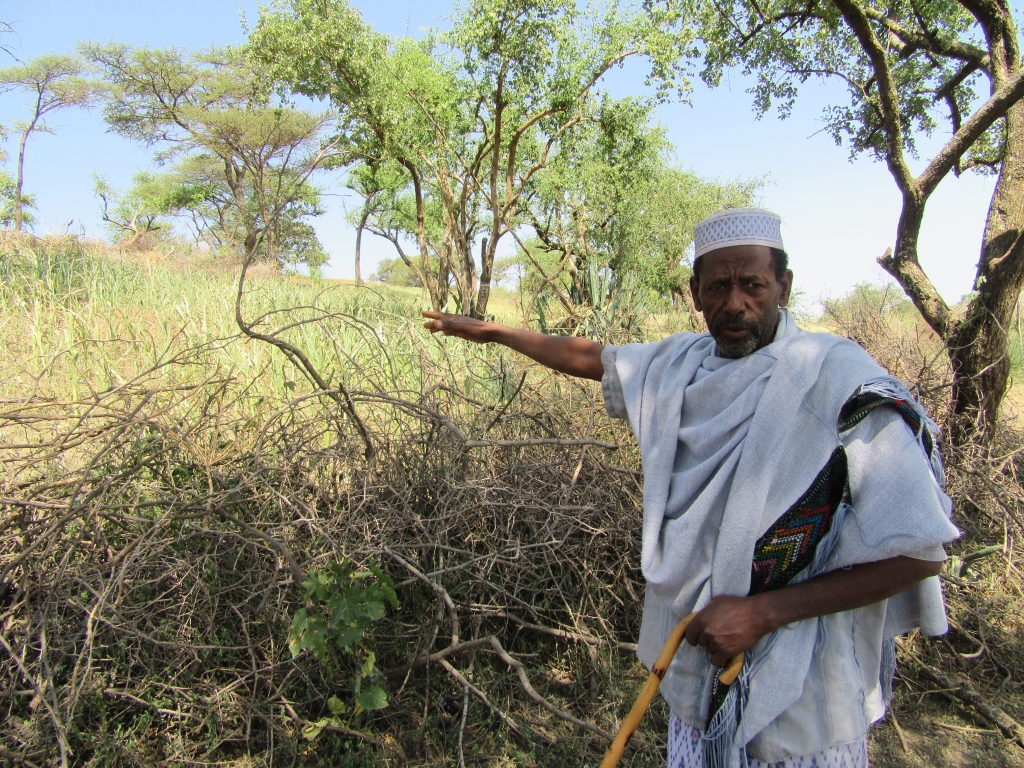 Down the road PSNP workers are digging a water storage pond to help keep the animals alive. Mahmood Mohammed, who is responsible for managing some 400,000 people on the PSNP program in Guba Lafto and two surrounding districts, greets the laborers with the air of a teacher greeting his children.

“Graduates” is the term the government applies to people who have weaned themselves off the PSNP and have, by Mohammed’s assessment, become resilient to “moderate shock.” They have largely moved on from subsistence farming, “graduating” on to more entrepreneurial activities that diversify their income into higher-value lines of work.

One such farmer, Mulubrhan, lives in the highland village of Hanging Mule, named after an errant beast who hanged itself on its own bridle after falling from a narrow path. He shows off his eucalyptus farm; his dormitory, which he rents out to students for under $4 a month; and a mud-hut that operates as a granary (he owns it with a partner).

In 1985 during the famine, the communist Derg military government shelled his house, leaving him destitute. He said that after years of poverty, making ends meet by small trading, the social safety net gave him a foundation on which to build.

“Before my focus was only on feeding my six children,” he said. “The PSNP helped me to focus on making money.”

Some 25 miles south of Hanging Mule is the village of Hen Tax, named after a levy the Italians placed upon its residents during Mussolini’s tentative foothold in Ethiopia in the 1930s and 1940s. On the hills between the village and a small stream lives Tsehaynesh, a single-mother of two and recipient of the PSNP, who owns 70 coffee trees that grow in moist soil and a single fat cow. Her income from the coffee and milk is topped up with PSNP funds, which she earns by working fidve days a month building terraces in which teff crops, used to make Ethiopia’s staple spongy flat-bread injera, are grown.

“It’s not very hard work,” she says, laughing at her own understatement. “I am a strong woman.”

On the surface, North Wollo appears fine but the failed harvest portends hardship ahead. The annual PSNP contingency budget has been released early to help those in need now and the government has allocated of $33m dollars for emergency relief.

The PSNP is helping to buffer poor Ethiopians against crop failure for now, but government officials say that state coffers alone will not be enough to fully protect citizens against the drought. 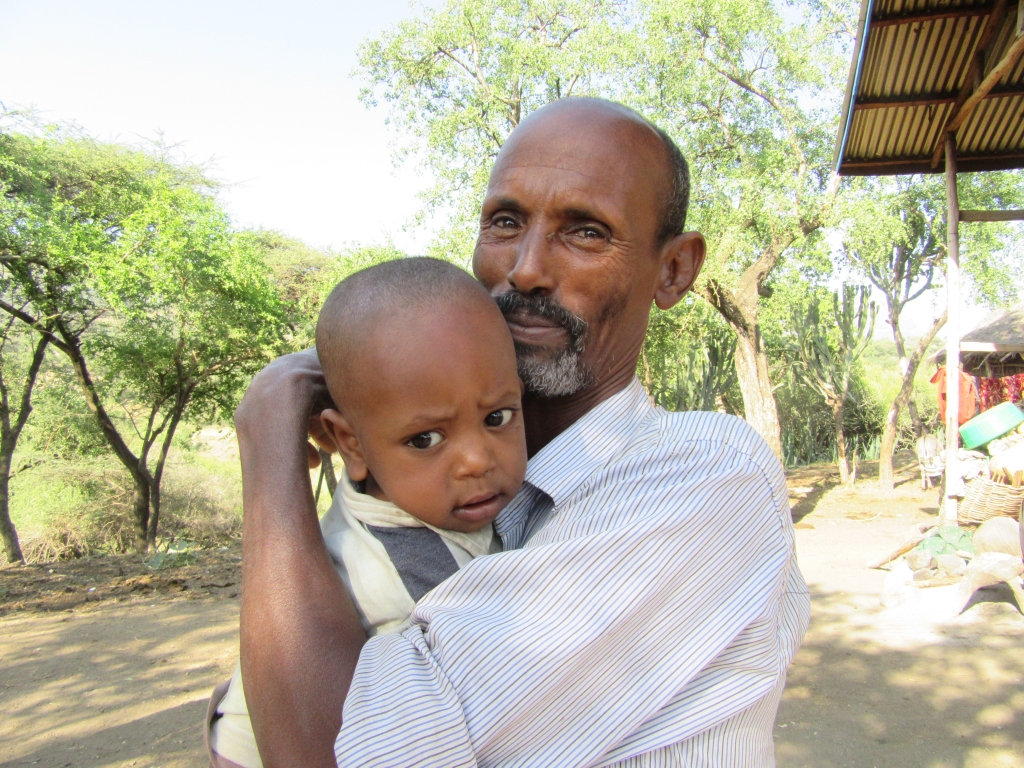 Mulubrhan, a eucalyptus farmer and beneficiary of a government work program.

The first veritable step Ethiopia took on food security was in 1973, when it borrowed from emergency response systems from India and Botswana to form its Relief and Rehabilitation Commission.

The population was 31 million. Since then the country has achieved incredible feats, such as halving its poverty rate and developing a sophisticated and responsive food security system. But since 1973 the population has tripled, now hovering under 100 million and climate change has begun to bite, particularly in the north and east. The system is running to a standstill.

Ethiopia needs financing from international donors, which as of yet has not been forthcoming. Despite recent growth and gains, Ethiopia is still an extremely poor country and it will take time to escape poverty and the need for external assistance.

The country's disgruntled agriculture minister suggested last month that the refugee crisis may have averted the world’s eyes from the impending crisis in Ethiopia. Perhaps he is right.