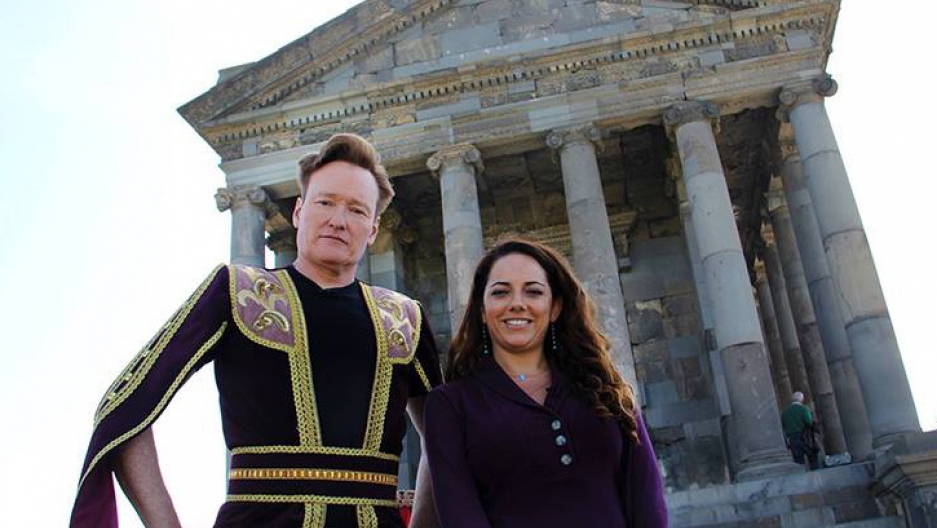 Have you heard this one? So Conan O'Brien walks into a bar in Armenia…

It’s not a joke. For real. The late night talk show host was in Armenia for four days earlier this week filming an episode of his TV show that will air in November.

He told RFE/RL's Armenian service, "This all happened because I have an assistant who I've worked with for five years, Sona Movsesian, and she is always very active on behalf of the Armenian community of Los Angeles,  and she is always talking about Yerevan." 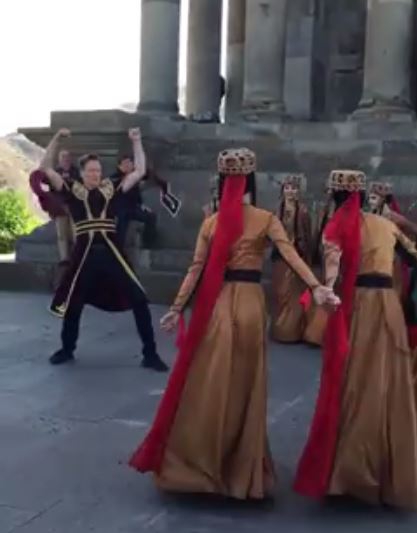 “Actually he did pretty well,” says Narine Daneghyan, a journalist in Yerevan, who retweeted photo taken of Conan as he tried to learn to dance Armenian traditional dances. ”He was dancing near the Temple of Garni, an ancient Hellenistic temple that dates back to the 1st century. Conan was dancing the Kochari which is one of the most famous traditional Armenian dances and I think he was doing quite well for the first time.”

Daneghyan says Conan could have also been inspired by the much-hyped visit to Armenia by the Kardashians and Kanye West back in April. In any case, Conan seems to have quickly made friends in Yerevan, says Daneghyan, as many of her friends managed to have selfies taken with him. Several said that Conan seems very open-minded, and very positive.

While not too many Armenians knew anything about Conan O’Brien a week ago, now they think he’s very cool, says Daneghyan. “There is a joke nowadays in Yerevan that he’s not really Conan O’Brien but rather Conan Obrayan.” She explains the ending ‘yan’ or ‘ian’ is a typical surname in Armenia and that Conan Obrayan is obviously an American TV celebrity who has Armenian roots.

I'm having a pretty surreal week in Armenia with my boss @ConanOBrien. I can't wait until you all see our adventures #ConanArmenia

Ever the savvy traveller, O'Brien also picked up on another Armenian tradition: Men often walk with their arms linked together. "You don't see that in the US," he told RFE, “and so when you first see it here, you think: Why are they doing that? But then, I think, that's a great idea. So, I started walking with one of my producers. We started linking arms and I actually thought: 'This is fantastic.' We should adopt this in the West. It's time for us to catch up."

Conan even did a traditional Armenia dance during his visit.