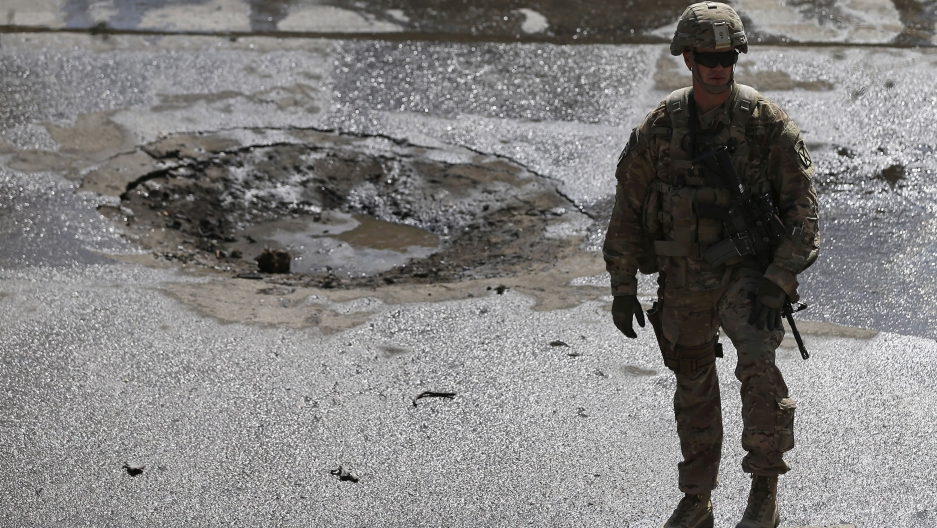 A NATO soldier stands at the site of a suicide car bomb blast in Kabul, on October 11th. A suicide car bomber targeted a convoy of foreign troops in the Afghan capital during rush hour-traffic, flipping an armored vehicle on its side. No fatalities were reported.

America's longest war just got longer. And veterans are divided on whether that's a good thing or not.

President Obama announced Thursday what he calls an "adjustment" in the US military presence in Afghanistan, all but spelling the end of his plan to bring almost all American troops home from Afghanistan before he leaves office.

Whoever succeeds the President will now find several thousand US military personnel still deployed in Afghanistan once he or she is inaugurated.

"This modest but meaningful extension of our presence, while sticking to our current narrow missions, can make a difference,” said the President. “It's the right thing to do."

Greg Jaffe, of the Washington Post, who has covered Afghanistan for years says he's not sure "modest" is the word he would use. "The plan had been to go to a Kabul-based force of about 1,000 ... this will put troops a little closer to harm’s way,” adds Jaffe. "They’re not going to be in direct combat. But they will be training and advising Afghan forces.”

Afghanistan's Taliban and ISIS have the same funding model: Drugs

President Obama says the core goal is to prevent Afghanistan from becoming a safe haven again for al-Qaeda or other groups that might want to attack the United States.

We reached out to our online community of veterans about the announcement, and asked if they think US troops staying on in Afghanistan is a good idea, or whether the United States should cut its losses. The several hundred responses were divided pretty evenly between ‘stay’ and ‘go.’

"No military in history has ever held Afghanistan. Pull out now."

"Leaving now would be more dangerous for Afghanistan than a continued US presence. Unfortunately, it seems necessary that we stay."

A veteran of Iraq, James Millard, agreed with the President and raised concerns that a pullout of Afghanistan could lead to something similar to we're currently seeing in Iraq. "We owe the people of Afghanistan an amount of security that is missing in the Middle East. I'm not confident that the Afghanistan government could handle an insurgency like what happened to Iraq once we pulled out."

Former Marine Captain Graham Pulliam, who served in both Iraq and Afghanistan, commented that “step one of warfighting 101 is don’t tell the enemy when you’re leaving.”

“A key element to all of our military involvement has to be what we’re telegraphing to our allies and our enemies, and those that might become our enemies,” added Pulliam. “They need to understand that we’re in it for the long haul. We’re in it to accomplish the goals that we stated at the beginning.”

“The next time that American men and women go into harm’s way, what is our adversary going to think, looking at the Iraq and Afghanistan situations? Are they convinced that we’re going to stick it out?” he added.