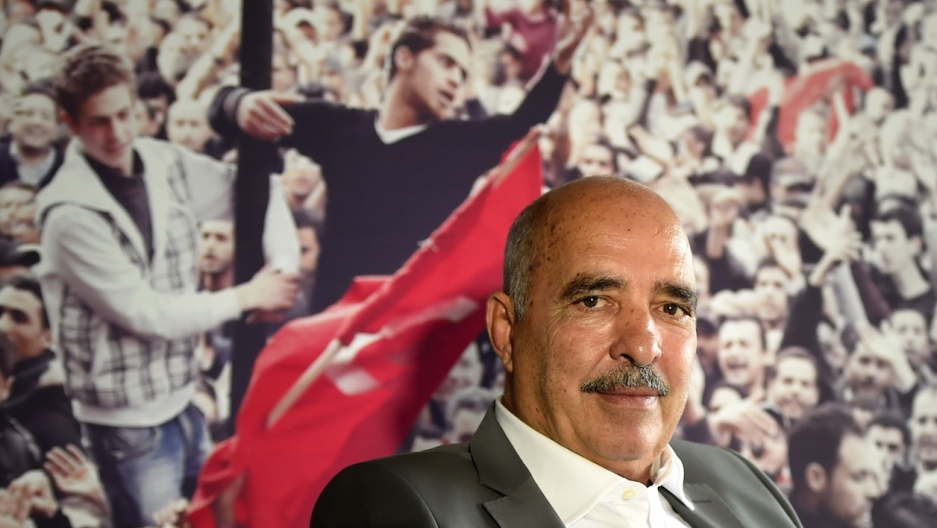 President of the Tunisian Human Rights LeagueAbdessattarBenMoussa poses for pictures in Tunis on Oct. 9, 2015, after he was awarded the 2015 Nobel Peace Prize with other members of Tunisian NationalDialogueQuartet.
Credit: FETHI BELAID
Share
Last week, the Nobel Peace Prize for 2015 was awarded to a group of Tunisian civil society leaders — the National Dialogue Quartet — for their "decisive contribution to the building of a pluralistic democracy in Tunisia."

The Nobel Committee has been derided in previous years for its choice of honorees, including the decision to award US President Barack Obama a Peace Prize just eight months after he assumed office in 2009. Geir Lundestad, the secretary of the committee at that time, later admitted he regretted the decision.

This year, however, there has been little dispute over the recipients’ peace-making credentials.

In 2013, Tunisia appeared poised to descend into civil war and infighting. Less than two years after the Jasmine Revolution that ousted President Ben Ali and sparked the Arab Spring uprisings across the region, much of the initial optimism for Tunisia’s future had waned. The future seemed bleak for the "Pearl of the Mediterranean."

But as negotiations between Tunisia’s political leaders reached a stalemate, the Quartet successfully brought Islamist and secular political parties alike back to the table. It successfully brokered a deal that yielded a technocratic caretaker government, a roadmap for elections, and the creation of a commission to oversee the electoral process. The Quartet played an invaluable role in "selling" the constitutional development process to the Tunisian public, collaborating in a nationwide educational campaign.

Fair elections in late 2014 yielded a peaceful transition of power, and the new constitution adopted in January 2014 is the most progressive in the region in enshrining women's rights and the foundations of democratic governance.

The award has many Tunisians elated, and rightly so. But there is little room for complacency.

Despite the significant progress made by the diminutive Maghreb country since 2011, extremism appears to be on the rise. Tunisia was rocked by two deadly terrorist attacks within the space of three months this year. The first, at one of the country’s preeminent museums, left 21 people dead at the hands of three armed attackers. The second, at a hotel in the tourist resort-city of Sousse, killed 38.

Back in 2011, the Tunisian military was widely celebrated for its refusal to heed President Ben Ali’s orders to fire on demonstrators. Decades earlier Tunisia’s first post-independence president, Habib Bourguiba, had intentionally kept the military weak, as did his successor Ben Ali, wary of the threat of a coup d’état. Some argue that the relative weakness of the army in Tunisia — compared to the armed forces in Egypt or Yemen, for example — was a decisive factor in the country’s successful democratic transition.

But, facing a "high threat from terrorism," do the Tunisian security services now possess the necessary resources to protect the people? On Monday afternoon, just three days after the Quartet was awarded the Nobel, terrorists killed two government troops and injured a further four at Jbel Semema, close to the border with Algeria.

A resolution passed by the House Foreign Affairs Committee in September calls on the US government to assist Tunisia in "counterterrorism operations and in security sector reform."

Yet the assistance the US gives Tunisia is dwarfed by the technical and operational support and military funding it provides to other countries in the region. Neighboring Egypt received $1.3 billion in foreign military financing and training in fiscal year 2014. Tunisia was granted just $22 million.

While the Obama administration’s budget request for the coming year would raise funding for security sector reform in Tunisia to over $60 million, this is still less than 5 percent of the investment made in Egypt — where the democratizing hope of the Arab Spring was crushed by a military coup in 2013.

Amid persistent insecurity, Tunisia has proved a fertile recruiting ground for the Islamic State (IS). By some estimates, Tunisians make up the single largest group of foreign jihadis currently fighting in Syria and Iraq. In 2014, the Tunisian government acknowledged that almost 2,500 of its citizens had traveled to Syria to join IS.

The Tunisian government and international community continue to grapple with this question. Perhaps the single most powerful explanatory factor is the state of the Tunisian economy: the tinderbox that, once set alight, sparked the 2011 revolution in the first place.

Even for Tunisia’s educated young leaders, opportunities remain few and far between. More than 600,000 Tunisians are unemployed, almost half of whom are higher education graduates. In the first quarter of 2015, the unemployment rate for university graduates rose as high as 30 percent.

The situation is particularly dire for Tunisia’s women. Despite the progressive legal framework provided by the new constitution, female labor market participation in Tunisia has reached just 27 percent, compared to 70 percent for men.

Initiatives such as Harvard Fikra offer some hope. A new partnership launched between Harvard University and the Tunisian government — "fikra" is Arabic for "idea" — connects young Tunisian leaders with experienced international mentors, internships, apprenticeships and university scholarships. Investment in such programs will be important for championing progressive voices and stemming the tide of extremist sentiment.

Former Tunisian President Moncef Marzouki has warned that "the dreams of the Arab Spring have been dashed." While the Quartet’s Nobel Peace Prize is an important symbolic moment in Tunisia's post-revolution trajectory, it will take addressing rising insecurity, extremism and economic stagnation to keep the dream alive.