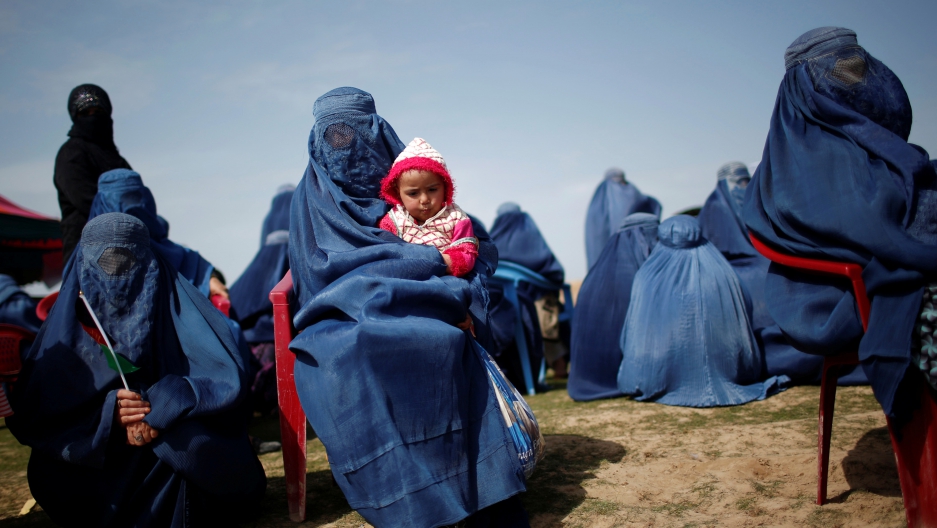 When the Taliban overran the city of Kunduz last month, their fighters pounded on doors, carrying long lists. "They were looking for women who had any kind of job outside the house," says Manizha Naderi, director of Women for Afghan Women.

"They actually had a hit list. They knew addresses. They knew that, at 7:30 in the morning, a car was coming to pick the women up and take them to their offices," she says.

Naderi is based in Kabul, but her group runs a shelter for abused women in Kunduz. It also operates a family guidance center and a center for the children of women in the Kunduz prison. Naderi says the Taliban went to the home of one the caretakers of the group's facilities.

"She was hiding in the basement. Her husband confronted the Taliban and said 'My wife is a housewife, she doesn't work outside of the house,'" Naderi says. "They shot him in the head, point blank."

Most of Naderi's staff had fled the city by then. So when the Taliban broke down the doors of of the Kunduz women's shelter, they found no one there. That's when the insurgents destroyed the desks, stole the computers and cars — and then set fire to the building.

"Every single educated woman, or even the uneducated women who had jobs outside of the house, had fled Kunduz," Naderi notes, so "I guess they got angry that nobody was there."

The Taliban was especially intent on finding Dr. Hassina Sarwari, who has been the group's Kunduz director since 2010.

"She was the very first people they came to look for," Naderi says. "They invaded Kunduz at 2 am. At 9 am, they were already in her house."

But Sarwari had already escaped the city.

Even now that the Afghan army has control of Kunduz, Sarwari, who has two young girls, isn't sure it's wise to return. She's worried about a warning the Taliban has issued, declaring that Sarwari "would be hanged in the main circle in Kunduz city," if she sets foot there again.

But Naderi says some of the women who work for her group are willing to return to Kunduz.

"We at Women for Afghan Women are definitely committed to going back and starting our shelters and our family guidance centers," she says. "We will do that in due time."

Naderi was buoyed by news today that the White House plans to keep 5,500 US troops in Afghanistan at least until 2017.

"This is what we wanted," she says. "The Taliban now know that the US isn't going anywhere, that they have the Afghan security forces' back. It will definitely make an impact."