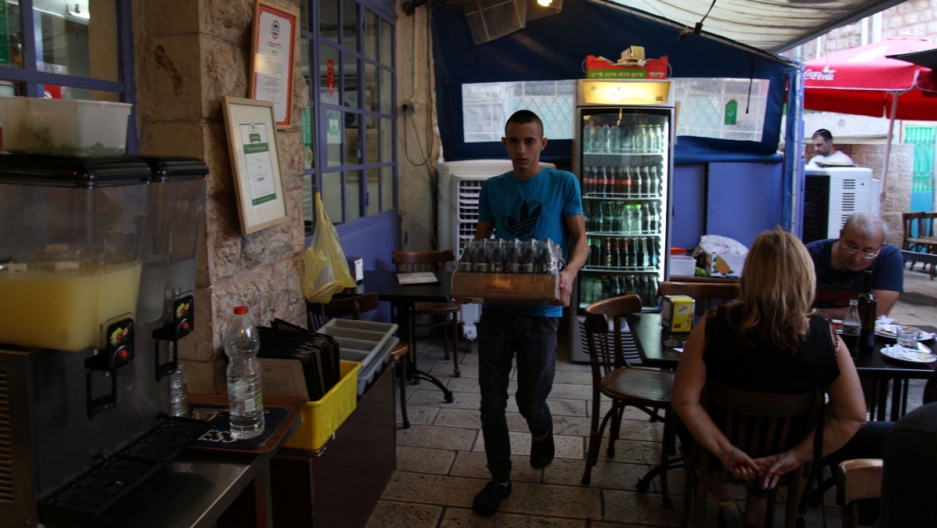 A Palestinian worker at Azura in Jerusalem.

When an Israeli goes to work in the morning, chances are that the bus or taxi she takes is driven by a Palestinian. The office she works in is likely cleaned by Palestinian janitors, her medicine is filled by Palestinian pharmacists, and when she goes out for her lunch break, Palestinians are the ones preparing her food and cleaning the dishes.

A rash of deadly attacks in Jerusalem has Israelis and Palestinians ever more wary of each other. Yet they are inextricably intertwined in each other’s lives.

In this city divided between East and West, half of Jerusalem’s Palestinian workforce relies on Israeli jobs for their livelihood. And the infrastructure on the Israeli side of town would collapse without the Palestinians who keep it intact.

About 75 percent of the employees working at hotels in Jerusalem are Palestinian. So are 66 percent of the city’s construction workers and more than half of the public bus and taxi drivers, according to researcher Marik Stern of the Jerusalem Institute for Israel Studies.

One of Jerusalem’s most beloved restaurants, Azura, offers an intimate peek at this co-dependence.

“When you say Azura and Jerusalem, it’s like in the same breath,” said Moshe “Moshiko” Shrefler, whose family has been serving home-style comfort food to the denizens of Jerusalem since 1952 in its restaurant, Azura.

Israelis may run the establishment, but the ones who keep the restaurant running — the line cooks, potato peelers and dishwashers — are all Palestinians from East Jerusalem. 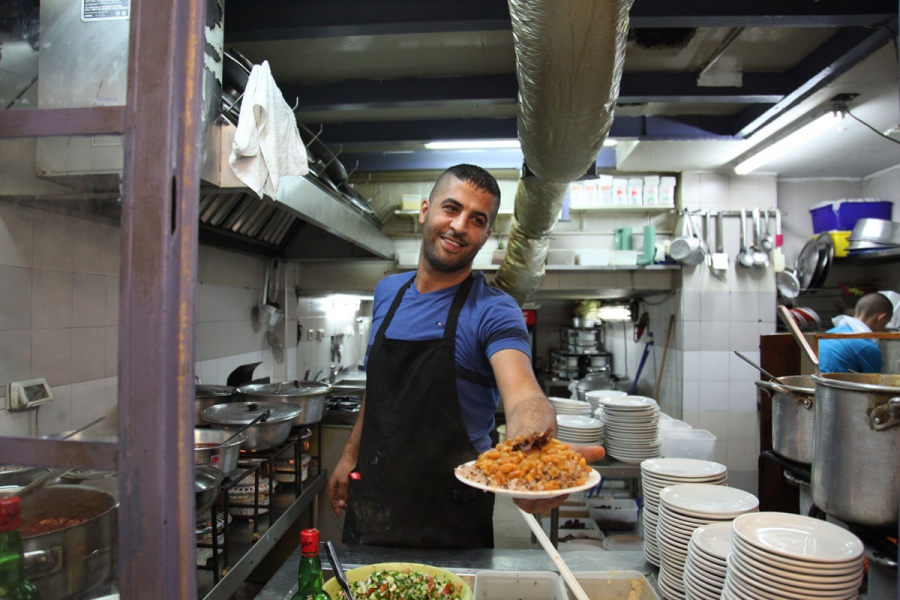 A Palestinian cook at Azura in Jerusalem.

“This is what I don’t understand,” said Barbara Arama, who was eating a bowl of beef dumpling soup there. “You work in Israel, you have Israeli friends. And the other side, you want to kill us! It’s ridiculous.”

She doesn’t like to dwell on it when she goes out to eat.

“I don’t think about whether they spit in my food,” Arama said. “If I think, I don’t eat in any restaurant. Most of the [the workers are] Palestinian.”

Moshiko Shrefler, who helps run his father’s restaurant, usually has no time to breathe. But one afternoon this week, he smoked Camel cigarettes at a table outside. Most of the tables were empty; customers are scared to go out to eat downtown, he said.

“We throw a lot of food in garbage in the last few days,” he said.

Every morning at 5 a.m. for the last 15 years, he has arrived at the restaurant to start preparing the signature kubbe dumplings. The first Palestinian employee arrives by 6 a.m. The Palestinian employees do the hard work that Israelis don’t want to do.

“We don’t discuss politics in the kitchen,” said Shrefler. “I have business with them. That’s the way I see it. Strictly business.”

But the thought has crossed his mind that one of his employees could attack him in the kitchen, he said.

“There are some people who have a clean heart,” Shrefler said. “And you have some people — I don’t know what they’ve been through — but you can see the hostility on the face, you know?”

Here’s what one of the dishwashers went through a couple days ago: Rami Frukh says he was stopped by Israeli officers three times on his way to the restaurant. One of them, he said, threw him to the ground and told him, “All Arabs are terrorists.”

He said he supports the Palestinians who have stabbed Israelis in the past few days because there is “no other way to liberate” his country. He said he would do the same. When pressed, he got quiet and smiled sheepishly.

But he said he respects the Israelis he works for.

“There are good Jews and there are racist Jews,” Abu Sbitan said. “There are also good Arabs and bad Arabs.”

Shrefler came to the kitchen window and joked in Arabic with the Palestinian who’s worked there the longest — Mosab Almator, 31, who lives in the Shuafat refugee camp in East Jerusalem.

Almator has visited the Shrefler family home in west Jerusalem, and Shrefler’s family visited Almator in East Jerusalem when his father died five years ago. Almator’s mother and wife and kids come to West Jerusalem to eat at the restaurant.

But things are different now. Almator’s mother keeps calling him on his cell phone to make sure he’s safe; a few days ago, Israeli vandals scrawled “Death to Arabs” on Palestinian vegetable stalls near the restaurant.

One of the employees is getting married this weekend in East Jerusalem, but the Israeli owners probably won’t be there — for their own safety.

The city is now governed by a geography of fear. East is East, and West is West. But in Jerusalem, the two depend on each other.