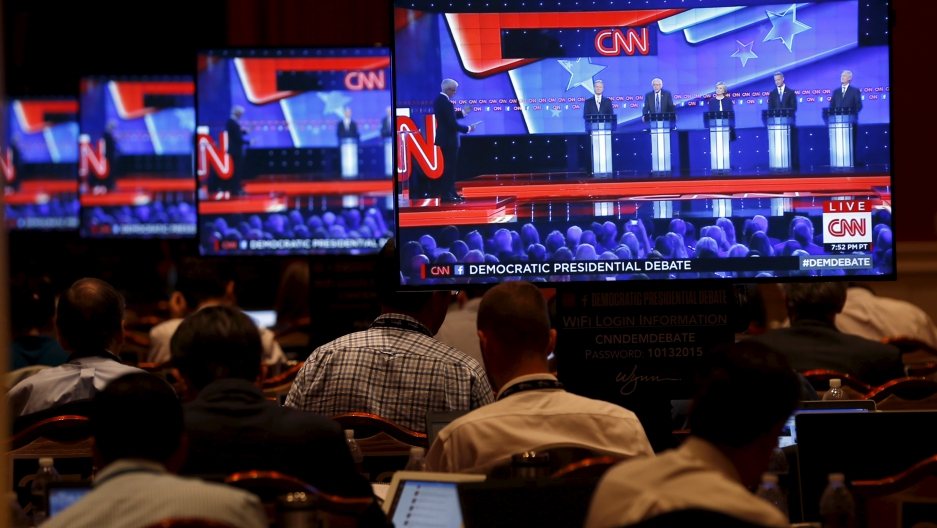 Not too long ago, "liberal" was a dirty word in America. Rewind to February 2008, and you'll notice that President Barack Obama defended himself against the word during an appearance in Austin:

Doth the president protest too much?

Well, times are changing, and it appears that "liberal" is no longer something to defend one's self against. In fact, a new study from the Pew Research Center finds that there are now more self-identified liberals than self-identified moderates among rank-and-file Democrats.

Though Democratic voters are embracing the term, Democratic politicians aren’t jumping on the “L word” bandwagon just yet, says Kathleen Hall Jamieson, the director of the Annenberg Public Policy Center at the University of Pennsylvania.

“The word liberal isn’t usually used the way it was used in the past,” she says. “When you ask people, ‘Are you conservative or liberal?’ you’re forcing a choice. But if you listened to the debate last night, you heard the candidates self-identify not as liberal, but as progressives.”

According to Hall Jamieson, after stumbling in 2008, President Obama led the trend of Democratic politicians identifying as progressive, particularly when he laid out his economic vision in 2012, saying: “We can build an economy where hard work pays off again — where everyone gets a fair shot, everyone does their fair share, and everyone plays by the same rules.”

“I think the tax and spend association with the word liberal made it harder for candidates to use it,” Hall Jamieson says. “They didn’t abandon, however, the policies underlying that philosophy, I think they’ve just relabeled them ‘progressive.’ And what you saw on the debate stage last night was a distinction between the places where I think Hillary Clinton is comfortable — she’ll call herself a moderate or a progressive — and the place where Bernie Sanders is comfortable — he is to the left and you might say more liberal, though he calls himself a Democratic socialist.”

In the modern era, a progressive political, social and economic agenda has been associated with President Franklin Delano Roosevelt and his New Deal. But Hall Jamieson says the term has deeper historical ties.

“Originally, philosophically, it’s associated with the Enlightenment and a respect for science,” she says. “If you want to take those associations forward and say what’s the divide between the Democrats and the Republicans on climate change, the word progressive is carrying some positive associations, including a respect for science and the belief that we need to employ it in public policy.”

Even though more registered Democrats identify as liberal, it’s unclear how this plays out at the ballot box. Hall Jamieson says one must look to past trends.

“Here are some questions you’d want to ask: ‘How have you voted in the past?’ And then you’d look for indicator votes,” she says. “If for example you’re in California and you’ve had a choice in primaries between candidates and there’s one further to the left than the other, [you’d ask] ‘Where did you go?’ In general, one can say, except on gun control, that Hillary Clinton is the more centrist candidate. If you find a voting history that tips toward the left over the center in primaries, you’re more likely to have a Sanders voter.”

Though voters may identify as liberal, that doesn’t mean they’ll always vote for the most liberal candidate. When it comes to Bernie Sanders, for example, Hall Jamieson says that a voter may favor him but feel unsure if he can win the general election, something that may shape their ballot selection in a primary.

“There are people who like his ideology, but think he’d be sacrificed in a general election — another [George] McGovern-like candidacy,” she says. “You’re beginning to hear the press ask the question of individuals in interviews whether they, a Democrat, believe that Sanders can win. As they say ‘no,’ they’re increasing the salience of winability as a criterion. If you ask a Democratic voter for a choice is between a winable and non-winable candidate, if that answer becomes Hillary Clinton, ultimately, any place in a gray zone, assume that you’ve got a Hillary Clinton vote.”